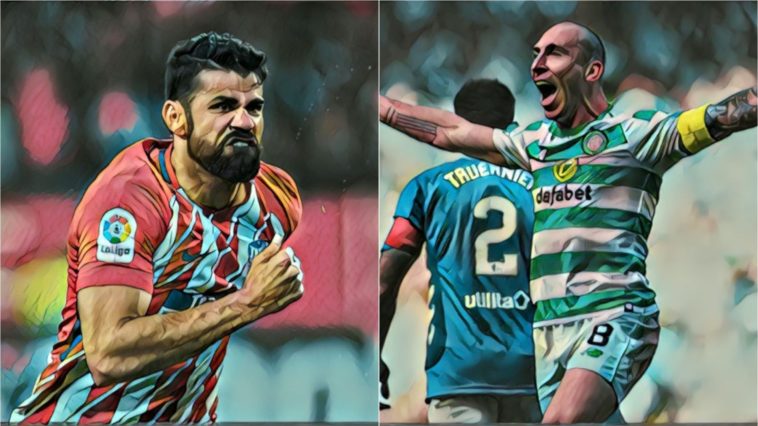 Gobby agitators, sly snakes, pantomime villains; this is how we choose to describe the players who employ the ‘dark arts’ in football, but they are just polite ways of talking about the shithouses that pervade the game at all levels.

While they might be more common the lower down the food chain you go, you’ll find they occupy a spot in some of the best teams in the world; the biters, the scratchers, the wind-up merchant, they have their place and know what their job is.

They are the antiheroes of the sport, and it wouldn’t be half as interesting without them.

Here is our ultimate shithouse XI:

It’s actually kind of hard to pick out goalkeepers that fit the shithouse mould, so we had to go all the way back to the eighties to find one. Harald ‘Toni’ Schumacher was a wildly successful footballer over the course of a 24-year career, which included Bundesliga wins with FC Koln and Borussia Dortmund, two Word Cup finals, a European Championship winners medal and being a two-time German Player of the Year.

But his entire career is widely remembered for one single moment: cleaning out Patrick Battiston in the classic 3-3 draw between West Germany and France in the 1982 World Cup semi-final.

For all his silverware and undoubted talent, Sergio Ramos is a dirty rotten player.

While most players on this list are sneaky enough to disguise their sh*thousery, Ramos is not. After receiving his 25th career red card in February 2019, he officially became the most ill-disciplined player in the history of Europe’s top five leagues.

A centre-back who has hurt a number of players in his career, most notably in 2010 when he broke the leg of Aaron Ramsey in a Premier League game between Stoke City against Arsenal. Playing for a Tony Pulis side didn’t help his reputation too much either.

Once alluded to as the “most hated man in football”, English-born Australian international Kevin Muscat is perhaps the dirtiest player the game has ever known. Peter Crouch admitted last year on his podcast that Muscat, who received 12 red cards in his career, was the only player he ever feared.

Muscat was also responsible for this brilliant scene in a Sky One documentary about Neil Warnock, who was managing Sheffield United at the time in a match with Millwall:

When Warnock calls you shithouse, you know you’re a bastard.

Read: Five of the Premier League’s hardest men ever

One of those players who took no sh*t, Vinnie Jones was not afraid to put in a crunching challenge when the moment called for it. And that moment could come at anytime, including the third second of a game while playing for Chelsea in 1992. He infamously grabbed Paul Gascoigne by the genitals in one match, and was sent off 12 times in his playing days. The former Welsh international used his hard man reputation to launch a Hollywood career once he retired from football.

The Dutch defensive midfielder was the kind of aggressive, no-nonsense tackler that attacking players hated to come up against, using whatever body part it took to stop the opposition. In 2007 he was even caught pinching a Stuttgart player between the legs while playing for Bayern Munich. Fittingly, he was red carded in his final game for PSV Eindhoven in 2013

Scott Brown might just be the most joyfully shithouse player of all time. The former Celtic midfielder is not the most technically proficient of footballers, and for years it seemed as if he was a hindrance to his side’s cause rather than an asset. But he eventually found his role within the team; winding up the opposition with ease until one of them loses their cool.

See Also: Five of the weirdest reasons for getting sent off

For a long time, Lee Cattermole had more red cards than goals with the former Sunderland midfielder’s reputation for ill discipline proceeding him throughout his playing days. Cattermole was a yellow card magnet, picking up 77 during his career. It’s actually debatable whether he is a proper shithouse, or just a really stupid player who couldn’t help making rash tackles.

Few Premier League players have been as disliked in the past 20 years as one Joseph Barton has been. There are so many examples we could dredge up, but there are only two we need to: his stubbing of a cigarette in a teammate’s eye and getting a 12 match ban for outright assaulting Manchester City players on a dramatic finale for the 2012 season. Barton’s career was effectively ended by an 18 month ban, later reduced to 13, for betting in 2017.

The Senegalese striker isn’t a shithouse in the traditional sense, in that he didn’t often play dirty to gain an advantage. But he was a scumbag, a villainous figure who repeatedly lived up to his own reputation time and again. The former Liverpool player was accused of spitting at fans of Celtic, West Ham and Middlesbrough, spat on the face of Portsmouth centre-back Arjan De Zeeuw, and spat towards Blackpool goalkeeper Matt Gilks while turning out for Doncaster Rovers. Charming.

Diouf was also investigated for using racial slurs against a ball-boy and directing an offensive gesture at Brighton fans after scoring a penalty for Leeds United.

See Also: 12 of the biggest upsets in international football

Diego Costa is the man who makes shithousery look like an art form. Despised by opposition fans, although pretty much everyone else is entertained by his antics, which can be deadly effective.

When Chelsea met Arsenal in 2015, Costa spent the game winding up Laurent Koscielny before doing the same to Gabriel Paulista, who lashed out and received a red card soon after. The Blues won 2-0n that day. Job done.