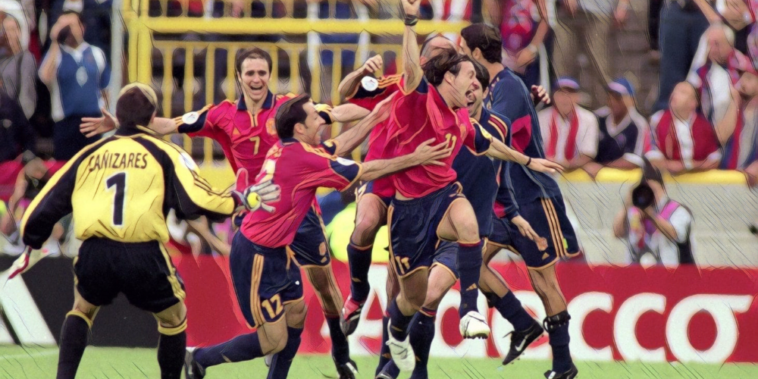 Football fans were treated to a sensational day of action at Euro 2020 on Monday, the two last-16 ties resulting in two all-time classic European Championship contests.

Spain almost capitulated before edging Croatia in an eight-goal thriller after extra time in Copenhagen, before Switzerland produced the upset of the tournament to beat France on penalties, following a pulsating 3-3 draw that saw the Swiss snatch a dramatic stoppage-time equaliser.

There were 14 goals across the two games with Euro 2020 now averaging more goals-per-game than any other previous edition of the tournament, and following the latest action we’ve decided to look back at some of the Euro’s greatest ever games.

Here are five of the greatest European Championship games ever.

The very first European Championship game produced an absolute classic with Yugoslavia’s 5-4 victory over France remaining the highest-scoring game in the competition’s history.

Just four teams contested the inaugural tournament – then known as the European Nations’ Cup – with France and Yugoslavia playing out an end-to-end encounter in the first fixture.

Yugoslavia took an early lead through Milan Galic, though France hit back immediately to level courtesy of Jean Vincent’s equaliser, before taking control of the contest through efforts from Francois Heutte and Maryan Wisniewski.

Ante Žanetić reduced to deficit to one goal for Yugoslavia, but Heutte’s second made it 4-2 to France who led comfortably heading into the final quarter of an hour.

However, Yugoslavia hit back in stunning style, scoring three times within the space of just four minutes to turn a two-goal deficit into a 5-4 victory and open the 1960 finals with a win.

France feature once again following an unforgettable semi-final clash against Portugal in 1984, with Les Bleus emerging victorious as they powered towards a first major trophy on home soil.

France had reached the last four in fine fashion with the majestic Michel Platini starring, the midfielder having scored seven times in just three group stage fixtures including back-to-back hat-tricks against Belgium and Yugoslavia.

It was Platini who proved the difference once more, though not before a tense encounter had reached extra-time following a 1-1 draw in 90 minutes, Rui Jordão cancelling out Jean-François Domergue’s first-half opener for the French.

Jordão’s second of the game in extra-time put Portugal ahead and threatened to eliminate the hosts, only for Domergue to net a brace of his own in the 114th-minute with the tie seemingly heading towards a penalty shoot-out.

As the clock ticked towards the final seconds of the additional period it was Platini who broke Portuguese hearts, rifling home Jean Tigana’s cut-back to put the eventual champions into the final.

England hosted the European Championship in 1996 as ‘Football’s coming home’ rang out across the country, with the host nation reaching the semi-finals of the tournament amidst the backing of a raucous home crowd.

On their passage to the last four, Terry Venables’ side produced one of England’s greatest ever tournament performances in the group stage, thrashing a heavily-fancied Netherlands side at Wembley.

England needed a positive result to guarantee qualification against the Oranje in their final group fixture and produced a superb attacking performance, with Alan Shearer and Teddy Sheringham each scoring twice as the Dutch were dismantled.

Holland had been backed amongst the favourites to win the tournament and a had a side comprising of star names including Dennis Bergkamp, Clarence Seedorf and Edwin van der Sar, the latter two having formed part of the Ajax side – alongside the likes of Ronald de Boer and Patrick Kluivert – who had reached back-to-back Champions League finals in the previous two seasons.

England have often struggled to rise to the occasion in major tournaments but inspired by the home crowd overwhelmed their Dutch counterparts, a scintillating showing from the Three Lions who marched on into the knockout stages.

Seven goals, late drama and a captivating comeback, Spain’s stunning 4-3 win against Yugoslavia at Euro 2000 is a fixture that lives long in the memory.

The Spanish needed to win against the group leaders to be assured of their place in the knockout stages, but found themselves facing the real prospect of an ignominious early exit as they trailed heading into stoppage-time.

Slobodan Komljenović’s goal restored Yugoslavia’s advantage for a third time and seemingly had Spain heading for an exit, only for José Antonio Camacho’s side to come back from the brink in enthralling fashion.

Gaizka Mendieta’s 94th-minute penalty prompted a late, late scramble in search of a winner, one that came as Alfonso drilled home his second just a minute later to cap an incredible comeback for Spain who progressed to the quarter-finals.

Yugolsavia – who finished with 10 men after Slavisa Jokanovic was shown a second yellow card – were left devastated at their late collapse, though a goalless draw between Norway and Slovenia meant both sides ultimately reached the knockout stages.

Euro 2004’s ‘Group of Death’ served up a classic as the Netherlands and Czech Republic threw caution to the wind, two of the tournament’s fancied sides facing off in the second round of fixtures.

The Czechs arrived at the tournament labelled as ‘dark horses’ following an almost flawless qualification and opened with a win against Latvia, whilst the Netherlands were in need of a result after drawing their opening fixture with old rivals Germany.

It was the Dutch who got off to a dream start as Wilfred Bouma headed home after just four minutes, before the Oranje doubled their lead as Ruud van Nistelrooy tapped home from Arjen Robben’s cross.

The Netherlands’ comfortable advantage lasted just four minutes however, as Milan Baros seized on a misplaced pass from Phillip Cocu to race through and tee up Jan Koller to reduce the deficit.

Karel Brückner made an early change to his formation for the Czech Republic who continued to push forward at will, their ambition rewarded with a 71st-minute equaliser as Baros lashed home a stunning half-volley from the edge of the penalty area.

John Heitinga’s second yellow card reduced the Dutch to 10 and handed the Czech’s further momentum, with Pavel Nedved pulling the strings in midfield and the forward partnership of Baros and Koller proving problematic.

Read – Euro Classics: The Czechs and Holland serve up an epic attacking encounter in 2004