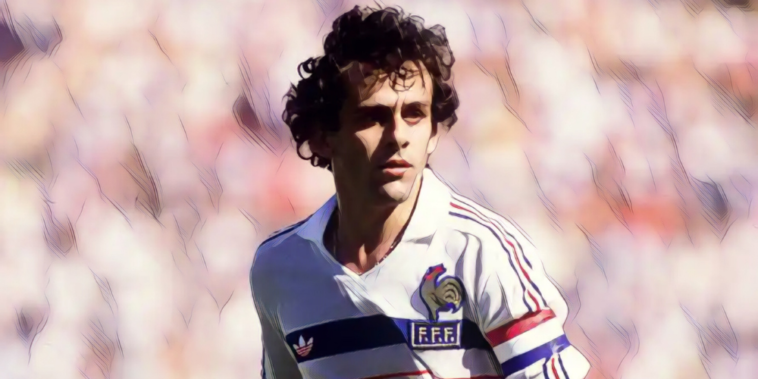 Looking back at Michel ‘Le Roi’ Platini’s iconic performance against Belgium at Euro 1984, the phrase ‘hate the artist, love the art’ has never been so fitting.

There’s an old French proverb that goes, “Petit à petit, l’oiseau fait son nid” – little by little, the bird builds its nest. A simple message, yet one that perfectly encapsulates the incremental rise of the French national team in the late 70’s and early 80’s. At Euro 1984, on home soil, the men with Gallic roosters emblazoned on their chests lit up the tournament, playing with the pomp and swagger of serial champions.

The cock of the walk that summer, the undisputed ‘Roi de France’, was 28-year-old Juventus star Platini.

The French captain, who had just won the Scudetto and Cup Winners’ Cup with The Old Lady, had been in fine fettle that season, scoring an incredible 25 goals from midfield. A man at the zenith of his career, he was both the Capocannoniere (top scorer) in Serie A and the Ballon d’Or holder.

However, global recognition still evaded him. He did not command the same respect as international tournament winners like Pelé, Daniel Passarella or, to a lesser extent, Euro 1980 winner Karl-Heinz Rummenigge.

Euro 1984 offered Platini and his nation a shot at immortality.

Les Bleus hit a purple patch under the stewardship of iconic coach Martin Hidalgo. After failing to qualify for Euro 1980 they kicked on at the World Cup in 1982, but were controversially eliminated at the semi-final stage. Their clash against Rummenigge’s West Germany, the so-called ‘deception of Séville’, is mostly remembered for goalkeeper Harald Schumacher’s flagrant assault on Patrick Battiston. Two years later, that sense of indignation would prove to be a powerful motivator.

At Euro 1984 Hidalgo’s side – drawn in a challenging group – were outright favourites to progress to the knockout stages. A blossoming Danish team, featuring a 19-year-old Michael Laudrup, were expected to join them – at the expense of Euro 1980 runners-up Belgium and a poor Yugoslavian side.

France’s group opener against Denmark at the Parc de Princes was a tight, tepid affair, one that turned on a stomach-churning injury to former Ballon d’Or winner Allan Simonsen. Platini, who was well-marshalled throughout, fortuitously scored the winner 12 minutes from time.

France’s following group match, against noisy neighbours Belgium, had all the hallmarks of an epic. Belgium, led by Guy Thys, shone at Euro 1980 before narrowly losing out to perennial finalists West Germany. History was firmly on The Red Devils’ side. Over an 80-year period they had faced France 64 times, and boasted a superior record of 28 wins to France’s 20.

In reality, Thys’ side were a shadow of the team that had qualified for Euro 1984 in glittering style, due in large part to the ‘Affaire Standard-Waterschei’ – a domestic match-fixing scandal that deprived them of key defenders.

For French detractors, the perceived impotence of Les Bleus’ opposition is a point of contention. There were indeed many notable casualties pre-tournament, with world champions Italy, the Netherlands and England all failing to qualify. It was considered a ‘weak’ edition of the tournament, so much so that British broadcasters deemed it unworthy of comprehensive coverage. From the outset, the tournament and, by association, Platini’s impact have been shrouded in a mystique that has, for some, diluted his nation’s victory.

Has there ever been a more-deserving player of the tournament than Michel Platini at Euro 84?

Platini scored in every game to lead his country to their first-ever major trophy 🏆 pic.twitter.com/VWsyu10kQ9

This analysis is rather reductive. Yes, there were big name absentees, but to say that the standard was poor is to do a disservice to some fine teams. Denmark were an emerging European side who would go on to achieve Euro success in 1992. The Portuguese team that ran France close in the semi-finals were a handful. Despite the raft of bans, Belgium – against whom Platini would produce his defining performance – still boasted seasoned talents including Bayern Munich goalkeeper Jean-Marie Pfaff, captain Jan Ceulemans and burgeoning Anderlecht starlet Enzo Scifo.

This encounter between France and Belgium was indeed a one-sided affair, one slanted by a French performance par excellence, rather than a display of Belgian inadequacy.

As the teams emerged from the tunnel at Nantes’ Stade de la Beaujoire they were greeted to the deafening din of 51,000 predominantly partisan fans. Platini appeared first, with a steely determination in his eyes, leading his team out onto the pristine diamond-cut surface. Against the backdrop of hundreds of oscillating Tricolores, Belgium – with a palpable nervousness – kicked off and almost immediately surrendered possession. Buoyed on by their home advantage, with Platini at his extraordinary best, Les Bleus dominated the opening exchanges.

Just four minutes into the tie, with Thys’ side already surrendering ground, Belgium conceded a free-kick 30 yards from their goal. Against any other team it might have been considered a good ‘tactical’ foul. Against a dead ball specialist like Platini, it was a potentially fatal mistake. So Belgium, fearful, constructed a solid five-man wall.

Platini, the wily operator that he was, forwent the expected shot and instead laid the ball off to Bordeaux defender Battiston. He cracked the bar with a thunderous long-range effort and Platini, the sharpest mind on the pitch, latched on to the rebound and fired a sweet left-footed drive past Pfaff.

As the match developed it became apparent that Belgium could not cope with the dynamic French midfield. Platini may have stolen the plaudits that day, but France’s victory owed so much to Hidalgo’s balanced 3-5-2 system. Le Carré Magique (the magic square), consisting of Bordeaux pair Jean Tigana and Alain Giresse, new boy Luis Fernandez and Platini, was joined by Monaco midfielder Bernard Genghini, who was deputising for the suspended Manuel Amoros.

Belgium were completely overwhelmed. Tigana – who finished second in the 1984 Ballon d’Or – in particular, excelled.

Goals from Giresse and Fernandez before half-time effectively ended the tie and thereafter the match became Platini’s stage. The French captain, a rather unimpressive looking physical specimen, played with a freedom seldom awarded on such a grand occasion.

He sprayed defence-splitting passes with ease, glided past defenders with a swivel of his hips and, surprisingly, revelled in the tackle. Like a peacock proudly parading his plumage, he strut around the Stade de la Beaujoire like a first-rate actor treading the boards. Platini could dictate the pace of a game like no other – and he knew it.

With 15 minutes remaining, Le Roi added his second from the spot. Despite the desperate attempts of Belgian goalkeeper Pfaff (who turned to the dark art of mind games) Platini remained steadfast and sent the Bayern man the wrong way.

The French skipper wasn’t finished there, saving his pièce de résistance for last. With just a minute remaining, after Belgian sweeper Walter De Greef conceded a free kick deep in Belgian territory Platini, with a majestic leap, met Giresse’s pin-point delivery and bulleted a precision header into the corner of the Belgian net. The Red Devils’ humiliation was complete.

The 5-0 triumph over their neighbours sent French expectations soaring and quickly dispelled any reservations about Les Bleus’ cagey showing against the Danes. Platini’s ‘perfect’ hat-trick – left foot, right foot, followed by a header – punctuated one of the finest displays of attacking prowess ever seen.

Three days later, inside 18 minutes in Saint-Étienne, Platini repeated the feat – netting the fastest hat-trick in the history of the competition against whipping boys Yugoslavia. Platini won the Golden Boot award, finishing with an astounding tally of nine goals (another record) and scoring in every match en route to the final.

France’s victory at the tournament meant so much to Hidalgo’s men. It healed the wounds of ‘82, quashing any long-held notions of inferiority that had festered in the heat radiated by their more successful neighbours. The victory sent ripples through European football, initiating a seismic shift in the balance of power. The aesthetically pleasing and ‘pure’ French style – championed by Platini – represented the contemporary way of thinking. The previously dominant, rigid West German philosophy was in need of updating.

In the words of Platini, “A football team represents a way of being – a culture.”

Despite the relative media blackout, Euro 1984 remains a memorable edition of the competition – we have Platini to thank for that. Long before his unscrupulous dealings sullied his name, he thrilled us with his magnum opus against Belgium. An elegant performance that has echoed through history.