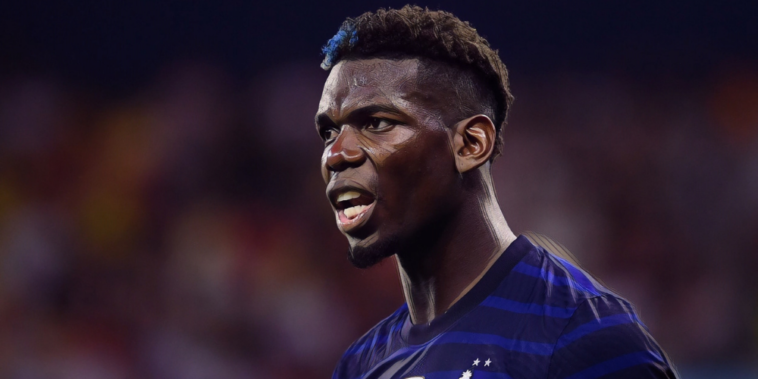 France are out of the European Championship and will be watching the remainder of the tournament at home, the world champions beaten by Switzerland in the biggest shock of Euro 2020 so far.

France will no doubt be disappointed with their early elimination having entered Euro 2020 as favourites and whilst several players performed well below expectations, it is the showings of Paul Pogba that have attracted attention.

Scrutiny of Pogba’s performances is nothing new with the midfielder having become accustomed to the limelight since a world-record move to Manchester United five years ago, but the difference at this summer’s finals is that the 28-year-old has shone.

More than impress, he has been downright excellent.

So much so, that Pogba completed twice as many accurate through balls in France’s three group stage fixtures than he managed in 26 Premier League appearances for Manchester United last season.

The English media have regularly dined out on his poorer performances throughout his second spell with the Red Devils and whilst criticism has been warranted on occasion, is it now time to assess his showings in a different light?

The performances of Pogba in the red of Manchester United have often paled in comparison to those in the blue of France, with his displays at Euro 2020 evidence once again of what the midfielder is capable of when provided with the right setting in which to flourish.

It is impossible to flick on and off performances like the touch of a button, so should we now be asking what United can do for Pogba moving forward, rather than criticise what he has failed to bring to the side in recent seasons?

This is not to say he has been poor at club level as any avid watcher of the Red Devils will testify, but I – like many others in this profession – have subjected the midfielder to criticism given his tendency to underwhelm.

Forget all the tedious talk of hairstyles, dances, an agent who certainly does his media persona no good and the rest, my gripe with Pogba is that he has often made me pull my hair out in frustration.

Frustration that he is not the player he could be.

This is a player who has all the natural ability a player could wish for, a complete skillset, and the ability to transform games with moments of genuine genius, but who has failed to do so consistently.

At Euro 2020 we saw a glimpse of that player, one who shouldered responsibility for France and led his teammates for a wide-ranging list of metrics.

No French player had more touches. None made more ball recoveries. Pogba led for passes attempted, through balls and chances created, whilst he ranked second for penalty area entries and take-ons completed.

His pass for Lucas Hernandez in the build-up to the goal during France’s opening win against Germany was out of this world, as was the perfect weight of ball to free Karim Benzema to score against Portugal.

Even in exit to Switzerland he was exquisite, creating four chances, completing 92% of his passes and scoring one of the goals of the tournament with a bending finish that left Yann Sommer clutching at thin air.

In extra-time he demanded possession and dictated things for the French, sending one half-volleyed pass into the path of Marcus Thuram that drew gasps from the crowd for its level of technique.

It shouldn’t surprise of course that Pogba – a footballer who cost a world-record £89m when signing from Juventus – is capable of influencing top-level football matches at will, but his contrasting performances for club and country must raise concerns amongst the Old Trafford hierarchy.

France’s elimination will see Pogba return to Manchester where a sizeable elephant remains in the room, the midfielder entering the final year of his contract with terms not yet agreed on an extension.

Real Madrid, Paris Saint-Germain and former club Juventus are all likely to come calling in January should a balance between his happiness, role and ambition not be met in the near future.

His time in the Premier League has been punctuated with injuries, mismanagement and a struggle to find the identity he enjoys with France, but now is the time for his club to find the role that truly extracts the most from their most naturally gifted footballer.

One issue, although perhaps a welcome one for Ole Gunnar Solskjaer in terms of talent, is the presence of Bruno Fernandes in a role largely void of defensive responsibility.

Fernandes has been a phenomenon since arriving from Sporting Lisbon with his pure numbers in terms of production making him irreplaceable at the heart of the side.

Pogba too has performed better when the shackles are released, but the lack of an elite ball-winning midfielder in United’s side has made it a challenge to incorporate both players centrally whilst maintaining midfield equilibrium.

"I think if he played next to Roy, he'd be a different player. He needs somebody behind his back, putting him under pressure, being really demanding of him… it's frustrating because he can give much more than what he's giving to the team."@OfficialVieira discusses Paul Pogba pic.twitter.com/Xkd2j9utgx

Neither Scott McTominay or Fred have shown they are the player to fulfil this role, whilst Nemanja Matic’s best days are most certainly behind him.

Pogba has the benefit of playing next to the incredible N’Golo Kante at international level, with the Chelsea midfielder renown for his ability to often operate as an all-action one-man midfield.

Kante may be a unique talent, but finding a holding midfielder with at least stylistically similar attributes would go a long way to extracting the best from Pogba and turning Manchester United into genuine contenders for the title.

Euro 2020 has proven the Red Devils must do all they can to unearth the best version of Paul Pogba on a permanent basis.