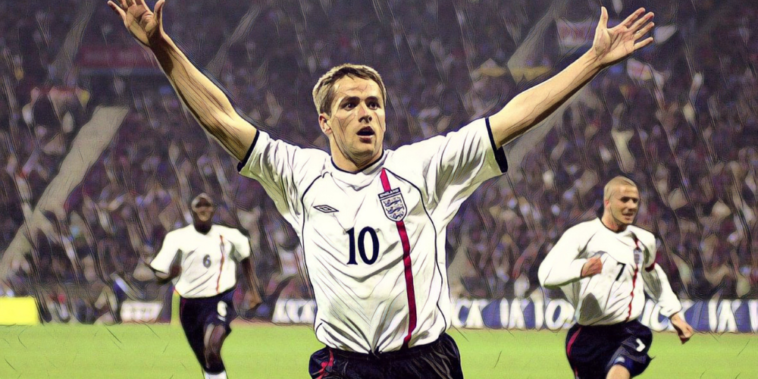 The term ‘Golden Generation’ has been banded around international football more times than we care to count, the collective reference for a group of footballers who come through at once and threaten to deliver success for their nation.

Not every Golden Generation delivers however, the Portuguese side of the mid-to-late-nineties never quite managed to succeed in a major tournament, whilst Belgium’s current contingent have yet to win a maiden major trophy despite much hope and hype.

For fans of England, there are many who still scratch their heads at just how the teams of the mid-2000s never quite fulfilled expectations. In truth, a side comprised of some of the best players of their respective generations never really got close.

Combinations of misfortune and mismanagement certainly hindered their hopes, but largely their failure came as a result of falling below expectations – all but for one September night in 2001.

England entered the new millennium in a state of disarray following a disastrous Euro 2000 campaign in which a talented side crashed out in the group stage, a catastrophic late defeat to Romania ending their campaign before it had got up and running.

Paired with old rivals Germany in qualification for the World Cup two years later, an opening home defeat to Die Mannschaft – the last ever fixture played at the old Wembley – saw Kevin Keegan resign as manager, the likeable patriotism of the former Newcastle coach not quite enough to deliver results.

A lack of credible alternatives saw England step into uncharted territory, naming Lazio manager Sven-Göran Eriksson as Keegan’s replacement despite the xenophobic wrath incurred by some sections of the lower level press.

In appointing the Swede, the FA had perhaps hoped for a tactical tweak from the 4-4-2 system that had dominated English football in the previous decades, but Eriksson – for the most part – stuck with the Three Lions’ traditions and utilised a club-level partnership as Emile Heskey partnered Liverpool teammate Michael Owen in attack.

England had stumbled to a goalless draw in Finland during their second qualifier, but the arrival of Eriksson helped turn their fortunes around, his first fixture a 3-0 friendly win over Spain before three consecutive qualification victories over Finland, Albania and Greece.

With all due respect, a tougher test awaited and England travelled to Munich in September in need of a result, the Three Lions six points adrift of the group leaders with a game in hand.

Victory would hand Eriksson’s side a realistic chance of topping the group and automatic qualification – anything less and it was play-offs at best.

Germany had previously been beaten just once in a World Cup qualifier on home soil and their evening could hardly have began in better fashion at the Olympiastadion, Carsten Jancker reacting first to Oliver Neuville’s knockdown to prod beyond David Seaman for a sixth-minute lead.

Fortunately for Eriksson he had a collection of emerging world-class talents amongst his ranks, with Owen arguably the most exciting of them all.

Owen had burst onto the scene as a teenager before assuming the role as England’s talisman following the international retirement of Alan Shearer, whilst the 21-year-old was coming off the best season of his career after firing Liverpool to a cup treble.

Owen and Heskey had combined for 46 goals as Liverpool won the UEFA Cup, FA Cup and League Cup during the 2000/01 season and Eriksson was keen to harness the most from a flourishing partnership, the selfless style of the latter perfectly complimenting the more tunnel-visioned Owen.

Within six minutes, the visitors were level.

David Beckham’s free-kick was only half-cleared by the German defence, with Gary Neville heading the ball back into the danger zone. Nick Barmby had timed his run to perfection to arrive ahead of Oliver Kahn, nodding the ball into the path of Owen who made no mistake to level the scores.

England grew in confidence and took the lead on the stroke of half-time as Steven Gerrard lashed home his first goal for the national side, a chest down and thump that gathered pace as it arrowed into the corner and became typical of the Liverpool midfielder throughout his career.

If England had edged the first half in Munich, the second was a one-sided contest that resulted in the Three Lions’ most spectacular showing this century.

Ruthless and smooth in transition, it was a clinic in counter-attacking football from England.

It took just three minutes for Owen to double England’s advantage in the second half, Heskey rising to meet Beckham’s in-swinging delivery, with the ball cushioned into his partner’s path who rifled the ball beyond the wrong-footed Kahn.

Germany poured forward in search of an avenue back into the contest, though their desperation only played perfectly into the hands of Owen – Gerrard sliding his club teammate through for a third to score the most iconic English hat-trick since Geoff Hurst.

Germany were stunned, but England even more so, though there was still time for another crowning moment. Heskey got himself in on the act, powering through onto Paul Scholes’ pass to roll home a fifth and send the visitors into dreamland – Deutschland 1, England 5.

Owen’s career in its infancy had appeared to have unlimited potential, his masterclass in Munich arguably the defining night of an England career, an evening where everything came together for the nation’s collective crop of talent.

“I played three or four games in my career when absolutely everything clicked, everyone had confidence and every chance we got we scored… That game was one of those freaks when everything we touched turned to gold.”

Perhaps this was the night when England’s budding team were christened with the Golden Generation tag, one that weighed heavily as the Three Lions failed to go beyond the quarter-finals in three consecutive major tournaments under Eriksson.

For Owen however, this was the golden night in a career that time has perhaps not been kind to, the injury problems that haunted his latter years often overriding the captivating clinicality that defined his emergence.

On that night in Munich, Owen was unstoppable and three months after this performance he was named as winner of the Ballon d’Or. He remains the second youngest recipient of the game’s greatest individual honour and one of just four Englishman to have won the accolade.

As the clock ticked down towards the full-time whistle, the Olympiastadion emptied as shell-shocked German supporters flooded out of the ground in their droves.

The travelling contingent remained til the very end, soaking in a seismic shock of which has not been repeated in the two decades since.

England fans are famed for endless and often unjustified optimism when following the national side, but Owen’s unforgettable performance in Munich was a night where those who dare to dream finally saw them fulfilled.