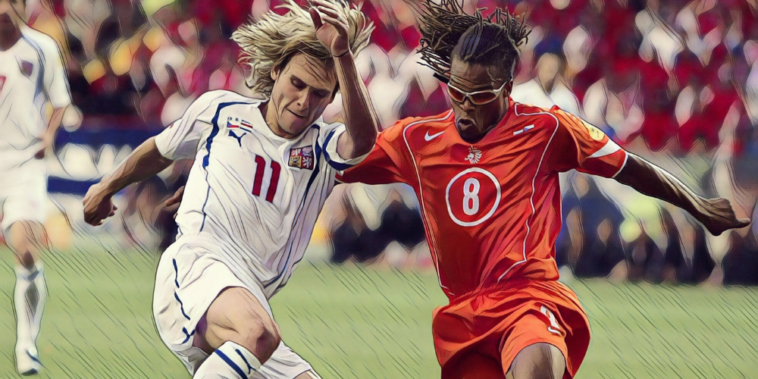 The Netherlands and Czech Republic meet in the knockout stages of Euro 2020 this evening, with both sides hoping to replicate memorable performances from previous European Championships.

Tonight’s meeting in Budapest will see the two nations compete for a place in the quarter-finals and evokes back nostalgia from an all-time classic European Championship encounter between the teams from 2004, a thrilling group stage clash that saw two attacking sides go all out for three points.

Euro 2004 pitted the Netherlands and Czech Republic together in a difficult looking group that also contained World Cup finalists Germany, with debutants Latvia given little chance against three sides with pre-tournament hopes of reaching the latter stages.

There was also recent history, a late Frank de Boer penalty having seen the Dutch edge a 1-0 win in the group stages of Euro 2000, whilst the Oranje were the only side to take a point off the Czechs during qualification for the 2004 finals.

Victory for the Czech Republic at The Estádio Municipal de Aveiro would guarantee qualification following an opening win against Latvia, whilst the Netherlands were in need of a result after drawing with old rivals Germany in their opening fixture.

Germany’s dropping of points to the lowly Latvians earlier in the day perhaps relieved some of the pressure and what followed was an absolute humdinger of a clash between two sides who threw caution to the wind, with Dick Advocaat’s Netherlands side surviving some early Czech pressure to race into a two-goal lead.

The Czech Republic’s marking left plenty to be desired as the Dutch opened the scoring after just four minutes, Arjen Robben’s in-swinging free-kick met by the head of Wilfred Bouma, who somehow ghosted in at the far post unnoticed despite the illuminous orange glow of the Netherlands’ national colours.

Karel Brückner’s free-scoring Czech side are often looked back at fondly as the most exciting side of Euro 2004, but when revisiting the opening exchanges of their classic clash with the Dutch, it becomes clear that there were defensive deficiencies that prevented a good side from becoming great.

The Netherlands began to take charge with Clarence Seedorf twice trying his luck from range, before the pressure told as Arjen Robben crossed for the unmarked Ruud van Nistlerooy – meandering his way back onside in classic Van Nistelrooy fashion – to tap home an opportunity he was never going to miss.

Two goals ahead with less than a quarter of the game played, you could have been forgiven for thinking the Dutch were in cruise control, but this was no ordinary Czech side and just four minutes later their mountainous task was halved.

Brückner often started his side in a 4-4-2 system with the contrasting talents of Milan Baros and Jan Koller proving problematic for opposition defences, with the duo combining to bring the Czechs back into the contest.

Phillip Cocu’s misplaced pass was seized upon by the effervescent Baros who scampered off at full tilt towards the Dutch defence, skipping beyond the challenge of Jaap Stam before teeing-up Koller to slam home.

The goal may have eased Czech concerns, but Brückner was far from happy with his side’s showing and acted boldy and bravely to change the game’s dynamic, substituting Ajax defender Zdeněk Grygera for Vladimir Smicer after just 25 minutes and switching to a 3-5-2 system.

The Czech Republic’s expansive approach saw both teams exchange opportunities as Johnny Heitinga and Seedorf came close from distance for the Dutch, whilst the trailing Czechs sought greater influence from Pavel Nedved with the Juventus midfielder the jewel in their exciting side.

Nedved was mesmeric as he glided between lines, linking with Karel Poborsky with both players testing Edwin van der Sar in the opening exchanges of the second half.

Behind, still, after an hour of play, the gung-ho game-plan of Brückner took a new twist as Marek Heinz – scorer of the late winner against Latvia – was introduced for Tomáš Galásek, leaving the Czech team with minimalist defensive balance as a third forward was thrust into action.

Brückner’s bravery was rewarded after 71 minutes and in sublime fashion, the Koller-Baros combination again working to devastating effect as the hulking frame of the former cushioned the ball into the path of his teammate, who left Van der Sar with no chance as he rifled a half-volley home to level the scores.

Back from the brink and in a strong position to qualify with a point, less adventurous managers would have settled and tightened up a side.

Brückner had other ideas.

Holland were reduced to 10 men as Heitinga was sent off for a second yellow card, both awarded for fouls on the captivating Nedved who grew in influence throughout.

The Ballon d’Or holder forced Van der Sar into a smart save from a free-kick from distance, before coming agonisingly close to scoring a stunning effort from range as a spectacular drive crashed off the woodwork with the goalkeeper beaten.

Imploring his side to continue to push forward with attacking verve and vibrance, Brückner’s attacking principles secured a stunning comeback win – and qualification to the knockout stages – with just two minutes remaining in Aveiro.

Baros – excellent throughout Euro 2004 as he claimed the tournament’s Golden Boot – was again at the heart of it, running forward menacingly in possession before teeing up Heinz, whose fierce low drive was palmed away by Van der Sar.

Poborsky reacted quickest to the rebound, showing both selflessness and awareness to square instead of shoot, allowing Smicer to tap home a dramatic late winner and seal the Czech’s progress.

The Dutch were left devastated at their capitulation to the Czechs, whose adventurous and ambitious attacking ensured one of the most memorable European Championship encounters in modern memory.

Both sides ultimately progressed before falling at the semi-finals, as the Netherlands were beaten by host nation Portugal and the Czech Republic blunted by the stoic defensive rearguard of rank underdogs and eventual shock champions Greece.

Greece’s stunning success may have been a triumph for the outsiders if not one for the footballing purists, but the Dutch’s dramatic date with the Czechs was the game at is unadulterated best as both teams brought endless energy and attacking endeavour.

Entertaining and enthralling throughout however, the courageous Czechs won plenty of admirers and here’s hoping the current contingent  – and their Dutch counterparts – can evoke some of the spirit of 2004 when rivalries are resumed this evening.