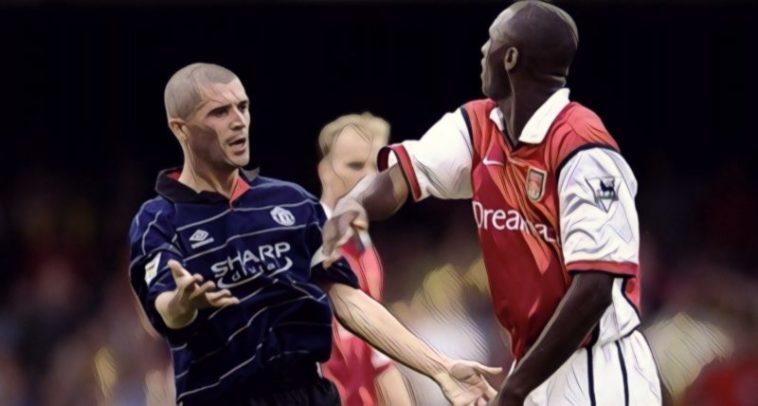 The Premier League has witnessed some legendary captains throughout its history, players whose responsibility is to lead their teammates and extract the most from those around them.

English football’s ever changing landscape has seen the role of a teams skipper change somewhat in recent times, with fans and pundits often heard reminiscing over the ‘captain fantastics’ from yesteryear.

Is the relentless desire to win diminished in young players given too much too soon? Or do they simply not make them like this anymore?

We’ve decided to look back at some of the most iconic leaders the league has seen, a salute to the old-fashioned blood, sweat and tears captains that you would certainly want with you in the trenches.

Here are five of the greatest ‘leaders’ in Premier League history:

The only player in history to captain a title-winning side in three different decades, Adams broke through at Arsenal as a teenager in the eighties before being made club captain at the tender age of just 21.

The following year saw Adams captain the side to a top-flight league title, before making it two championship successes in three seasons in 1991 during a hugely successful period pre-Premier League.

Adams battled well-documented personal problems including alcoholism and a jail sentence before heading into the newly formed division regarded as one of the finest leaders in the English game, captaining the Gunners to a host of cup successes including becoming the first side in history to complete a domestic cup double in 1993.

Arsene Wenger’s arrival in north London helped transform the centre-back into a model professional and further added to his legacy, leading the side to domestic doubles in both 1998 and 2002 before his retirement following that latter success.

Adams retired as the most successful captain in Arsenal’s history having captained the side to ten major honours, the club recognising his achievements with a statue of the defender outside their Emirates Stadium home.

One of the club’s all-time greats, Adams brought a leadership often lacking at Arsenal in recent years.

Arguably the most iconic leader in Premier League history, Keane was the driving force behind a Manchester United side that dominated under the guidance of Sir Alex Ferguson.

The Irishman arrived at United from Nottingham Forest in a British transfer-record deal in 1993 and proved to be one of Ferguson’s greatest ever signings, acting as the Scot’s on-field voice and demanding nothing but the highest standards from his teammates.

His combative style and sheer will-to-win struck fear into both opposition and teammates alike, a snarling midfield presence who put everything into bringing success to Old Trafford in a golden era for the Manchester side.

Keane won 12 major honours in over a decade at the club, captaining the side to four of his seven Premier League titles and during United’s famed treble-winning season of 1999 – the Red Devils crowned champions of Europe for the first time in 31 years.

The Cork-native’s tussles with Arsenal counterpart Patrick Vieira are amongst the most legendary scenes of the Premier League era, his full blooded commitment inspirational to those around him.

Perhaps his finest hour came against Juventus in the semi-finals of United’s 1999 Champions League triumph, when – on a booking that meant he would miss the final – Keane drove his side forward to overturn a two-goal deficit and secure victory in Turin.

The banner commemorating former Chelsea captain John Terry still hangs proudly at Stamford Bridge, the defender who rose from within the club’s academy ranks to become the greatest leader in the west London side’s history.

Terry remained a vital member of the Chelsea side following Roman Abramovich’s transformative takeover of the club, being named as the PFA Player of the Year during his first season wearing the armband as the Blues ended a 50-year wait for a league title under Jose Mourinho.

Back-to-back championships followed as a new dawn was ushered in for the capital club, Terry the inspirational captain at the heart of a side who became a dominant force in English football.

Terry made 717 appearances in all competitions for Chelsea and captained the side to five league titles and the Champions League amongst 14 major honours, often putting his body on the line for a club where he is regarded amongst the greatest players to have adorned the blue shirt.

Stepping into the aforementioned Adams’ shoes in north London was a modern day midfielder who seemed to have it all, the Arsenal man mountain that was Patrick Vieira.

The World Cup-winning star had flourished into one of the Premier League’s very best players under the stewardship of Arsene Wenger, winning back-to-back domestic doubles before inheriting the captain’s armband following Adams’ 2002 retirement.

The transition to Vieira seemed like a changing of the guard from a previous era into arguably the finest side of Wenger’s dynasty, the famed ‘Invincibles’ team led by their colossus in the centre of the park who was a huge figure in both stature and status.

Vieira’s competitive edge often spilled over and his disciplinary record was a concern, though he was undoubtedly the beating heart of a superb Arsenal side, bringing the tenacity and fight to an elite footballing side.

Never one to shirk a challenge, the Frenchman lifted both the Premier League and FA Cup as Gunners’ captain, the general and leader behind only the second team in English football history to complete an unbeaten season.

The past decade of the Premier League undoubtedly belonged to Manchester City, the once ‘noisy neighbours’ rising to the summit of English football on the back of their billionaire investment.

Stellar names such as David Silva and Sergio Aguero have played influential roles in a side that has won four league titles in the past eight seasons, but it is captain Kompany who has provided the leadership and guidance in a trophy-laden era at the Etihad.

The Belgian international signed just prior to Sheik Mansour’s takeover of the club and flourished into once of the division’s finest centre-backs, named as club captain in 2011 and skippering the side to ten major honours before his departure in 2019.

Much more than a fine defender and leader, however, Kompany embraced the culture of the club and was largely responsible for their shift from historical mediocrity to challengers for the game’s biggest prizes.

Vital winning goals during title run-ins in 2012 and 2019 are amongst the most iconic in City’s history, Kompany ending the club’s 35-year wait for silverware before becoming their most successful ever captain, leaving for Anderlecht last summer on the back of an unprecedented domestic treble.