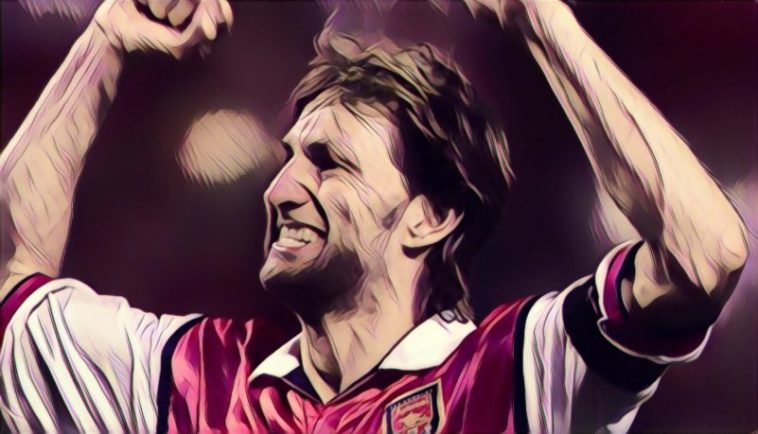 Tony Adams is one of Arsenal’s greatest ever players. He captained the Gunners for the majority of his 19 seasons at the club and was the type of inspirational leader that modern day Arsenal teams have so obviously lacked.

In total Adams made 674 appearances for the Gunners, winning four league titles and three FA Cups. Here are some of the best quotes by those who worked with or competed against him …

“I first saw him aged 16 and I don’t think I have ever seen a player of that age bossing a game in that way. It stayed with me for a long time.Tony was such an influence that he as good as ran every dressing-room he played in, for England and Arsenal.” Harry Redknapp

“I think Tony Adams was a United player in an Arsenal shirt to be honest with you. I thought he would have been absolutely perfect for United. I tried a little bit [to sign him] when he was 19 and in the reserves but there was no chance. Those two are great examples of how far you can go in the game when you’ve got an inner determination and desire to be successful.” Sir Alex Ferguson.

“A born leader. He learnt from his problems and has been an amazing role model since. You could argue that he’s the greatest Arsenal player of all time because of his leadership qualities and he could play more than people give him credit for – especially after Arsene arrived and he started to play the ball out.” Bob Wilson.

“He was just brilliant. He was a great man-motivator, knew when to get on your back, but knew when to do it, when you needed a little shove. Just a great captain and it was great having him in front of me.” David Seaman.

“Colossus. Proper centre half. Men-of-men. In our England team we were all men, we were all big characters and big men but he was men-of-men. He was a leader and he inspired people around him. People say he wasn’t the best passer but he wasn’t that bad. His volley against Everton showed he could play. He wasn’t the quickest but his timing of tackling. He was a brilliant organiser, he’s top draw.” Paul Ince.

“Captain. A great defender and a great leader. He was so inspirational and was able to get the best out of those around him. Great in the air and not bad on the floor as well; with him around the defence would definitely be organised.” Ian Wright.

“We had some great battles over the years, he came off with cuts on his head and I did too, but the good thing about it was we both shook hands at the end of the game. I respected him and realised what a tough and top defender he was.” Alan Shearer.

“Tony Adams was the captain of the best England team I’ve ever seen – Terry Venables’ Euro 96 side – as well as four Arsenal title-winning teams, bestriding the eras of George Graham and Arsene Wenger. Adams was the best purely defensive defender England have ever produced – an absolute rock for the Gunners and the only player to captain a title-winning team across three different decades. If a young Tony Adams were to come on the scene now, any club in the Premier League would be happy to pay tens of millions for him.” Jimmy Greaves.

“I think Tony’s technique was excellent and he was actually quicker than a lot of people realised, especially over longer distances. That made him excellent in one-on-one situations. Tony always wanted to win and drag everybody over the line with him.” Martin Keown.

“A professor of defence.” Arsene Wenger.

Read: Ranking every Arsenal captain in the Premier League era