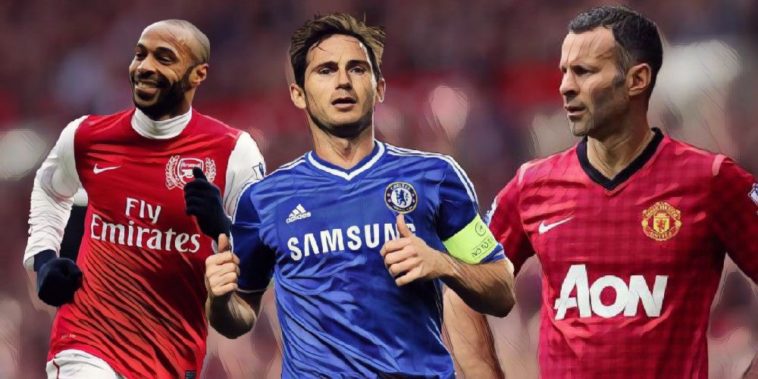 The Premier League’s ‘100 club’ is one in which only the division’s elite gain exclusive membership, with only 28 players in Premier League history having scoring a century of top flight goals.

Rarer still, is a list of players capable of both scoring and creating prolifically, with this list celebrating the players to have had a hand in more goals than any of their counterparts.

Only 14 players have managed to score 100+ Premier League goals alongside providing 50+ assists, and we’ve decided to rank them for you by number of goal contributions:

The Chelsea legend developed a reputation as the man for the big occasion during a glittering career in west London, winning several major honours including four Premier League titles and the Champions League in addition to boasting a fine goalscoring record in finals.

The Ivorian twice won the division’s Golden Boot during a Chelsea career that saw him score 164 times in all competitions across two spells, including 104 in league action to join the Premier League’s ‘100 club’.

Far from just a prolific goalscorer, however, the two-time African Footballer of the Year often led the forward line on his own and created several opportunities for his teammates, providing 54 assists during his nine seasons in England’s top tier.

Only Ryan Giggs can better Paul Scholes’ tally of 11 Premier League titles, the midfielder at the centre of a dominant era for Manchester United under Sir Alex Ferguson.

Few midfield talents have possessed the technique, intelligence or passing range of the Oldham-born star, Scholes evolving from goalscoring midfielder into deep-lying playmaker as he reached the twilight of his career.

Regarded by many as the finest midfielder the league has seen, Scholes spent his entire career with the club and made 499 Premier League appearances, scoring 107 goals and providing a further 55 assists.

The career of Emile Heskey is one perhaps difficult to assess, a forward often much maligned but a player whose list of achievements includes six major honours, 62 caps for England and a club record move to Liverpool.

Heskey was never a prolific goalscorer, but his muscular presence in leading the forward line made him an ideal strike partner – never more notably than a fine period working in tandem with Michael Owen for club and country.

Only six players have ever made more Premier League appearances than the forward, Heskey scoring 110 goals and providing 53 assists over spells at clubs including Leicester, Aston Villa and Birmingham.

The greatest player in Southampton’s history and one of the Premier League’s most popular figures, Le Tissier is a player who captured the imagination with his effortless ability to produce moments of magic.

Perhaps a player whose full talents were not quite as appreciated as they should have been outside of the South Coast, a succession of England managers overlooking a player capable of incredible ingenuity.

100 Premier League goals, 64 assists and countless memories for Saints’ fans, Le Tissier’s Southampton legacy is assured following his loyalty to a club he helped save from relegation on many an occasion.

One of the division’s true mavericks –  sit back, relax and enjoy a sprinkling of Le Tissier stardust in the below video.

No player in Premier League history has ever scored more headed goals than the towering target man, Crouch a popular focal point during a memorable career spanning two decades and including spells at eight top-flight clubs.

Career highlights include winning the FA Cup with Liverpool and scoring the goal that sealed Tottenham’s first ever qualification for the Champions League, in addition to scoring 22 goals in 42 caps for England at international level.

Scorer of 108 Premier League goals, Crouch’s role in leading the line also led to 58 assists for his teammates, whilst he also holds the all-time record for being the most used substitute in the division’s history.

One of just three players to have won the Premier League’s Golden Boot at two different clubs, former Leeds and Chelsea forward Hasselbaink developed a reputation as one of the league’s most prolific goalscorers either side of the millennium.

The Netherlands international first finished as the division’s leading goalscorer during a two-year spell at Elland Road, before joining Chelsea in a club record deal via a single season stay at Atletico Madrid.

Hasselbaink played the best football of his career with the west London side, scoring 69 league goals over four seasons and winning a second Golden Boot award before later spells at Middlesbrough and Charlton.

Few players have hit thunderbastards quite like the powerfully built Dutchman, though the forward also showed his ability to create with 58 assists in addition to his 127 Premier League goals.

One of the Premier League’s greatest midfielders and a player who carried a mediocre Liverpool’s hopes for much of his career, Gerrard provided more than 200 goal contributions during a 17-year spell in the first-team at Anfield.

The former England captain lifted the Champions League and FA cup amongst his honours but his loyalty to his boyhood club cost him the chance to win further silverware, though there can be no denying his status amongst the Premier League’s all-time greats despite his lack of a winner’s medal.

Name as PFA Players’ Player and Football Writer’s Footballer of the Year, his eight inclusions in the PFA Team of the Year is a divisional record.

Winner of the division’s Golden Boot during the Premier League’s inaugural season, Sheringham cemented his position as a club legend at Tottenham before leaving for Manchester United in search of silverware.

The veteran’s decision proved an inspired choice as he helped Sir Alex Ferguson’s side to a Premier League, FA Cup and Champions League treble in 1999, scoring in the final of the latter against Bayern Munich.

That league success was part of three successive Premier League titles, Sheringham winning a PFA Player of the Year and FWA Footballer of the Year double in 2001 before returning to Spurs.

His quality and professionalism saw the forward play past his 40th birthday following spells at Portsmouth and West Ham, setting the all-time records for oldest outfield player and oldest Premier League goalscorer alongside providing 222 goal contributions.

Arguably the greatest player the Premier League has ever seen, Henry’s four Golden Boot awards remains a divisional record whilst he is one of just two players – alongside Alan Shearer – to win the accolade in three consecutive seasons.

No player has ever won the PFA Player of the Year or FWA Footballer of the Year on more occasions than Henry, who reigned as the league’s finest forward during a sensational eight-year spell at Arsenal.

The Frenchman eclipsed Ian Wright as the Gunners’ greatest ever goalscorer before departing for Barcelona, but he was more than just a source of goals, providing a constant flow of assists.

Henry’s 2002/03 season is perhaps one of the most underrated individual campaigns the league has seen, the forward scoring 24 times and providing 20 assists – the latter a record in a single season.

That tally was part of 249 goal contributions during his time in English football, the sixth-highest of any Premier League player.

Cole, for one reason or another, is a player not quite celebrated in the same esteem as others on this list, despite a career of achievements that rank him alongside the very best the division has seen.

Perhaps Glenn Hoddle’s suggestion that Cole needed five chances to score one goal remained in the subconscious, but Cole was prolific goalscorer in an era of sublimely talented English forwards.

His record of 187 Premier League goals is third only to Alan Shearer and Wayne Rooney, a record all the more remarkable give his tally was boosted by just one penalty scored – Cole’s goal-per-game ratio from open play better than even the legendary Shearer.

Cole’s finest individual Premier League season was perhaps his first, topping the scoring charts at Newcastle with a record 34 goals in addition to providing a league leading 13 assists, evidence of his all-round game.

Cole finished his career with five Premier League titles at Manchester United and 260 goal contributions, not bad for a player rarely brought up in discussions of the divisions best.

Another of United’s famed academy graduates, Giggs would emerge as a teenage sensation, possessing electric pace and a seemingly nonchalant ability to ghost past opposition full-backs at will.

As his career progressed, he would evolve from a flying winger into a more central role, his of honours including a barely believable 13 league titles, in addition to four FA Cups, three League Cups and two Champions League titles.

No player in history has ever made more than his 963 appearances in a United shirt, his longevity and quality leaving him with 109 Premier League goals and 162 assists, the most assists in the competition’s history.

Incredibly the fifth-highest scoring player in Premier League history, Lampard’s goalscoring exploits from a central midfield position are unlikely to ever be matched.

The former England international scored prolifically during Chelsea’s successes in the Premier League era, netting double figures for league goals in ten consecutive seasons between 2004 and 2013, including a career-best 22 league goals as the Blues secured a domestic double in 2010 under Carlo Ancelotti.

One of just three players to have registered 100+ Premier League goals and assists, Lampard would become the greatest goalscorer in Chelsea’s history during a career that would deliver three league titles and saw him finish as the division’s leading assist provider on three occasions.

The second highest goalscorer in the history of the Premier League, Wayne Rooney burst onto the scene as a teenager before establishing himself as a star of the division.

One of only two players to have scored over 200 Premier League goals, Rooney was the complete centre-forward capable of the simple and spectacular in both scoring and creating.

Having emerged at boyhood club Everton he was signed by Manchester United in 2004, becoming the most expensive teenager in football history before a glittering period of success.

In 13 seasons at the club he would win five league titles and the Champions League amongst a host of major honours, becoming the club’s all-time record goalscorer and joining Giggs and Lampard in becoming just the third player to reach a century of both Premier League goals and assists.

Rooney later returned to Everton before departing for MLS, the former England captain having registered 311 goal involvements throughout his career.

Shearer fired a record 260 goals in the Premier League and is the only player in the division’s history to hit 30+ goals in more than one season, achieving the feat in three consecutive campaigns for Blackburn between 1994 and 1996.

Shearer lifted the title during that prolific period at Ewood Park before joining boyhood club Newcastle in a world-record deal, scoring 206 times on Tyneside to become the club’s all-time record goalscorer.

A player capable of scoring all types of goals, Shearer was twice named as the PFA Player’s Player of the Year and won the Premier League’s Golden Boot in three successive seasons during the mid-nineties.

Recognised as the greatest goalscorer the league has seen, Shearer also provided 64 assists to take his tally to a Premier League record of 324 goal contributions.