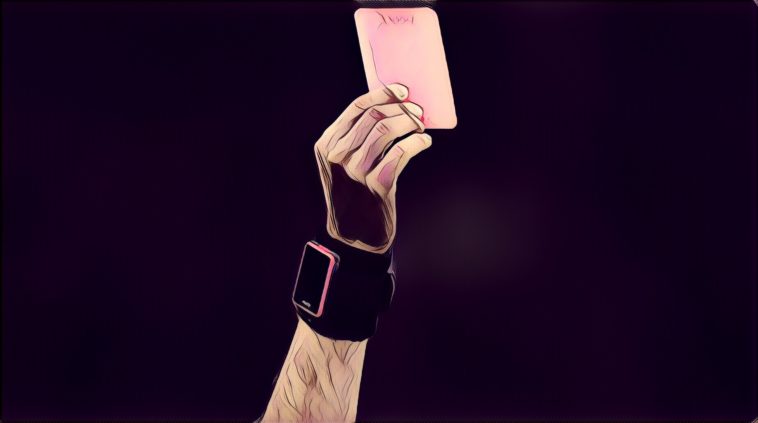 Red cards are a necessary part of the game to curb rash tackles and cheating, but there have been some really odd sendings off over the years.

Football writer Pablo Maurer recently introduced us all to possibly the weirdest red card you could possibly see: snapping an opponent with a towel.

Diego Chara just got a red card for flicking a dude in the ear. He joins Ramiro "Towel Snap" Corralles in the all-time MLS ridiculous red card hall of fame. pic.twitter.com/4Aaj0iFwlh

As strange as that sending off was, there are a lot of examples that match it. This list is by no means exhaustive; there are too many bizarre red card moments to put in one post.

But we’ve tried to gather the most outlandish reasons for a player receiving their marching orders that we could find and bring them to you.

Jocking (and getting jocked)

During a game between Greece and Bosnia & Herzegovina in 2016, former Man City striker Edin Dzeko got into a tangle with Sokratis Papadopoulos. As one does, Dzeko grabbed the leg of the Greek defender before pulling down his shorts. That earned the Bosnian a second yellow card, while Sokratis received a red card for his bizarre hysterics.

During an FA Cup clash with Arsenal in 2002, Dennis Bergkamp was sent off for a wretched tackle, the second Gunner to receive his marching orders that day. While waiting for the matter to be resolved, an Arsenal fan threw a coin at Jamie Carragher, who flung it back in the direction from whence it came. He was merely just returning the money to its rightful owner, I’m sure.

Mike Reilly sent the Liverpool centre-back off for the incident, much to the scouser’s shock.

With time running out on League Cup semi-final between Swansea and Chelsea, Eden Hazard lost his patience with a ball boy who fell on the match ball instead of returning it to the field of play. The Belgian then attempted to kick the ball from underneath the ball boy but kicked him in the process.

It turned out the recipient of Hazard’s boot was more of a ‘ball man’, as the person in question was 17-year-old Charlie Morgan, who was a bit on the old side to be returning balls to the pitch. Isn’t that left to eight-year-olds? In any case, the Blues attacker was dismissed by referee Chris Hoy for the incident, even if Morgan made a meal of the whole thing.

Crazy 24 hours. Spoke to Hazard and I will not be pressing charges. Be in touch

Putting on a mask

After scoring a superb solo effort for Santos in the early days of his career, Neymar put on a mask to celebrate this pretty great goal. The referee decided he was an officer of the fun police and showed the Brazilian a red card for doing so. I guess that official isn’t a fan of Facundo Sava, Marco Reus or Pierre-Emerick Aubameyang either.

Putting your head through a window

This might be one of my favourite things of all time, never mind football celebrations or sendings off. It happened during a Sunday league game in Italy, after a player scored a fortuitous goal off the back of a goalkeeping error. So excited was he that he put his head through the window of a subs bench.