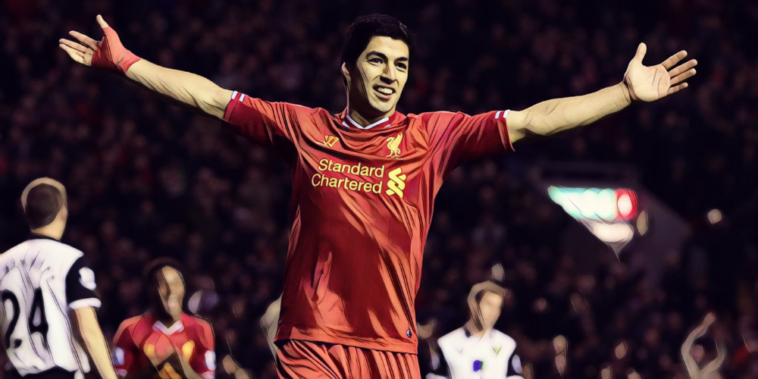 Barcelona’s signing of Luis Suarez from Liverpool saw the Premier League lose one of its star attractions in the summer of 2014, but as hearts were broken on Merseyside there were probably corks popping in celebration further south.

Norwich City were sick of the sight of Suarez. Sick to the pit of their stomachs. Rarely has one player enjoyed such a fine record against a particular opponent, the Canaries regularly on the receiving end of the forward’s finest displays.

Suarez scored an astonishing 12 goals in just six league appearances against Norwich, with a further three assists thrown in for good measure.

He became the first player in Premier League history to score three hat-tricks against the same opponent, the finest of which came on a December evening in 2013.

Suarez had signed for Liverpool from Ajax on what became one of the most notorious deadline days the division has seen, the winter window arrival signed to partner Fernando Torres, only to end up replacing the Spaniard following his defection to Chelsea.

Whilst fellow new recruit Andy Carroll failed to live up to expectations, Suarez netted on his debut and over the next two seasons grew in influence and importance to the Reds.

His first full season delivered a respectable 17 goals in all competitions, before exploding the following year in a phenomenal 2012/13, scoring 30 goals to be shortlisted for the PFA Player of the Year.

Suarez’s season ended in controversy however, a biting incident involving Chelsea defender Branislav Ivanovic curtailing his campaign and seeing the star banned for the opening five games of the 2013/14 season.

Liverpool began brightly even given the suspension of their leading light, though Brendan Rodgers’ side would reach new heights following the return of Suarez to the side.

Suarez scored twice in a win at Sunderland on his return before netting against Crystal Palace, a hat-trick against West Brom taking his total to six goals in just four appearances as Liverpool moved into early title contention.

Rodgers’ side dropped to fourth after a disappointing defeat at Hull on December 1, with the Reds in a position where they could ill-afford another slip as Norwich arrived on Merseyside three days later.

What followed was an extraordinary performance from the club’s South American superstar, Suarez producing a virtuoso display as Liverpool thrashed the Canaries 5-1 at Anfield.

Suarez’s first of the evening came in spectacular fashion as he spotted John Ruddy off his line, launching a dipping volley from all of 40 yards which rendered the goalkeeper’s despairing dive redundant.

It was instinctive and audacious, the type of effort few of his peers would contemplate, let alone execute.

Just a year earlier Suarez had netted a deft lob from just inside the Norwich half on his way to scoring a second successive treble at Carrow Road. The visiting Canaries can hardly say they hadn’t been warned.

Liverpool were rampant against a Norwich side that had failed to win in any of their first six away games of the season, the hosts doubling their advantage just before the half hour.

Philippe Coutinho’s in-swinging corner was flicked on by Steven Gerrard at the near post, Suarez volleying the loose ball home from inside the six-yard box to net his second of the game and put the Reds in cruise control.

It was three before the break and the third came from a familiar source.

Suarez had scored all manner of spectacular goals during his career at Liverpool, but his four-goal showing against Norwich saw the Uruguayan compile his own Goal of the Season collection within the space of just 90 minutes.

The hat-trick goal was perhaps the best of the lot, flicking the ball nonchalantly over Leroy Fer before collecting the ball on the opposite side of the Dutchman and rifling home an unstoppable half-volley into the far corner.

He begins the move surrounded by four Norwich defenders, there was simply nothing they could do.

This was a player at the very peak of his powers, one seemingly capable of scoring from any angle or distance.

You would be hard-pressed to find a better 45 minutes from any player in the Premier League era, Suarez showered with superlatives following a one-man destruction of his favoured opponents.

Any Norwich hopes of some second-half respite were misguided, as Suarez netted his fourth of the evening with 16 minutes remaining, becoming the first South American to score four times in a single fixture in England’s top tier.

It was another finish right out of the very top drawer from the irresistible Uruguayan, an inch-perfect free-kick that had Ruddy once again grasping at nothing but thin air as it whistled into the back of the net.

His four goals vs. Norwich in 2013 was the peak of his brilliance in the Premier League 🤩

There was still time for one more moment of quality after Bradley Johnson’s consolation for Norwich, Suarez teeing up Raheem Sterling with an outside-of-the-boot pass, the teenager gratefully accepting the chance to make it five for Brendan Rodgers’ charges.

Plenty of players have scored four goals in a Premier League fixture, but none have done so with such quality, the catalogue of finishes from Suarez simply not from this planet.

There were 22 players who started that fixture with a further five joining from the bench, but the night remained solely to one man.

If Suarez was the big bad wolf in this analogy, then Norwich were the three little pigs – though there was no brick house to save them from his punishment on this occasion.

That season saw him stand head and shoulders as the best player in English football, scoring 31 league goals in 33 appearances to fire Liverpool agonisingly close to the Premier League title.

His performances were recognised with a Footballer of the Year double and the division’s Golden Boot, before the bright lights of Barcelona came calling and a £75m move to the Camp Nou.

You would not have been surprised if Norwich had packed his bags for him.