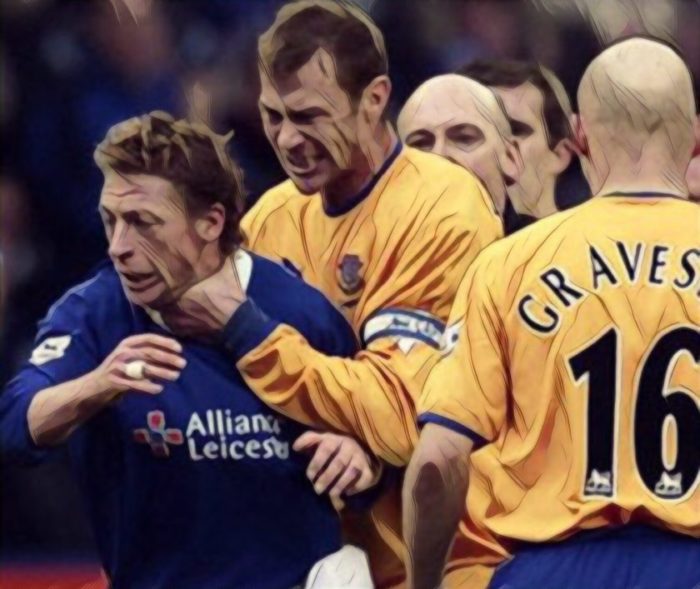 Normally we’d call these lists “5 of the Best” but can we really say best when we’re talking about players who, very often left as big a mark half way up the leg of their opponents as they did to their own teams cause? We don’t want to say worst either because deep down fans love a hardman.

From full on enforcers to niggly so and so’s who love to leave the boot in, the Premier League has seen it’s fair share of hardmen over the years. This is our list, tell us in the comments who we have missed.

Don’t be fooled by his diminutive stature and happy go lucky appearance on I’m A Celebrity because Chelsea legend Dennis Wise was a Class A nutcase. He was like a furious Jack Russel, causing havoc, starting fights and smashing in to tackles like they were going out of fashion.

Below is a classic example of Wise. He basically commits GBH but walks away with just a yellow, everyone else is fighting and Nicky Butt, who he fouled in the first place is sent for an early bath.

Best known now for playing violent psychos in the movies, Vinnie Jones spent his footballing career preparing for those roles by cutting his fellow pros in half, squeezing their balls and generally being the most horrible man in football.

No it’s not 2/5’s of the Famous Five, it’s West Ham hardman and all round kicking machine Julian Dicks. Nicknamed The Terminator, the full back was known to get among the goals but truth be told he was probably happier putting his foot through the calf of an opponent than the ball.

Look was there ever going to be a chance that the Manchester United legend wasn’t going to make it on to this list? Maybe but I wasn’t going to risk him finding out. Hard in the tackle and happy to throw a few punches, he struck as much fear in to his own team-mates as he did the opposition. It must be some specimen to keep him from the top spot…

It had to be Big Dunc. Duncan Ferguson is something of an Everton legend and there’s no doubt that the big man was a quality player. He is the Premier Leagues all time top scoring Scotsman. Very impressive you might say. Mind you he also tops the charts for Red Cards with eight. Things started slowly for Ferguson at Everton, not because he needed time to settle in or get used to the league or anything like that. He just had to spend three months in jail after he was sentenced for assaulting an opponent while at Rangers shortly before making the move to Merseyside.