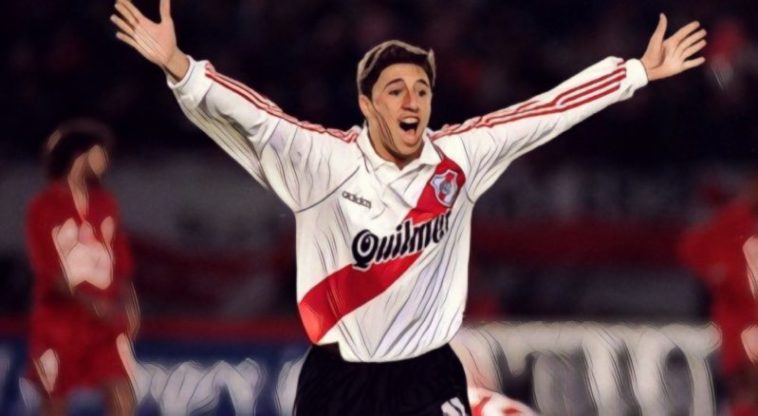 Club Atletico River Plate of Buenos Aires is one of the dominant clubs in South America. The Argentinian outfit has won 36 Primeira División titles, as well as four Copa Libertadores titles.

A key player in the club’s success and finances has been their ability to create and develop world-class players that move on to the biggest clubs in Europe.

Los Millanaros has been producing world-class footballers throughout the 20th and 21st century, with some of the great forwards of historic and modern football having learned their trade at the River Plate academy.

Exposure to their passionate fan base and international competition from an early age, as well as their culture of explosive attacking play have helped River Plate’s academy alumni stand out, seeing them produce some of football’s greatest players.

Here’s a look at five of the best River Plate academy products:

‘El Jefecito’ is back in Argentina playing with Estudiantes after a trip around Europe saw him play for West Ham United, Liverpool and Barcelona.

After impressing with River Plate and Corinthians, Mascherano earned one of the most controversial moves in Premier League history to West Ham which saw the Hammers break third-party ownership rules in the Premier League, before being quickly being passed on to Liverpool.

During his time at Merseyside, he won gold at the Olympics for Argentina, as well as becoming known as an intelligent, aggressive holding midfielder who could read and control games for Rafa Benitez’s side which came close to a Premier League triumph. This saw him earn a move to Barcelona.

With the Catalan outfit, Mascherano adapted to play as a central defender and enjoyed a ridiculously decorated spell, where he collected five La Liga titles, five Copa Del Rey’s, two Champions Leagues and two Club World Cups. His performances were so good at Barcelona, he managed to beat Leo Messi to Barcelona’s player of the year in 2014.

There are not many players Lionel Messi has labelled as a major influence on him in learning how to play football, but Pablo Aimar is one of the few. The creative midfielder inspired Messi with his dribbling, vision, and creativity.

After coming through the ranks at River Plate, he impressed in four seasons with the senior squad, which saw him earn a move to the Valencia team which broke Barcelona and Real Madrid’s dominance in Spain.

‘El Mago’ was a crucial player in Rafa Benitez’s side that won the UEFA Cup and La Liga double in 2004, but injuries and the return of Claudio Ranieri to the club saw Aimar move to Real Zaragoza for €11 million, before signing for Benfica for €6.5 million just two years later.

At Benfica, Aimar recovered his fitness and combined with Angel Di Maria, and Javier Saviola to create a dynamic attack that was central to the Portuguese sides league victory in 2010, and their four league cup victories in each of his seasons there. After his adventures and 52 caps for Argentina, he returned to River Plate, where he made his final appearance in 2015.

Teams that should have won the Champions League: Early 2000s Valencia

The Real Madrid icon is not just one of River plate’s best-ever players, but one of football’s greatest.

The Argentine forward came through the ranks of his boyhood club, River Plate, where he revolutionised South American football, adding pace and one-touch passing to the side which played more technical football based on dribbling, winning two Primera Divisions and a Copa Aldao.

Financial disputes between himself and many other River Plate players saw him move to Milonarios of Columbia, winning four more league titles there, before the ‘Di Stefano’ affair, where General Franco’s regime helped Real Madrid hijack Barcelona’s move for ‘Saeta Rubia’.

This move sparked the most decorated spell any club in Europe has ever seen, as Di Stefano’s unorthodox Argentinian style and combinations with Ferenc Puskas inspired Real Madrid to win eight league titles and five consecutive European Cups in 10 years.

The icon also collected two Ballon d’Ors, five Pichichis, and was the all-time top scorer in the European Cup before Raul broke the record in 2005 – despite taking many more games to do so. After being the driving force in Real’s most successful period ever, many class Di Stefano as Los Blancos greatest ever player.

‘Valdanito’ made an instant impact after graduating from River Plate’s academy, scoring 13 goals from 25 games in his first season. After becoming a key part of the side that won two league titles and a Copa Libertadores, the striker signed for Parma.

After an incredibly difficult start there, not scoring in his first six months, Carlo Ancellotti kept faith in Crespo, who became a revelation and ended up scoring 80 goals across four seasons in the late 1990s with Parma.

His lethal finishing ability earned him a world record transfer fee move to Lazio in 2000. After finishing as Serie A’s top scorer in his first season, an injury-riddled second campaign meant he had less impact on the side, and Lazio sold him to Inter Milan to aid their financial crisis.

Replacing Ronaldo, the striker once again struggled to make the impact he could have due to injuries, and was offloaded to Chelsea. After a decent first season in London, Jose Mourinho’s arrival led to Crespo being loaned to AC Milan, before returning to Inter Milan once again, where he won three straight Scudettos between 2006 and 2009.

Like many of River Plates products, Sivori was a quick, prolific, technically gifted striker. The Argentine made an impact after coming through the youth system in Buenos Aires and earned an international debut for Argentina by age 21, featuring at the South American football championship, where he was named player of the tournament.

‘El Cabezón’ had impressed clubs across the globe and was transferred for a world-record fee to Juventus in 1957. His arrival was part of a resurgence for Juve in Italian football, where he became an inspirational figure for the Turin giants, who won three Serie A titles in his first four seasons.

Silky skills, stunning goals and complete professionalism.#OnThisDay, one of the greatest ⚪️⚫️ players of all time, Omar Sivori, was born. pic.twitter.com/Fu5IpiOgU3

Sivori was the top scorer in Italy in the 1959-60 season and continued to improve, winning the Ballon d’Or in 1961. After his triumph with Argentina in 1957, Sivori switched nationality and represented Italy at the 1962 World Cup.

His character off the field, as well as his impressive ability to score and create goals with his left foot, saw many compare his fellow Argentine Diego Maradona to him.