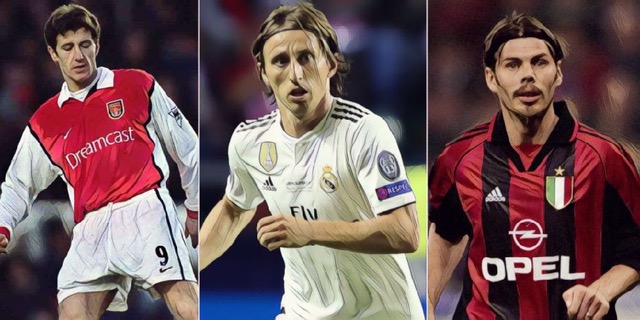 With the inception of the Croatian league, Dinamo Zagreb was able to begin a dynasty that is yet to end. DZG has won 20 of 27 available league titles, and are on course to win another if this season’s Croatian League resumes.

A key aspect in the club’s relentless dominance has been the ability to develop young players good enough to play for the best sides in the world. Their youth academy sides reign supreme in Croatia like their senior team.

The academy, which was named as one of the six best academies in Europe by UEFA in 2011, is utilised regularly, as the club’s system is to play two players from each age group in its youth academy in the first team.

The focus on playing attacking football to continue to dominate Croatia has helped develop a number of technically gifted players with Croatian tenacity stemming from the country’s civil war.

Here’s a look at five of the best Dinamo Zagreb academy products:

The Madrid maestro became the first Croatian to win the Ballon D’or in 2018, ending a decade of Messi and Ronaldo dominance over football’s highest individual award. The central midfielder did this by playing a key role in Real Madrid’s third Champions League title in a row, as well as Croatia’s world cup run which saw them lose to France in the final.

After coming through the ranks at Zagreb, outstanding performances in the 06/07 and 07/08 seasons saw him earn a £16.5 million move to Spurs. After an injury-plagued start, where he struggled to adapt to the demands of the Premier League, his class shone through and he was voted Spurs’ player of the year in 2011.

Real Madrid invested £30 million to sign Modrić, which turned out to be a bargain. The Croat soon became one of the first names on the team sheet for Los Blancos, reaching new heights under Carlo Ancelotti’s guidance.

Becoming a regular in the UEFA team of the year, Modrić’s career peak undoubtedly came when he was awarded the Silver ball for his performances at the 2018 World Cup, before being crowned the best player in the world later that year. He is still in Madrid controlling games, creating goals, and scoring worldies.

Another technically gifted Zagreb product who played at the highest level in Europe is Zvonomir Boban. After scoring 45 goals in 109 appearances for Dinamo, Boban moved to Milan in 1991, becoming one of Europe’s best midfielders.

Although his trophy-laden career is noteworthy, the 51-year-old might be remembered more for his involvement in his country’s civil war. The midfielder threw a flying knee at a policeman in a game between Dinamo Zagreb and Red Star Belgrade in 1990, which is seen as a key happening in the upcoming war in Yugoslavia.

Boban left Zagreb in 1991, to become a crucial player for the Milan side of the 1990s which won the Champions League along with multiple Scudetto’s. One of the classiest attacking midfielders of his generation he captained the Croatian side that came third in the 1998 World Cup. The two-time Croatian footballer of the year is also an AC Milan Hall Of Famer and icon.

After his decade playing in Milan, the Croat became involved with FIFA as their deputy general, as well as a television pundit and Chief Football Officer at Milan. Known as one to speak his mind, Boban made headlines after his sacking as CFO in Milan by comparing the club to North Korea.

Another key player in Croatia’s third-place finish in France was Davor Šuker, who won the golden boot at the tournament in 1998, scoring six times for his country. The striker also won the silver ball at the tournament, finishing only behind Brazil’s Ronaldo.

‘Sukerman’ also came third in the FIFA world player of the year awards in ’98, as his goals made him Croatia’s most important player at their debut World Cup. The striker also starred in Real Madrid’s Champions League triumph in 1998 when they beat Marcelo Lippi’s great Juventus team in the final.

After leaving Zagreb in 1991, the striker made a name for himself as one of the most consistent strikers in La Liga. The Croat was consistently near the top of the scoring charts during his five-year stint at Sevilla, before signing for Madrid, where he became a Spanish and European champion.

Suker finished out his career, with short spells at Arsenal, West Ham, and 1860 Munich and his legacy as a Croatian legend sealed with his 45 goals in 69 international appearances, making him the country’s all-time top goalscorer.

Another Zagreb product who was a member of Croatia’s ‘golden generation’ was Robert Prosinečki, who is one of the few players to have played for both Real Madrid and Barcelona yet he never really fulfilled his potential.

The crafty midfielder came through Dinamo’s academy before moving on to Red Star Belgrade, where he became a crucial player for the team that won three Yugoslav league titles in four years, as well as the club’s most famous triumph: the 1991 European Cup.

His performances earned him a move to Real Madrid, where he suffered a similar fate as Gareth Bale; showing glimpses of his quality that were camouflaged by extensive injuries and lacklustre performances.

Although the Croat did contribute to Croatia’s third-place finish in the 1998 World Cup, he did not help himself in extending his career and reaching the heights he should have. Peter Crouch revealed that he used to smoke during half-time in the showers while at Portsmouth during the 2001/02 season.

His highlights leave you to wonder what he could have achieved, despite all of his accolades.

Although the World Cup appearances are the peak of many of these Croatian stars’ careers, it was also the moment that launched Dario Simić’s to new heights. After coming through Dinamo’s academy to become the club’s most consistent player in the 1990s, his shining performances at the World Cup in France opened up the opportunity for him to play with Ronaldo and Baggio at Inter.

The versatile defender could play anywhere along the backline and did so consistently for club and country. With 100 caps for Croatia, Simić appeared in every tournament that Croatia qualified for in the 1990s and 2000s.

The out and out defender impressed at Inter and made a shock move to their stronger city rivals in 2002. At AC, Simić won Serie A, an Italian Cup, two Champions Leagues, and a Club World Cup. The Croat fell out of favour at Milan under Ancelotti after his first season at the club but remarkably managed to return as a first-team regular in 2006 after being a bit-part player for three years.