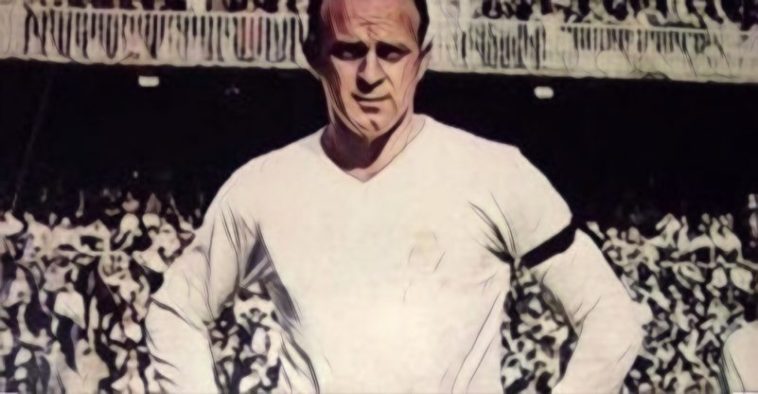 It is not outlandish to suggest that Real Madrid – arguably the biggest club in world football – may not hold quite the same esteem without the contribution of Alfredo Di Stefano.

Di Stefano, in the eyes of many, remains the greatest player ever to adorn the Spanish side’s famed all-white colours, an almost impossibly complete footballer who played a pivotal role in the club’s domination of the early years of the European Cup.

The two-time Ballon d’Or winner scored 308 goals in just 396 appearances for Los Blancos, winning eight league titles and five successive European Cups – developing a reputation as the ultimate big-game player by scoring in each of those finals.

Rightly celebrated as one of the game’s all-time greats, Here are 10 of the best quotes on the legend that is Alfredo Di Stefano:

“For me he was a master, he taught me a lot of things. He wasn’t just a great as a player, but as a person too. As a person he was phenomenal.” – Diego Maradona

“Di Stefano. My hero. For me, he was the most complete footballer in history. That’s my opinion” – Eusebio

“He was my favourite player, and what I most loved about Di Stefano was everything he did he did for the team.” – Johan Cruyff

“He totally controlled the game. You looked at him and asked yourself: ‘how can I possibly stop him?” – Sir Bobby Charlton

“For me the two best players were Alfredo and Pele. He attacked, he defended, he passed the ball, he fought hard and did all of that in a career that lasted over 20 years. He had everything.” – Just Fontaine

“Alfredo Di Stéfano was the greatest footballer of all time – far better even than Pelé. He was, simultaneously, the anchor in defence, the playmaker in midfield, and the most dangerous marksman in attack.” — Helenio Herrera

“Di Stéfano was a great player and saw things others didn’t see. He knew the game back to front and was always physically and mentally well-prepared. Di Stéfano ranks among the greatest players for me.” – Ferenc Puskas

“Today, the openness between Latin American players and European clubs is very much due to the work of Alfredo Di Stefano. He was a trailblazer, and most of all, he was a legend of the game.” – Pele

“Di Stefano was the most important player in the history of Real Madrid and the best footballer of all time.” – Florentino Perez

Read – 10 of the best quotes about Real Madrid legend Raul