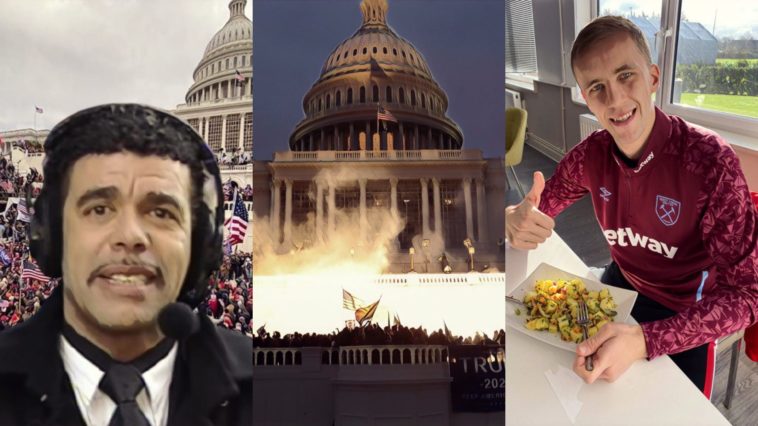 The best and funniest tweets from the world of football this week, featuring a chaotic start to 2021, Chris Kamara reporting from the Washington Capitol riots, the Gabriel Agbonlahor photo that’s been seven years in the making, and West Ham United doing right by Tomas Soucek.

“This is going to be my year.”

"Yeah, I'm not too worried about these protestors y'know. The Capitol building has some of the best security in the world, I'm not sure anybody could get past them…" pic.twitter.com/h5IEODeu2U

Why does Washington currently look like an Eastern European away day?😂 pic.twitter.com/UzgMdaLHOg

Dele Alli, Liverpool centre-backs and the narratives that will dominate the January transfer window

The US Federal Government obviously borrowed the security from Tottenham Hotspur Stadium.

Thought that lad had the Everton crest on his shield for a second. pic.twitter.com/maZgEJO5FW

A crime more heinous than inciting a coup:

Trump will have to tweet some Premier League highlights to get banned.

Things you love to see:

What a surprise at the canteen today? 😂😍🥔 pic.twitter.com/K88Fcw3Zvy

My better half ordered me a personalised Christmas mug from the #NUFC club shop, and here is what they sent. #censorship pic.twitter.com/VU0n1RMaou

Royal Antwerp forward Didier Lamkel Zé showing up to training in a rival Anderlecht shirt as he tries to force a move to Panathinaikos.

No they didn’t let him in. pic.twitter.com/1awTTG8UDr

Finally, we have closure.

After 7️⃣ years of waiting, the iconic photo of Gabby Agbonlahor falling over the barrier has finally been released! 😆@officialga11 😉 pic.twitter.com/bOVRzzFwWS

There’s only one person who can save Celtic’s season.

*Wolves get a penalty*

Is another Liverpool bottle job on the cards?

But they recovered from a rough patch to pick up a massive win in the FA Cup.

Sadly, no one cares.

I have tested negative for Cup fever

A real clash of the titans.

30th January 2021. Mark the date on your calendar. We're sending them to "joint 6th" as we move into top 4. pic.twitter.com/JovcatF3lJ

Alan, is that you?

"And now to Alan McInally with news of a goal at St. Mary's" pic.twitter.com/3R0WwclJbL

This Spurs fan got roasted by the Spartak admin.

Even Birmingham City won this. Do grow up. https://t.co/dxgo2KMrHb

When your name is Mick McCarthy: