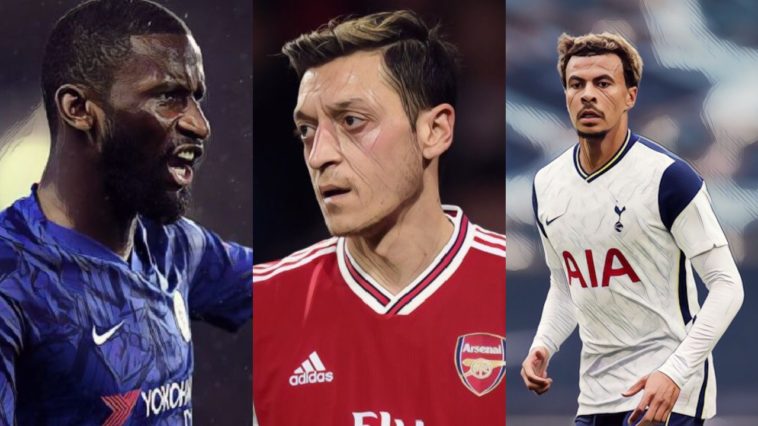 The Premier League is often touted as the best league with the best players in the world, and there’s a fair amount of weight to that claim.

But having so many top quality footballers brings its own problems, one of which being that not everyone can play. There are limited spots available in a highly competitive environment.

Some clubs are better at squad management than others, with a few looking a bit bloated at the moment. There are a few notable names who have suffered this season as a result, and are criminally underused. These guys deserve to be on the pitch, just maybe for another team.

A two-time PFA Young Player of the Year, an England World Cup star, and a one-time precocious talent destined to reach the heights of Steven Gerrard and Frank Lampard.

That was once how Dele Alli was viewed by many, but now he can’t even get into the Tottenham Hotspur squad. It’s become clear that something drastic would have to change for the midfielder to regain his place in the team, otherwise, he will have to move elsewhere pronto to get game time.

Alli evidently does not fit into Jose Mourinho’s tactical schema, but there might be a place for him in Paris. His former manager Mauricio Pochettino has just been installed as PSG head coach, fueling speculation that the Englishman could be heading to the French capital.

Dele Alli, Liverpool centre-backs and the narratives that will dominate the January transfer window

In his opening two seasons at Stamford Bridge, Antonio Rüdiger was a regular under both his namesake Conte and Maurizio Sarri, winning the FA Cup and Uefa Europa League.

The German centre-back continued to be a guaranteed starter under Frank Lampard, with only knee surgery early on in the 2019/20 season otherwise keeping him off the pitch. At some point between the FA Cup final and the beginning of the new campaign, the manager lost faith in him.

Rumours of a fallout between the two men could be the answer, but the fact remains that Chelsea currently have five centre-halves on their books and with Thiago Silva playing so well after arriving in the offseason, he’s been shunted to one side.

Crutches or not, Antonio Rudiger certainly enjoyed his time in Baku! 🙌 pic.twitter.com/8BOdbTtcUw

A defender with far too much quality to be warming the bench, every party will be happy to get a move done this month.

No sane person would argue that Divock Origi should be getting any meaningful minutes ahead of Mo Salah, Sadio Mané or Roberto Firmino, injury permitting. But with Diogo Jota arriving from Wolves, the Belgian was pushed even further down the pecking order.

Jota’s long-term injury has done nothing to help the striker’s playing time this season, making just three league appearances thus far. With scant possibility of opportunities improving in the second half of the campaign, there have been links for a move to a number of clubs in the Premier League and abroad.

Once named in Ligue 1’s Worst XI of the Season, Origi became a Liverpool cult hero after scoring goals at hugely important intervals over the past two seasons, showing that he does indeed have something to offer up front. Now that he’s deemed surplus to requirements at Anfield, he will likely be loaned out by the end of January.

Arguably the best goalkeeper outside the Big Six last season, Dean Henderson was incredibly impressive during his debut Premier League campaign while on loan at Sheffield United. With David De Gea struggling at the same time over at his parent club, there was speculation that the Englishman could take over the number one spot when he returned to Manchester United.

That has not happened. De Gea has retained his status between the sticks while performing better than he did last season, whereas Henderson has had to accept playing here and there in the league and starting in the cup competitions.

Surely no Premier League club have a better backup goalkeeper than Man United, an enviable position to be in, but it raises questions as to why he wasn’t sent back out on loan to aid his development. He can’t improve all that much while on the sidelines after all.

It gets even more confusing when you consider they held onto Sergio Romero in the offseason despite interest from Everton. In fact, there might be an argument that Romero deserves to be ahead of Henderson on this list, given he hasn’t featured at all and is more than capable of starting for a Premier League team.

Given the Blades’ struggles this year, it might very well have been better for all involved had Henderson just spent another year on loan at Bramall Lane.

And then we come to one of the more divisive figures in the Premier League, Mesut Özil. The World Cup winner has been one of Arsenal‘s star players of the past decade, but he hasn’t played a second of football since Project Restart.

The exact reason behind that remains a mystery, although everyone has their theories: his criticism of China’s treatment of Uyghur Muslims, his refusal to take a paycut during the pandemic, Mikel Arteta’s supposed refusal to accommodate a ‘luxury’ number ten.

Whatever the reason, the rancour over Özil’s exclusion increased as performances and results worsened. However, following an upturn in form and the emergence of Emile Smith Rowe in the German’s favoured position, those qualms have been quelled.

It feels like the Gelsenkirchen magician’s time at the club is coming to an end, albeit an unnecessarily ignominious one.

Read: Arteta admits Ozil can leave this month if it’s ‘good for both parties’