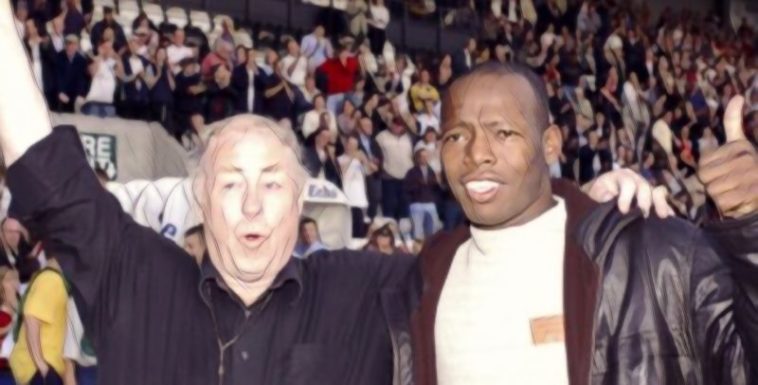 ‘Supporting Darlo under George Reynolds was always a circus, at least at this stage it was fun more than anything else,’ says Darlington fan David Hart, recalling the time his club seemed to be on the verge of one of the biggest transfer coups of all time.

It’s late August 2002, and Darlington are about to take on Carlisle United early into the Nationwide Third Division season (League Two in today’s money). A meeting between these two familiar old foes, both regular incumbents of the basement division, would usually not attract much attention. However, before kick-off, Darlington’s Feethams ground is abuzz with excitement. Their usual crowd has swelled by more than a thousand, all keen to see if the rumours are true.

It would appear so. Before the game, a disbelieving home crowd are treated to Faustino Asprilla being unveiled as Darlington’s new signing. Quakers owner George Reynolds is at his side, grinning manically like a Cheshire cat.

Many will recall the rangy forward lighting up Serie A as a part of Nevio Scala’s brilliant Parma side in the early 90s, before a £6.7 million move to England in 1996, joining Kevin Keegan’s swashbuckling Newcastle United.

Asprilla is still held in high regard by the Geordie faithful, notably scoring a hat-trick on a famous Champions League evening at St James Park, when Newcastle overcame Barcelona 3-2.

But how did Asprilla—a man with a penchant not just for a spectacular goal, but also a big night out—end up within a whisker of plying his trade in England’s fourth tier?

By 2002, the Colombian affectionately known as ‘Tino’ had seen his career stagnate. After leaving Newcastle in 1998, short spells in Brazil and Mexico had fizzled out, and he found himself a free agent. It was then that Asprilla was introduced to George Reynolds, after both attended a Newcastle pre-season friendly.

Reynolds is another character who you could describe as ‘colourful’. A former bare-knuckle boxer and convicted safecracker, he amassed his fortune in manufacturing kitchen worktops. Upon taking over Darlington in 1999, Reynolds promised to get the club into the Premier League, and set upon building a new 25,000 all-seater stadium on the outskirts of town.

For a club with historically averaged attendances of around 3-4,000, this would naturally mean a lot of empty seats. Reynolds needed an A-lister to fill them. Paul Gascoigne had already rebuffed his advances, so after striking up an unlikely friendship with Asprilla, they began negotiations.

A work permit was granted after an appeal, and a contract reported to be worth £17,000 per week, a cut of gate receipts and a rent-free apartment was verbally agreed.

Former Darlington winger Neil Wainwright, who made over 250 appearances for the Quakers, recalls a healthy dose of scepticism amongst the Darlo squad when news first broke of Asprilla’s imminent arrival. ‘George had a habit of making grand gestures,’ he says. ‘A lot of them didn’t come to fruition, so I don’t think any of us believed it at first.’

However, when Tino was paraded pitch side, expectations had to be quickly revised.

Darlington striker Ian Clark was likely to be the man making way for Asprilla and as such had mixed emotions. ‘I was playing up front at the time, so I knew it would probably be my place he would take,’ says Clark. ‘But the opportunity to play with a top international player was exciting.’

As Reynolds proudly showed off his prized asset, he seemed ignorant of the fact that his current employees still had the business of winning a football match to take care of.

Clark explains, ‘We were trying to stay focused and concentrate on the game. Pre-game we were doing a keep-ball as part of the warmup and George walks straight through the middle of it, completely oblivious to what’s going on, and ruined it!’

‘None of the players got to meet Tino; he (Reynolds) didn’t bring him into the dressing room. I’m not even sure Tommy Taylor (the then Darlington manager) met him too.’

Alas, Darlo fans were brought crashing back down to earth just a couple of days later, when news broke that Asprilla had failed to show for a medical. The striker had boarded a flight bound for the Middle East, performing a dramatic U-turn and leaving Darlington’s owner crestfallen.

‘I feel absolutely gutted,’ said Reynolds at the time. ‘I’ve put seven weeks hard work into this and went to tremendous expense. At 11:40pm last night I received information that a club in the Middle East had offered Tino a better deal. He reneged on the deal with us.’

Hart remembers hearing the news with a rueful grin. ‘It was one of the few times in life where I said, “I told you so” to myself. ‘You could tell it did actually hurt Reynolds, but I have to say he didn’t get any sympathy from many fans, as by then most were seeing through his leadership style and were more concerned about the nonsensical stadium he was planning to build.’

Asprilla’s eleventh hour change of heart also caught the Kidderminster Harriers’ programme editor on the hop. Destined to make his Quakers debut at the Harriers Aggborough Stadium, the Colombian was listed on the programme for the first and only time as a Darlington player.

Speaking to FourFourTwo in 2008, Asprilla offered an explanation as to why he didn’t sign. ‘On the phone I was given one contract, and in person he (Reynolds) gave me another. Everything changed: money; where I was going to live…lots of things. So we never agreed on a contract.’

A Tino-less Darlington moved into the new stadium (named the Reynolds Arena, naturally) in 2003. As many had feared it quickly became a financial millstone around the club’s neck. Three administrations in nine seasons followed, culminating in the club being relegated five divisions, into the Northern Premier League.

Today, Darlington compete in the National League North and harbour ambitions to one day make a return to the Football League.
Quakers no longer play at the Reynolds Arena, which sits mildewed, a stark reminder of one man’s folly.

The club is now fan-owned and is run on an even keel, a scenario Hart is far more comfortable with.

‘If anything, the Tino farce underlines why we are in such a good place now. No daft owners making false promises and then holding a gun to our heads when finances get tough. We learned the hard way and we watch through our fingers as we see other clubs tread the same path.’

‘Darlington as a club now is for me a template for what other clubs can aim for: fan funded; led by a truly outstanding Chief Executive; backed by an energetic volunteer board, and with a great manager.’

Reynolds left the club in 2004. A year later he and an associate were stopped by police, who discovered £500,000 cash in the boot of their car. He subsequently admitted to money laundering and was sentenced to three years in prison.

As for Asprilla, despite being long retired, he continues to make headlines—posing nude in a Colombian magazine, and being placed under home arrest for allegedly firing a machine gun at a security checkpoint.

He has even found the time to launch his own brand of flavoured condoms, which in 2020 he sold at a cut-price rate to ease his fellow Colombian through the coronavirus pandemic (!). Whether or not his gesture was appreciated, it’s fair to say it’s Darlo fans who still get a sour taste in their mouths when they remember the events of 2002, or hear the name Faustino Asprilla.

Read – Faustino Asprilla: The mercurial Colombian who could win a game on his own – if he felt like it