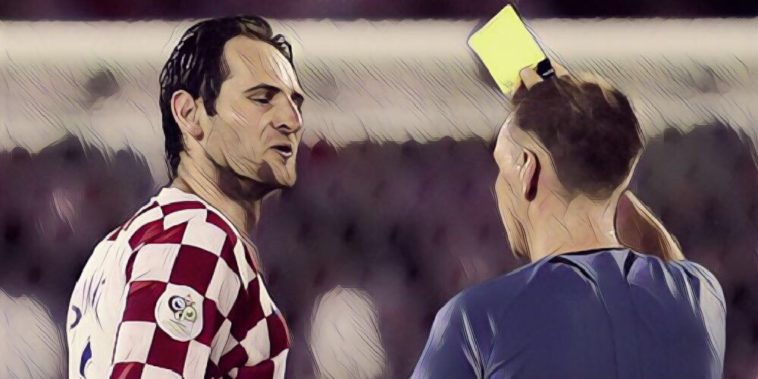 They are often the centre of controversy, but referees are only human. However, every now and then there is an incident that beggars belief. Here are five of the worst refereeing decisions in footballing history.

There are plenty of examples of goals that should have stood, but there are not many goals that have been given that weren’t even on target, but in 2008 this is exactly what happened when Watford faced Reading.

With just 15 minutes on the clock and the score 0-0, Reading got a corner. The delivery hit Watford’s John Eustace and was heading out for another corner, before a Reading player hooked the ball back into play. Linesman Nigel Bannister flagged, and after some consultation with his assistant, Attwell amazingly awarded the goal to Reading, instead of a corner.

To compound matters, he then sent Watford boss Aidy Boothroyd to the stands for having the audacity to complain about what would forever be known as the “Ghost Goal”

Five years after the English ghost goal, there was another one in Germany. While this one isn’t quite as bad as one shown above, it’s still pretty poor from the referee. When Bayer Leverkusen faced Hoffenheim in 2013, the hosts had a corner from the left. Stephan Kiesling got his head to the ball but it went wide of the post, but inexplicably the ball went through the side netting and into the back of the net. Instead of giving a goal kick, Herr Brych awarded the home side a goal!

While there were a few bodies in the way, the referee was in a decent enough position, and the initially reaction of the goalscorer should have really been a big give away…

Being a referee is never an easy job, but being able to count to two yellow cards should be one of the easiest things in the job. However, in the 2006 World Cup fixture between Croatia and Australia, Premier League referee Graham Poll got it so badly wrong, in what turned out to be a comedy of errors.

The man in the middle ended up showing Croatia’s Josip Simunic THREE yellow cards before finally producing the red. Not only that, but he blew the full time whistle just as what would have been Australia’s winner crossed the line, and also missed a blatant Croatian handball in the penalty area as the game ended 2-2

A bad day at the office for sure, and a day which could have cost him the chance to referee the World Cup final?

There have been plenty of decisions where the ball has crossed the line but has been ruled out, but back in 2010, England were royally screwed by the officials.

After falling 2-0 behind to old rivals Germany in the World Cup knockout stages, Fabio Capello’s men pulled a goal back. Then came the incident which ultimately changed Football forever.

Frank Lampard hit the ball from the edge of the box, over the top of Manuel Neuer, off the underside of the bar and into the back of the net. The ball had so much spin on it that it bounced back out of the goal and into play. However, it was so far into the back of the net that everyone in the stadium and the watching world could see it was a goal, well, apart from two men it seems, the referee and his assistant who both missed it.

This ‘goal’ set into motion the goal line technology that we see in use today.

I could have quite easily used failure to spot Thierry Henry’s handball v Ireland in Paris as my final example, but it would have been a little harsh on the referee.

While that decision was totally wrong and cost Ireland a place at the World Cup, it was a tough one for the officials to see the Henry’s act of dishonesty. However, when Diego Maradona slapped the ball into the back of the net in 1986 like a pro volleyball star, it was blatant.

While he was one of the greatest footballers to ever grace the planet, Maradona tarnished his reputation (in England at least) with one of the most obvious acts of cheating ever seen.

His famous ‘hand of god’ goal for Argentina at the Mexico World Cup saw England dumped out of the tournament.