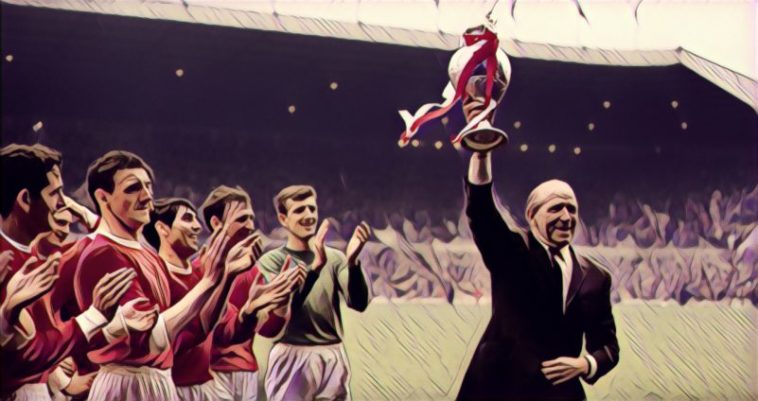 Sir Matt Busby is the man credited with laying the foundations for Manchester United to become the biggest club in world football.

The Scottish manager lit up English football with a vibrant young side nicknamed the Busby Babes during the 1950’s.

However, disaster struck in 1958 when a plane carrying his famous team back from a European Cup tie crashed in Munich taking the lives of 23 passengers, including many key players.

Despite only barely surviving the crash himself and losing the nucleus of his team, Busby rebuilt United’s playing squad and then went on to become the first English side to win the European Cup in 1968.

He will forever be remembered by United fan’s as one of the club’s most inspirational characters.

“I never wanted Manchester United to be second to anybody. Only the best would be good enough.”

“Nobby Stiles a dirty player? No, he’s never hurt anyone. Mind you, he’s frightened a few!”

“Don’t read them then.” When Sir Alex Ferguson complained about abuse from newspapers.

“Over the years people called several players the new Duncan Edwards…first Dave Mackay, the Bryan Robson. But none of them came close. He was the only player that made me feel inferior.”

“I do not worry about conceding goals because I know my forwards will double it at the other end.”

“At Manchester United we strive for perfection and if we fail we might just have to settle for excellence.”

“He was able to use either foot – sometimes he seemed to have six.” On George Best.

“Manchester is my Heaven.” When he turned down the Real Madrid job after their told him it would be like ”managing Paradise.”

“Resting in Interlaken, Germany was one thing and facing Old Trafford another. When I approached the ground and moved over the bridge along which our supporters had squeezed fifty abreast in there tens of thousands to shout for us I could scarcely bear to look. I knew the ghosts of the babes would still be there, and there they are still, and they will always be there as long as those who saw them still cross the bridge, young, gay, red ghosts on the green grass of Old Trafford.” On his return to Manchester after the Munich air disaster.

“This is the greatest night of my life, the fulfillment of my dearest wish to become the first English side to win the European Cup. I’m proud of the team, proud for Bobby Charlton and Billy Foulkes, who have travelled the long road with me for the last 11 years.” After winning the European Cup in 1968.