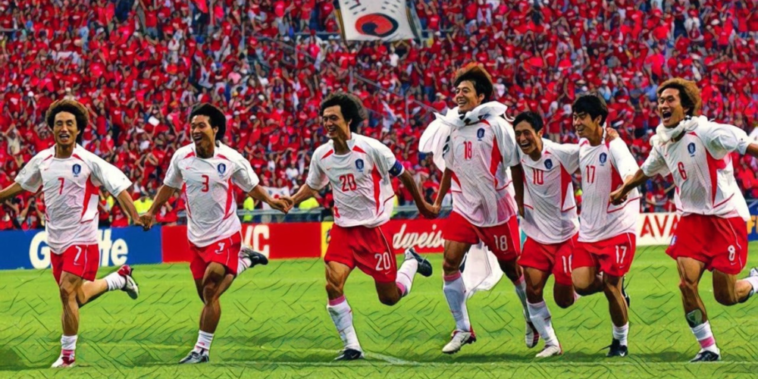 Qatar 2022 has already been filled with shocks and surprise, with no shortage of unfancied teams producing results to remember.

Japan have impressed to beat both Germany and Spain in the group stage, while Morocco have topped a tricky-looking group containing Croatia and Belgium in unbeaten fashion. With Australia also in the knockout stages for just the second time, there’s potential for an underdog to continue ripping up the script this winter.

In tribute to their successes so far, we look back at five memorable World Cup surprise packages.

Cameroon announced their arrival on the world stage in stunning fashion at Italia ’90, springing one of the World Cup’s greatest surprises with an upset of world champions Argentina in the opening fixture.

Despite being reduced to nine men, Cameroon edged the Argentines 1-0 in a World Cup classic, with François Omam-Biyik heading home a famous winner. Pre-1990, African teams had been viewed as little more than participants on the World Cup stage, but Cameroon’s campaign helped changed perceptions about the continent’s finest talent.

After beating the holders, the Indomitable Lions beat Romania and progressed as group winners despite defeat to the Soviet Union in their final fixture. Colombia were edged in the last 16 after a double from Roger Milla, before Cameroon’s World Cup came to an end after an entertaining encounter with England in the last eight.

32 years ago today in Naples:

Roger Milla scores twice vs Colombia to take Cameroon into the quarter-finals of Italia 90.

The oldest swinger in town.

Valery Nepomnyashchy’s were seven minutes from reaching the semi-finals, before Gary Lineker’s penalty forced extra-time. A second spot-kick from Lineker sealed progress for England in the added period, though Cameroon departed having become the first African team to reach the quarter-finals.

Five of the biggest World Cup shocks ever

Few fancied Bulgaria to make an impression at the 1994 World Cup, having snuck into the tournament in dramatic fashion with a last-gasp qualification upset of France in Paris.

A comprehensive 3-0 defeat to Nigeria in their opening fixture added to that theory, but Bulgaria bounced back to enjoy a remarkable run in the United States.

Bulgaria thrashed Greece 4-0 in their next fixture, before a 2-0 win over Argentina sealed their progress to the knockout rounds. Mexico were then beaten on penalties in the last 16, to set up a quarter-final showdown with world champions Germany.

🇧🇬 The Hristo Stoichkov free-kick that sparked one of the biggest upsets in #WorldCup history was sumptuous 🎯#OnThisDay | #USA1994pic.twitter.com/gZM1jflfYU

Bulgaria fell behind to a Lothar Matthaus penalty, but star man Hristo Stoichkov brought the sides level with a fantastic free-kick. Three minutes later, Yordan Letchkov headed home a second to complete the comeback and send the Bulgarians into the last four.

Italy proved a step too far in the semi-finals, though Bulgaria bowed out after a best-ever finish at the World Cup. Stoichkov claimed the Golden Boot after scoring six goals and was later named as winner of the Ballon d’Or.

South Korea were the co-hosts of the 2002 World Cup alongside Japan, with the tournament heading to the Far East for the first time.

Few had backed either of the host nations to make a significant impact, but South Korea upset the odds – eliminating Italy and Spain – to reach the semi-finals, a run that no Asian team has ever emulated.

Guus Hiddink’s side topped a group containing Portugal, Poland and the USA to exceed early expectations, before their momentum continued in the knockout rounds. However, it was a run shrouded in controversy.

Against a much-fancied Italy team in the last 16, South Korea won 2-1 in extra-time courtesy of Ahn Jung-hwan’s late header. However, the Azzurri were left enraged at the officiating in the contest, as several crude challenges from the South Koreans went unpunished.

Francesco Totti was also sent off for an alleged dive, while Damiano Tommasi had a goal wrongly ruled out for offside. Such was the anger from the Italians, goalscorer Ahn Jung-hwan saw his career curtailed at Serie A side Perugia after owner Luciano Gaucci cancelled his contract.

Spain were next to be angered as conspiracy theories circled, following two disallowed goals in their quarter-final exit to the co-hosts. After a goalless draw South Korea won 5-3 on penalties with Joaquin missing the decisive kick for the Spanish.

South Korea’s run eventually ended in the last four, as Michael Ballack’s goal earned Germany a 1-0 win and a place in the final.

Turkey secured qualification to the World Cup for the first time in 48 years in 2002, navigating a playoff with Austria to reach the tournament for just the second time.

After losing their opening fixture to Brazil, Turkey bounced back with results against Costa Rica and China to reach the knockout rounds for the first time in their history.

Senol Gunes’ talented side – featuring the likes of Hakan Şükür, Hasan Şaş and Yildiray Bastürk – gained momentum in the last 16 with a win over co-hosts Japan, before edging fellow surprise side Senegal in the last eight.

A semi-final rematch with Brazil proved a bridge too far as Ronaldo’s goal secured the South Americans passage into the final, but Turkey regrouped to defeat South Korea in the third-place playoff.

It was a fantastic run for Turkey, who have not qualified for the World Cup in the two decades since their storied success in the Far East.

Costa Rica might have been cursing their luck when the draw for the 2014 World Cup was made, pitted in a Group of Death against Italy, England and Uruguay.

Each of their three opponents were ranked inside FIFA’s top ten, but the outsiders upset the odds to top the group and reach the knockout rounds.

Costa Rica came from behind to beat Uruguay 3-1 in their opener, before a second shock stunned Italy and put them in control of the group. A goalless draw with England confirmed progress as group winners, where Greece awaited in the last 16.

Despite conceding a stoppage-time equaliser, Costa Rica won on penalties to reach the quarter-final for the first time.

Jorge Luis Pinto’s unfancied side then pushed the Netherlands all the way in the last eight, before bowing out on penalties following a goalless draw.