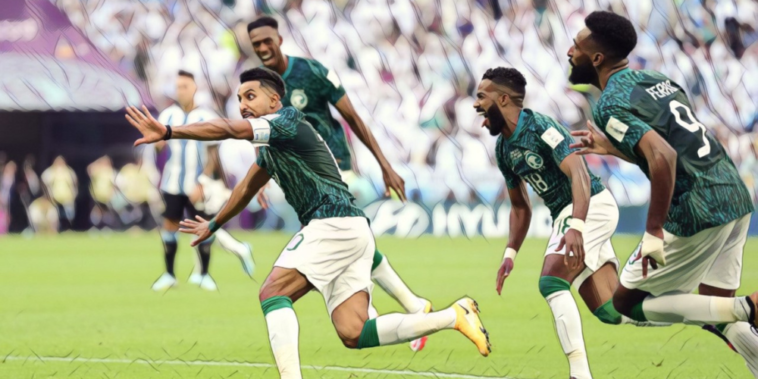 There’s nothing quite like a good upset and the World Cup has thrown up some incredible results throughout its history.

World Cup tournaments have contained some unforgettable underdog stories, as unfancied nations ripped up the script to upset the established elite of the international game.

Argentina are the latest side to have been on the receiving end of a World Cup shock, as Lionel Messi and company – among the favourites to win the 2022 tournament in Qatar – crashed to defeat in their opener to Saudi Arabia.

England were embarrassed on their first appearance at the World Cup, as a USA team comprised of part-time players upset a side many fancied to be crowned world champions.

The Three Lions had forged a reputation as one of football’s finest teams since the Second World War and counted Stanley Matthews among their ranks. The winger was regarded as one of the best players in the world at that time and later won the first Ballon d’Or in 1956.

In contrast, the USA were relative minnows. They arrived at the World Cup having lost their last seven international fixtures, including heavy defeats to Italy (7-1) and Norway (11-0). What followed was a staggering upset in Belo Horizonte, as the USA snatched a 1-0 win courtesy of Joe Gaetjens.

Bill Jeffrey, the head coach of the USA, had declared his players “sheep ready to be slaughtered” ahead of the clash, but watched on as the Americans upset their illustrious opposition.

The 1966 World Cup is largely remembered for England’s success on home soil, as Bobby Moore hoisted aloft the trophy after a thrilling final win over West Germany.

Earlier on in the tournament however, North Korea had stunned the football world. Up against an Italy side who had twice been crowned champions, the Asian side triumphed.

The Koreans had failed to win in their opening two group games, following a 3-0 loss to the USSR with a draw against Chile. Italy were in pole position to qualify behind the USSR and contained a strong core of players from the Milan clubs, who had won three of the previous four European Cups between them.

#OnThisDay in 1966, North Korea produced one of the biggest @FIFAWorldCup shocks of all time at Ayresome Park, defeating Italy 1-0 🏟️🌍🏆

North Korea became the first Asian team to progress from the first round, after an upset of epic proportions in Middlesbrough. Pak Doo-ik was the hero as he hit a low effort past Enrico Albertosi.

Korea threatened another upset in the last 16, after racing into a 3-0 lead against Portugal. Four goals from Eusebio turned around the tie as Portugal prevailed 5-3 and prevented the spirited Koreans from earning another entry on this list.

Argentina’s upset in Qatar was not the first time the South American superpower have been shocked, with none more memorable than an opening defeat at Italia ’90.

Diego Maradona had inspired the La Albiceleste to World Cup success in Mexico four years earlier, but was unable to stop his side from falling to a famous defeat to Cameroon at the San Siro.

It was far from a flowing game for the neutrals, but contained an unforgettable narrative. The world champions were beaten – and on occasion battered – in Milan, as Cameroon’s unfancied side secured a shock win.

📼 First up? Francois Omam-Biyik's incredible header getting the party started at Italy 1990 as Cameroon shocked Argentina 😲

Francois Omam-Biyik scored the second-half winner as the The Indomitable Lions – made up largely of players from France’s lower divisions – upset a star-studded Argentina team. Few can forget the imagery of Claudio Caniggia being scythed down in the closing stages, as the forward hurdled two uncompromising challenges before Benjamin Massing chopped him in half. It was a challenge that earned Manning a red card, as Cameroon ended with nine men.

Despite that disadvantage, Cameroon held on for the win. They went on to become the first African team to reach the quarter-finals, while Argentina regrouped to reach the final.

France travelled to the Far East as defending champions in 2002, with Les Bleus taking on Senegal in the tournament’s opening game.

A star-studded French side were stunned in Seoul however, as Papa Bouba Diop scored the decisive goal to hand the African side a memorable win. France toiled in the absence of talisman Zinedine Zidane, though their all-star cast included names such as Thierry Henry, David Trezeguet and Patrick Vieira.

🇸🇳 The beloved coach & midfielder, who have both since passed away, and the historic day they inspired will never be forgotten ♾ pic.twitter.com/zKZyHFfbCk

Seven of the starting side had began the 1998 World Cup final win over Brazil, but France were a poor imitation of world champions during a disappointing defeat. El Hadji Diouf tormented the ageing French backline, before Diop turned in from close range for a famous winner.

It was a goal that began Senegal’s passage to the last eight on their World Cup debut, as the Lions of Teranga became just the second African team to reach the quarter-finals. France crashed out in the group stage in one of the World Cup’s most disappointing defences.

Saudi Arabia stunned Argentina to produce the biggest World Cup upset in modern memory, coming from behind to beat a side dubbed among the tournament favourites pre-game.

Argentina arrived in Qatar in confident mood, just one game short of matching Italy’s all-time unbeaten record by a national side. La Albiceleste had not lost since defeat to Brazil in the 2019 Copa America semi-finals, a run of games which had included a 2021 Copa America triumph and a 3-0 win over European champions Italy in the Finalissima.

Confidence was high ahead of their group stage opener against Saudi Arabia, a side ranked 51st in the world and who had won just three games in their World Cup history. The game had appeared to be heading in predictable fashion as Argentina dominated the opening exchanges. Lionel Messi opened the scoring from the penalty spot, before Argentina correctly had three first-half goals disallowed for offside.

The bold approach from Saudi Arabia – including a high defensive line – paid off in the second period however, as the Green Falcons fought back into the contest. Saleh Al Shehri levelled with their first shot on target, before a brilliant goal from Salem Al Dawsari put Saudi Arabia ahead.

Some determined defending in the closing stages completed a sizeable scalp and led to wild celebratory scenes from Hervé Renard’s side.