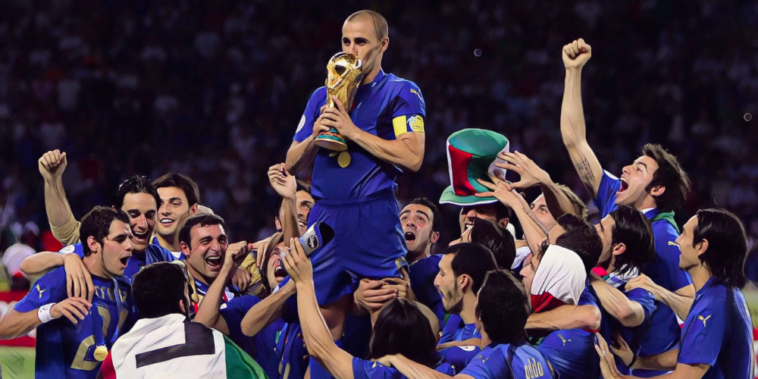 Every four years the watching world pauses for one of football’s greatest events, as the World Cup takes centre stage on the sporting calendar.

Each tournament has something to remember and savour and the 2006 edition was no different. After a debut in the Far East four years earlier, the World Cup returned to a traditional powerhouse as Germany proved fine hosts.

It was a breakthrough tournament for some illustrious names and a farewell on the major stage for several others. Ahead of this year’s festival of football, we remember five of the most iconic players from the 2006 World Cup.

The orchestrator of the eventual champion’s midfield, Andrea Pirlo was the creative centre-piece of an Italy side who relied on a resolute defence and gifted guile to emerge as World Cup winners.

Pirlo led the tournament for assists and was the conduit of the Azzurri team, winning three man-of-the-match accolades including in both the semi-final and final.

He was outstanding in the last four win over Germany in particular, controlling proceedings in signature style and providing a moment of real quality to settle the tie.

🗣️ "I don't feel pressure. I spent the afternoon in Berlin sleeping and playing the PlayStation. In the evening, I went out and won the World Cup." 🛌🎮🏆

🇮🇹 5 years ago today @Pirlo_official made the final appearance of an exceptional @azzurri career 👏pic.twitter.com/hWYOjATqJM

In the final seconds of extra-time he kept his cool on the edge of the area as German shirts swarmed around him, before picking out Fabio Grosso with a reverse pass for the 119th-minute opening goal.

Instrumental in Italy’s fourth triumph on the world stage, he ended his international career with 116 caps and regarded as one of the finest midfielders of a generation.

Miroslav Klose burst onto the scene at the 2002 World Cup, scoring five goals – all of which were headers – to finish as runner-up for the Golden Boot.

Four years later he was established as Germany’s leading centre-forward and went one better on home soil, finishing as the World Cup’s leading scorer as Die Mannschaft reached the last four.

Klose bagged braces against Costa Rica and Ecuador in the group stages, before netting a crucial late equaliser in the quarter-final win over a free-scoring Argentina side.

Klose ended the tournament with five goals and ended his international career as Germany’s record goalscorer. He also added a further six goals across the 2010 and 2014 editions to become the most prolific goalscorer in World Cup history.

Zinedine Zidane waved farewell to football following the 2006 World Cup, but not before an extraordinary tournament from the France midfielder.

Zidane had been the hero of France’s World Cup win on home soil eight years earlier, before starring during Les Bleus run to the final.

France had been fortunate to reach the knockout rounds after an unconvincing group stage, but Zidane’s brilliance carried Raymond Domenech’s team all the way through to the Berlin showpiece.

He was the inspiration behind a comeback win over Spain in the last 16 and produced one of international football’s most memorable individual showings to see off Brazil in the quarter-finals.

#OnThisDay in 2006, Zinedine #Zidane put on a footballing clinic against Brazil that helped propel Les Bleus into the semi-finals of the @FIFAWorldCup! 🙀 #FiersdetreBleus pic.twitter.com/txV6HEnuFM

Zidane scored from the spot to decide the semi-final with Portugal, before netting an audacious Panenka penalty in the final.

His final ended in infamous fashion after a red card for head-butting Marco Materazzi, a moment which changed the course of the game as France were beaten on penalties.

It was a sad end after a tournament which could have ended Zidane’s career with the ultimate glory, though he collected the Golden Ball accolade as the finals’ finest footballer.

Fabio Cannavaro became just the third defender in history to win the Ballon d’Or in 2006, his recognition coming after captaining Italy to World Cup success.

Cannavaro was outstanding throughout the course of Italy’s tournament, as the Azzurri conceded just two goals – an own goal and penalty –  in their victorious campaign.

The centre-back was at his imperious best to deal with opposition attackers, whilst his leadership skills shone through as he marshalled the backline and bellowed orders to those around him.

His performance in the semi-final win over hosts Germany saw the defender dubbed ‘The Wall of Berlin’, a display which included a brilliant headed clearance and follow-up challenge on Lukas Podolski that emphasised his defensive determination.

Gianluigi Buffon was part of Italy’s squad for five consecutive World Cups, with the goalkeeping great one of just four players to have achieved the feat alongside Mexico’s Antonio Carbajal and Rafael Marquez, and German icon Lothar Matthaus.

After the controversy of Italy’s exit in Japan and South Korea four years earlier, Buffon ensured little got past the Azzurri defence as Marcello Lippi’s side conceded just twice on their way to lifting the trophy.

Buffon could do little to prevent either goal, but made some superb saves throughout the course of the campaign – proving a commanding and authoritative presence in the box – to claim the Lev Yashin award as the tournament’s best goalkeeper.

Legendary shot-stopper @gianluigibuffon, represented 🇮🇹 @azzurri at five successive FIFA World Cups, a record which includes a memorable victory at Germany 2006, where he also received the award as the best goalkeeper of the tournament. pic.twitter.com/CNnmPRcYra

The World Cup win was the highlight of an international career that saw Buffon earn a national record of 176 caps, with his winners’ medal in Berlin adding weight to his claim as arguably the greatest goalkeeper of all time.

Read Also – Our writers’ predictions for the 2022 World Cup