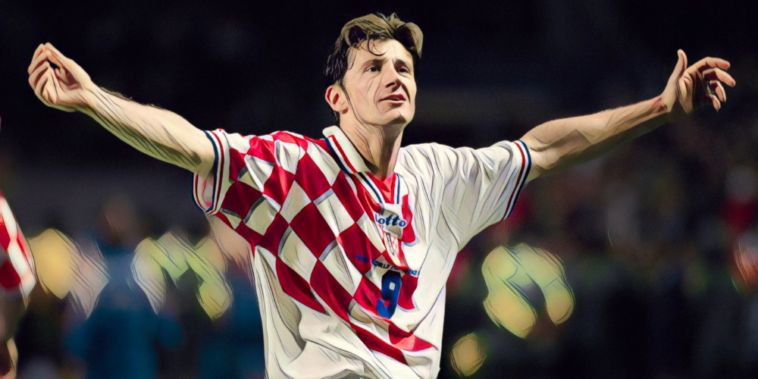 The 1998 World Cup was held in France with Les Bleus becoming the seventh nation to win the tournament after becoming world champions for the first time on home soil.

France had missed the World Cup four years earlier, but a superb side beat Brazil to make history in the final. Debutants Croatia thrilled to reach the last four, while David Beckham became public enemy number one in England following his role in the Three Lions’ exit.

Here are five of the most iconic players from the 1998 World Cup.

Ronaldo arrived at the World Cup as the planet’s finest footballer and lived up to that billing with a sensational tournament in France.

The brilliant Brazilian was electric as the Selecao reached the final, producing a level of performance which has since seen R9 hailed as arguably the greatest number nine of all time. He scored just once in the group stage, but burst into life as Brazil reached the knockout rounds.

Ronaldo’s double saw Chile thrashed 4-1 in the last 16, before he turned provider with two assists in a thrilling 3-2 win over Denmark in the last eight. His fourth goal arrived in the semi-final win over the Netherlands, though his final was infamously impacted after the forward suffered a convulsion on the afternoon of the game.

It remains one of the most iconic moments in World Cup history as Ronaldo – who won the Golden Ball as the tournament’s best player – took to the field as a shadow of his usual self, a crucial sub-plot in Brazil’s failed bid to defend their 1994 crown.

France’s success was built on a brilliant backline with Lillian Thuram perhaps the stand-out. The defender was a monstrous presence as Les Bleus won the World Cup on home soil, conceding just twice on their way to being crowned world champions.

France kept clean sheets in five of their seven fixtures, including the 3-0 final win over Brazil at the Stade de France. Thuram’s intervention had been crucial in reaching that decider, as the defender scored twice to secure a 2-1 win over Croatia in the semi-finals.

🗣️ “My mother was in the stands. They told her I'd scored – she couldn’t understand it. When they told her I’d scored again, she fainted."

🇫🇷 Lilian Thuram scored in only 1 of his 142 caps – twice in a #WorldCup semi-final 🦸#OnThisDay | @FrenchTeampic.twitter.com/rWmbSf9bZE

Remarkably, that defining brace were the only goals Thuram scored for France in a career that saw the full-back win a record-breaking 142 caps.

Croatia made their mark in the nation’s first appearance at a World Cup finals, emerging as dark horses for the tournament to reach the last four. The Croatians had impressed in their first tournament appearance as an independent nation at Euro 1996, before shining again two years later in France.

Suker was the star of a talented side and made the most of the ammunition provided by the likes of Zvonimir Boban and Robert Prosinecki, as he scored six goals to win the World Cup’s Golden Boot.

He netted the only goal of the game in 1-0 wins over Japan and Romania and failed to find the net in just one of Croatia’s seven fixtures. Suker gave Croatia a lead in their semi-final defeat to France, before scoring the winner as Miroslav Blazevic’s team beat the Netherlands in a play-off to finish third.

Suker’s superb finishing saw him score six goals to end as the tournament’s leading scorer ahead of Christian Vieiri and Gabriel Batistuta, while he also received the Silver Ball as the World Cup’s second-best player, behind Ronaldo.

Christian Vieiri was one of the finest forwards of the 1998 World Cup, with the Italian’s five goals seeing him finish as runner-up for the Golden Boot.

Vieri was a brutish presence for the Azzurri in France, as he formed a fine partnership with Roberto Baggio and failed to score in just one of Italy’s games.

He opened the scoring in Italy’s first fixture against Chile and showcased an impressive repertoire of finishing at the finals, including a delightful chipped effort against Cameroon and a powerful surge and finish in the last-16 win over Norway.

Powerful, opportunistic, and lethal around goal, ‘Bobo’ underlined his reputation as one of Europe’s leading number nines with a brilliant run of form. He scored nine goals in nine career appearances in the World Cup, with no Italian player having ever scored more.

In truth, Zidane’s best came two summers later as France won Euro 2000, but it is difficult to overlook a footballer whose contribution crowned the host nation champions.

Zidane’s tournament proved mixed on route to the final, a campaign which included an assist for Christophe Dugarry in France’s first game, a brilliant spin and pass in the build-up to Thierry Henry’s opener against Saudi Arabia, and a red card against the same opposition.

After returning from suspension Zidane helped France into the final, but was goalless heading into the showpiece. That all changed following his match-winning contribution at the Stade de France as Zidane scored twice – both headers from corners – to crown the French world champions.

While not quite at his mesmeric best during the finals, his key role in France’s final success saw Zidane become the face of Les Bleus’ triumph.