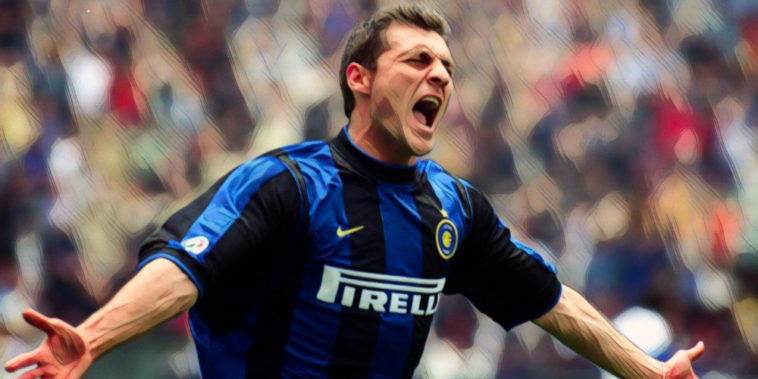 Christian Vieiri earned the nickname Il Toro during a career of huge highlights in Italian football. Translated as ‘The Bull’, it is a fitting moniker for a forward whose pace and power bullied backlines.

One short revisit of Vieiri’s best career moments is enough to paint a picture of a complete centre-forward, one whose physical presence and direct approach tormented defences and made him one of the great goalscorers of his generation.

Vieri was born in Bologna, before moving to Australia as a child. His father, Roberto, was a professional footballer whose occupation took him to Sydney in the twilight of his playing career.

Growing up with a passion for football and cricket, it was the former path that Vieri would pursue and he returned to Italy aged 14 to begin an ascent to the upper echelons of the sport.

He signed for Torino and made his debut during the 1991/2 campaign, scoring in a 2-0 win over Lazio in the Coppa Italia. That season ended with a runners-up medal in the UEFA Cup after Torino lost to Ajax on away goals, but he moved on and dropped down a division to sign for Pisa.

That move began a nomadic existence for the bullish forward, who would represent nine clubs in nine seasons, a path that began in humble surroundings and ended with Vieiri as football’s most expensive talent of all time.

Lower league goals at Pisa, Ravenna and Venezia persuaded Atalanta to give Vieri a chance in Serie A, and a respectable return of goals saw Juventus make their move.

Vieri spent just one season with Juventus, but grew in influence towards the end of the campaign and starred as the Bianconeri won Serie A and reached the Champions League final.

He scored 10 goals in 16 games in the absence of the injured Alen Boksic and Alessandro Del Piero to fire Juventus to the Scudetto, before netting in both legs of the Champions League semi-finals against Ajax.

Two goals in a 6-1 thrashing of AC Milan – in which he bulldozed an ageing Franco Baresi – further emphasised his status as one of Europe’s best emerging forwards, but he departed at the end of the season to sign for Atletico Madrid.

It was a deal that caused surprise given Juventus’ strength and Atletico’s inconsistent performances in previous seasons, and one Vieri later admitted was financially motivated.

“One day [Chief Managing Director Luciano] Moggi called me into his office with my agent, Bettega,” Vieri stated in his autobiography.

“Moggi claimed that the club couldn’t offer me more than two million lira per season while I was aware that Atlético were prepared to offer 3.5 million lira. I said to them immediately, ‘Okay, I’m off to Spain’ and that was the end of the meeting. I admit that the motivation for this move was purely economic. If I could have turned back time, I’d have stayed in Turin.”

The move to Madrid proved the making of ‘Bobo’, however, as he took Spain by storm in a sensational debut season.

He scored his first goal in a UEFA Cup tie with Leicester, before getting off the mark in La Liga with a brace against Celta Vigo. That double opened the floodgates as he scored in four consecutive league games, culminating in a hat-trick as Atletico thrashed Real Zaragoza 5-1.

Vieiri’s goals were both regular and remarkable, including a thumping effort against Real Oviedo and an audacious swivel and finish from an implausible angle – part of another hat-trick – in a UEFA Cup clash with PAOK.

At the end of the season Vieri was the league’s leading scorer, his 24 goals from 24 games five more than Rivaldo in the race for the Pichichi Trophy.

That haul included scoring all four goals in a 5-4 defeat to UD Salamanca, and twice in a 5-2 thrashing of Barcelona in the capital.

Once again, however, he was on the move as Lazio spent £20 million to bring him back to Italy. Vieri had starred for Italy at the 1998 World Cup, scoring five goals, to trail only Croatia’s Davor Šuker in the race for the Golden Boot.

He continued to fire at Lazio and formed a fine partnership with Marcelo Salas, the duo combining for 38 goals in all competitions as the capital club won the UEFA Cup Winners’ Cup.

Vieiri’s consistent goals in a number of teams saw his stock rise to new levels and in 1999 he became the most expensive footballer in history after swapping Lazio for Inter Milan.

The £32m world record deal united Vieri with Ronaldo in a forward pairing that had fans salivating at an ambitious Inter, but fitness issues meant their partnership was unable to form as hoped.

The Brazilian was then the most-feared forward in world football and it remains a huge shame that the sight of Vieri and Ronaldo working in tandem was frustratingly fleeting.

Vieri, however, enjoyed the most settled period of his career with the Nerazzurri and finished as the club’s leading scorer in five consecutive campaigns.

At his best he was an old-fashioned centre-forward, an opportunistic battering-ram who made defenders wince and worried.

His goals came in both quantity and variety, from tap-ins and towering headers to thunderous blasts from distance. The sight of Vieri swatting aside centre-backs and rising to meet crosses became a familiar one, with no Serie A forward having ever scored more headed goals than the burly Bobo.

Vieri scored 103 league goals in just 143 appearances for Inter Milan, with his finest campaign coming in 2002/03. He scored 24 goals from just 23 appearances for Héctor Cúper’s side, averaging better than a goal-per-game in a low-scoring league to win the Capocannoniere award.

That season had come off the back of a disappointing World Cup exit, in which Vieri took partial blame for the Azzurri’s early elimination. He had scored four goals during Italy’s run to the quarter-finals, but missed a glorious chance – slicing high and wide of a gaping open goal – in the nation’s controversial defeat to host nation South Korea.

It was a cruel moment for a forward who had barely missed during his World Cup career, his nine goals – at an average of a goal-per-game – a national record on football’s biggest stage, alongside Roberto Baggio and Paulo Rossi.

Four years later injuries and inconsistent form prevented him from joining the victorious Italian squad that won the World Cup in Germany, and with it earning the legend many of his contemporaries have since enjoyed.

Vieri’s career with Inter Milan came to an end in 2005, as the injury-plagued forward joined rivals AC Milan. His six seasons had delivered goals in a bucket-load, but a solitary Coppa Italia medal – earned in his final season – proved a modest return.

Despite the familiar surroundings of the San Siro he failed to rediscover his form on the opposite side of the Milan divide and his one-season club-hopping returned for the remainder of his career, taking in short stops at Monaco, Sampdoria, Fiorentina and twice more at Atalanta before retirement.

Vieri’s individual talent deserved more than the limited career honours he ultimately claimed. Unquestionably one of the finest forwards of his generation and among the best the Azzurri have produced, he was a rampaging beast at his best and a brutish menace to many a bloodied backline.