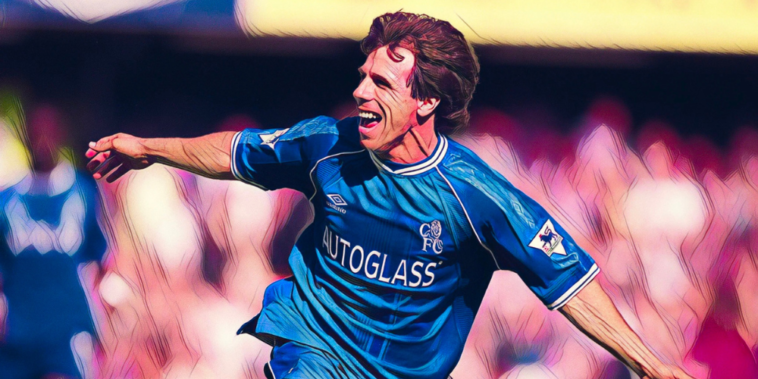 West Ham are closing in on the signing of Gianluca Scamacca, as the Hammers’ hunt for a new centre-forward appears to be heading towards its conclusion.

Scamacca broke into the Italy side last season after an impressive campaign at Sassuolo, with the 23-year-old having scored 16 league goals to finish as the second-highest scoring Italian in Serie A.

Italians have had a mixed record in England during the Premier League era, but West Ham will hope their latest signing can prove one of the more successful imports.

Ahead of Scamacca’s signing, we look at five of the best Italian forwards in Premier League history.

The prospect of Middlesbrough signing the leading goalscorer from the reigning European champions might seem the stuff of fantasy right now, but back in the nineties it was a realistic prospect for an increasingly wealthy and cosmopolitan Premier League.

With his Champions League winners’ medal still draped around his neck, Fabrizio Ravanelli departed Juventus to sign for the North East outfit for a then-club record £7m fee in 1996.

Becoming the highest-paid player in the Premier League in the process, the ‘White Feather’ began with a bang and marked his debut with a hat-trick in a thrilling 3-3 draw with Liverpool at the Riverside Stadium.

Ravanelli’s spell with the club lasted just a single season, but it was an unforgettable campaign of highs and lows both on and off the pitch.

He scored 31 goals in just 48 appearances across all competitions as Middlesbrough reached both domestic cup finals, but the club’s league form was disappointing and ended in relegation – owed in part to a points deduction received for postponing a fixture against Blackburn Rovers.

Ravanelli departed following the club’s drop into the second tier and signed for Marseille, before returning to England with Derby County in 2001. However, his 11 goals were not enough to save the Rams as he suffered a second relegation from the Premier League.

Gianluca Vialli was another leading name to leave Juventus for the Premier League in 1996, leaving the Champions League winners to sign for Chelsea.

Ruud Gullit’s appointment as manager in west London had made Chelsea an attractive destination, with Vialli leading a continental revolution at Stamford Bridge.

Despite a fall-out with the manager, his first season saw Vialli score 11 goals as Chelsea won the FA Cup to end the club’s 26-year wait for a major trophy.

He made a big impact as a @ChelseaFC player and manager pic.twitter.com/oiymVKSdM2

Vialli continued to score goals in 1997/98 – including a four-goal haul against Barnsley – despite struggling for an automatic role, before replacing Gullit at the helm to become player-manager at Stamford Bridge.

He won the UEFA Cup Winners’ Cup and the League Cup during his opening months in charge, before following those successes with a 1–0 victory over Champions League winners Real Madrid in the UEFA Super Cup.

Vialli scored 40 goals in 88 appearances for Chelsea across his three seasons, before retiring at the end of the 1998/99 campaign to concentrate on management.

Among the most popular players in Chelsea’s history, Gianfranco Zola made an extraordinary impact upon his arrival into the Premier League.

After success with Napoli and Parma, he moved to west London in a £4.5m deal in November 1996 and wasted little time in becoming a fan favourite.

Zola became the first Chelsea player to win the FWA Footballer of the Year and the first ever to have done so without playing a full season in English football, following a campaign in which he scored 12 goals to hit the ground running.

The diminutive Italian captured audiences with his box of tricks and repertoire of spectacular goals, with special efforts such as a back-heeled flick against Norwich and solo stunner against Manchester United among his most memorable.

Despite arriving aged 30, he spent seven seasons with Chelsea and scored 80 goals in 312 appearances for the club. His final season saw Zola score 16 goals to fire the Blues into the Champions League, paving the way for Roman Abramovich’s transformative takeover.

Upon his exit in 2003, he polled more than 60% of the votes to be crowned as Chelsea’s greatest ever player.

West Ham are no strangers to an Italian icon and will hope Scamacca can make a similar impact to a compatriot who remains revered in the East End of London.

Paolo Di Canio’s career in English football was a mix of controversy and captivating moments, with the fiery forward scoring 66 goals across spells with Sheffield Wednesday, West Ham and Charlton.

Di Canio signed for the former from Celtic and finished as the Owls’ leading scorer during his debut campaign with the club, but a moment of madness in which the forward pushed referee Paul Alcock to the ground after being sent off – an incident which resulted in an 11-game ban – brought a premature end to his time at Hillsborough.

West Ham gambled on his maverick talents and were rewarded with four seasons of stellar service, as Di Canio delighted crowds in the capital.

Di Canio’s influence helped West Ham to a Premier League high league position of fifth in 1999/2000, while he scored one of the division’s greatest ever goals with a spectacular scissor-kick against Wimbledon in March 2000.

He scored 51 goals in 144 appearances for the Hammers before spending a single season at Charlton, following West Ham’s relegation in 2002/03.

Fantastic and frustrating in equal measure, Balotelli remains one of the Premier League’s great enigmas.

Manchester City secured the signing of Balotelli from Inter Milan in August 2020, with Roberto Mancini reuniting with the talented but often troubled forward in the Premier League.

Balotelli’s spell in England was one of fireworks on and off the pitch, as he mixed moments of madness with magic in Manchester.

He scored 30 goals in 80 appearances across all competitions, with his finest season coming during the 2011/12 campaign as City won the Premier League title for the first time.

He scored twice in the 6-1 thrashing of Manchester United at Old Trafford and provided the assist for Sergio Aguero’s stoppage-time winner against QPR to seal the title on the final day of the season.

After falling out of favour he returned to Italy with AC Milan, where the finest form of his career persuaded Liverpool to bring Balotelli back to the Premier League.

His time on Merseyside proved a huge disappointment however, as Brendan Rodgers’ gamble on Balotelli backfired. The forward scored just one league goal for the Reds, before embarking on a nomadic career post-Anfield.

Currently in Turkish football and enjoying a renaissance with Adana Demirspor, the baffling Balotelli is still capable of outrageous moments such as this.

Over in Turkey, Mario Balotelli is enjoying himself. The rabona finish ffs 😭 pic.twitter.com/JixJD7jYZV

Not all his outrageous moments have been positive however, with few forgetting this incredible moment in a pre-season game against LA Galaxy.