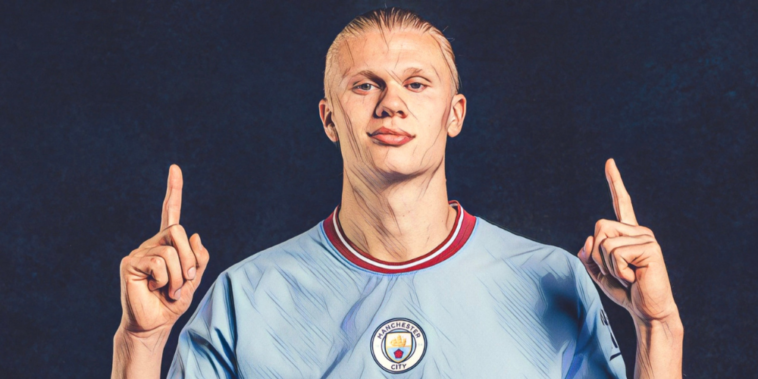 Manchester City has been told for several seasons that they need a new striker to replace Sergio Aguero, their all-time top scorer, who left for Barcelona before being forced into retirement after a diagnosis of heart arrhythmia. During his final season in 2020-21, Aguero played very little, and the last couple of seasons have seen City play without an out-and-out striker.

The club has won the Premier League twice in the last two years, plus the EFL Cup twice, and reached the final of the Champions League, where they lost to Chelsea. The Champions League odds of winning are hard for any team, but this cup seems to be the elusive competition for Pep.

The recent success of Guardiola’s teams has caused doubts as to whether they need a center-forward. Defending the ball and controlling the game is central to the manager’s game plan. This team is filled with ball players, and sometimes it can look like the former Bayern Munich and Barcelona boss is fielding a team of midfielders, including Ederson, who can play outfield very well.

City and Guardiola still have yet to win the Champions League despite their success and entertaining style of football. Guardiola is more concerned with play style than results – how well they execute the plan and play the game – but even he would acknowledge that they play that way to bring success in the first place.

One solution suggested for City’s still Champions-League-missing trophy cabinet is to get a center-forward, and there is none better than Haaland. The Norwegian is fast, powerful, strong, moves well in attacking areas, has an excellent shooting technique, and above all appears to have an eye for goal for his position. In a nutshell, when Haaland finds the space to kick the ball, he can kick it hard at the net, and more often than not, it will go in.

City will face questions about whether he fits in their team of midfielders. With his ruthless nature, single-mindedness, and strength, Haaland is often compared to a football cyborg. One thing the striker does not show is being a ball-playing forward, especially after his time at Dortmund.

Haaland is not always fit. Despite his athleticism, the forward can sometimes fall victim to the rigorous work his muscles are put through during each game, resulting in time on the sidelines. The intense physicality of the Premier League could add to this strain. However, the technical, hard-working, and tenacious nature of his new City teammates could leave Haaland with fewer jobs to do. Having less to do allows him to focus on his role and puts less physical strain on his body overall.

Manchester City hasn’t been reliant on a single player when it comes to goals, and while the golden boot winner does not seem to be within the City team any time soon, their group effort of goals was higher than any other team last season, with a record-breaking 99 shots hitting the back of the net.

Despite the lack of fancy tactics for Haaland, there will always be goals. If there aren’t, it would be shocking since he scores them everywhere he goes. In the past, he has dominated at the youth level and scored for fun while representing Red Bull Salzburg and Dortmund in the Champions League.

A single game at the 2019 U20 World Cup in Poland between Norway and Honduras saw him score nine goals, and that performance was enough to earn him the Golden Boot for the tournament. As a Dortmund player, he has scored 85 goals in 88 games and nearly always scores at least one goal per game when fit.

At first sight, it doesn’t look like Haaland fits very well into Pep’s City team, but maybe he does not need to sync up with the current system. His style of play is good for most teams as Haaland has an amazing work rate. He will always get fully involved in a game, but he may be required less in a squad so dominant. The theory surrounding Haaland is that he could make space by drawing defenders in at the same time as poaching on attacks created by his teammates.

Chelsea is another Premier League club that spent big on a striker in 2021 but has been unsuccessful in integrating him into its overall style. As much as Lukaku scores goals at Chelsea, the switch from playing in a front two at Inter to a more fluid attack has been a bit awkward for no apparent reason on his part.

The situation is different between Haaland and City, however. Guardiola and the recruitment team will already have an idea of what Haaland can do, which may simply be to score plenty of goals. His inclusion in the Champions League will be just as beneficial if he’s able to do that consistently.