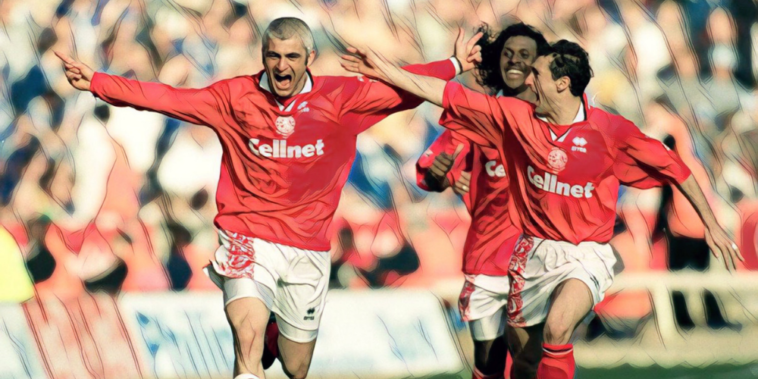 The nineties was a strange time for European football, with the emergence of the Premier League as a domestic destination of choice leading to some truly stunning transfers.

England had relaunched its top division in the early part of the nineties and, backed with increased wealth, top-flight sides looked to add a certain continental flavour to an increasingly cosmopolitan Premier League.

Perhaps few symbolised the shifting landscape of English football better than 1990s Middlesbrough, a rather unfashionable northern side who spent big in pursuit of their dreams.

Fabrizio Ravanelli’s arrival on Teeside was a transfer that stunned the sport and one unthinkable in the modern game.

The 27-year-old had finished the season as Juventus’ leading scorer and with a Champions League winners’ medal draped around his neck, but just months later was paraded at the Riverside Stadium as the Premier League’s latest marquee arrival.

Ravanelli’s career path until that point had been a rapid rise from Italian football’s lower divisions, starting with hometown side Perugia where an eye for goal quickly attracted attention.

He scored 41 goals in just 90 appearances for Perugia, before short spells with the likes of Avellino and Casertana. He moved on again to Reggiana in 1990 and a glut of goals for the second-tier side saw Juventus gamble on the services of an emerging talent.

The move to Juventus was a significant step up for Ravanelli, who having never featured in Serie A suddenly found himself sharing a dressing room with the likes of Roberto Baggio, Andreas Möller and Gianluca Vialli.

He adapted well and scored nine goals in all competitions as the Bianconeri won the UEFA Cup, before improving that haul the following season with 12 goals as he grew in stature at Italy’s biggest club.

Ravanelli had found an added gear and the chance to represent the Old Lady – the club he had supported as a child – was one he had been determined to grasp.

“It was a dream come true. I’ve always been a Juventus fan, and when I knew that they were interested in me it was like I found extra power.

“I was playing in Reggiana, I was already scoring many goals, but when they said that Juventus were looking at me, I started to do even better. I knew it was the best opportunity of my life and I did not want to waste it.”

Juventus, however, had disappointed in recent seasons and it would take an inspired 1994/95 campaign from Ravanelli to help end the club’s Scudetto drought.

The White Feather – as he became nicknamed for his silvered hair – was in sensational form as a Juventus side enjoying an embarrassment of attacking riches finished as champions.

PICK THAT ONE OUT! 💥

📅 Today's #GoalOfTheDay brought to you by a thunderbolt of a free-kick from Fabrizio Ravanelli! ⚡️⚽️#ForzaJuve pic.twitter.com/yeeEdWX34m

He hit 30 goals in all competitions to finish as the club’s leading scorer, ahead of Vialli (22), Baggio (14) and an emerging Alessandro del Piero (11). Nine of those goals came in Europe as the Bianconeri reached another UEFA Cup final, though Marcello Lippi’s side were beaten by Parma as Italian football dominated continental competition.

Juventus were far and away Serie A’s best side, however, finishing ten points clear of runners-up Lazio to win a first league title in nine years.

Ravanelli finished as Juventus’ leading scorer again the following campaign, during a memorable season in which European success arrived in Turin.

He scored home and away against Rangers in the Champions League’s group stage as Juventus cruised into the knockout rounds, though his next contribution to the scoresheet came in the final itself.

Facing holders Ajax in Rome, Ravanelli opened the scoring after 12 minutes, capitalising on a mistake from Frank de Boer before rounding the goalkeeper and squeezing in from the acutest of angles.

Jari Litmanen’s equaliser forced the final to a shootout, with the Old Lady holding their nerve to be crowned European champions.

What had been the peak of Ravanelli’s career proved his final appearance in Juventus colours, when after returning from featuring for Italy at the 1996 European Championship, he moved to England.

Swapping one of world football’s biggest clubs for Middlesbrough was a stunning shock as Ravanelli became the highest-paid player in the Premier League and the division’s third-most expensive import.

The North East was a buzz with anticipation ahead of the Premier League’s opening weekend, the £7m arrival of Ravanelli – alongside the captures of Juninho and Emerson and the recently-built Riverside Stadium – having raised optimism that Middlesbrough could challenge England’s elite.

It was a feeling that only enhanced after Ravanelli’s dream debut in his new colours.

Liverpool were the visitors to Middlesbrough on the opening day and a chaotic clash saw the two teams share six goals. Liverpool led on three occasions, but each time found themselves pegged back by the marquee man as Ravanelli helped himself to a hat-trick.

The goals continued to flow for Ravanelli who scored 31 times in all competitions for ‘Boro, adding further hat-tricks against Derby County and Hereford in the League Cup – a clash in which he netted four goals.

Bryan Robson’s side were fun but flawed and reached both domestic cup finals on the back of Ravanelli’s extraordinary efforts, but defeats to Chelsea (FA Cup) and Leicester (League Cup) extended the club’s wait for elusive major silverware.

Ravanelli had netted in the semi-final wins in both competitions, whilst he scored the opener in the latter final draw against Leicester before ‘Boro were beaten in a replay at Hillsborough.

Despite their cup exploits, Middlesbrough’s league form was disappointing and a winless run from September-December left the club in relegation territory. Ravanelli was becoming increasingly unhappy, calling on the club to improve facilities that were a far cry from Turin.

There was also divisions within the dressing room as the proverbial big fish in a small pond upset some of his less-heralded teammates. From an entourage of acquaintances that accompanied him to training, to a selfish streak that ruffled feathers, Ravanelli split opinion.

“It was like getting Messi or Ronaldo,” former Middlesbrough midfielder Craig Hignett told FourFourTwo.

“But half of the squad hated him and the other half loved him. He worked hard and he was one of the best finishers I’d seen, but as a man he rubbed people up the wrong way. He was selfish in everything he did.”

“A football spectacle at the Riverside Stadium”

On this day in 1996, Ravanelli and Juninho were at their entertaining best for @Boro… pic.twitter.com/MN5mjfL9JO

Middlesbrough’s preparations for the FA Cup final had been chaotic as a result of a fight between Ravanelli and teammate Neil Cox.

Cox had given a pre-final interview and the defender’s exclusion of the record signing – who was facing a fitness battle to reach the final – from his preferred line-up caused sensationalist newspaper headlines.

“On the Saturday, it was all over the back page: ‘Cox – Rav should miss out’,” Cox recalled.

“So while we were having the photos taken for the suits and sunglasses, he decided to spit and throw a punch. I dived in, fists flying. I wasn’t slagging him off. I was right. That’s why it got nasty. We had a scuffle.”

Middlesbrough’s season reached a new low following the deduction of three points for cancelling a game with Blackburn on short notice, as a draw with Leeds on the final day of the season – with Ravanelli absent from the side – condemned the club to relegation.

The club’s drop into the second tier saw Ravanelli move on, with English and European clubs circling for a player whose phenomenal return of goals had not been enough to preserve Premier League status.

He signed for Marseille and spent two-and-a-half productive seasons in France, before a return to Serie A and Lazio – helping the capital club to a domestic double under Sven-Göran Eriksson in 1999/2000.

Ravanelli returned to England and signed for Derby County and impressed once again, but was unable to prevent a second struggling side from slipping out of the division.

From there his career continued to wind down, eventually coming full circle to finish in Perugia, following a short spell in Scotland at Dundee.

As the new millennium progressed the fading force of Ravanelli said his farewells, one of the nineties most notorious numbers nines and a footballer whose firepower fuelled dreams in the North East.

Those who watched his brief brilliance at Middlesbrough will recall memories of chaos and quality, a lethal left foot and his iconic shirt-over-head celebration that was copied keenly in playgrounds across the country.

A superstar signing and genuine game-changer imported from one of Italian football’s giants.