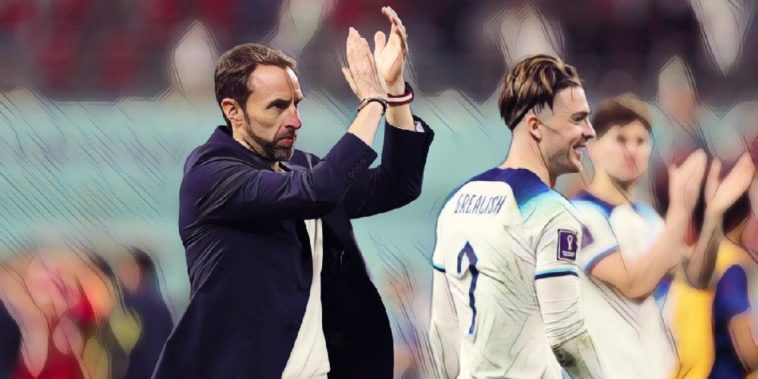 England got their World Cup campaign off to an emphatic start, racking up a convincing 6-2 win over Iran at the Khalifa International stadium.

Having reached the semi-finals four years ago, Gareth Southgate’s side dominated the ball from the off as Iran looked content to try to stifle and frustrate the favourites and hit on the counterattack through the dangerous Mehdi Taremi. The first half was, however, disrupted as first-choice Iranian goalkeeper Alireza Beiranvand was treated for a clash of heads, and despite trying to carry on, he soon had to admit defeat and be replaced.

In the 35th minute, however, England did make the breakthrough that their dominance deserved, Luke Shaw putting in a lovely first-time cross from the left that was met by Jude Bellingham who guided a superb header into the top corner for his first international goal.

That goal seemed to settle England and break Iranian hopes, and just eight minutes later, the Three Lions got a second – the much-criticised Harry Maguire nodding down a corner from the left before Bukayo Saka thrashed home a fine left-footed half-volley.

It was three as the game ticked into 14 minutes of stoppage time, the influential Bellingham picking up a loose ball in the middle of the park and driving towards goal. He laid the ball into the path of Harry Kane in the right channel, before the skipper’s drilled cross picked out Raheem Sterling who finished first-time beyond substitute ‘keeper Hossein Hosseini.

Bukayo Saka has enjoyed a fine start to the season with Arsenal, and the 21-year-old scored his second of the afternoon in the 62nd minute, picking up the ball on the right, shifting onto his favoured left before firing through a crowd of bodies.

There was a blot on the England copybook as Iran pulled a goal back through their talisman Taremi, the Porto star getting in behind Harry Maguire to get on the end of an Ali Gholizadeh reverse ball before lashing past Jordan Pickford.

However, the Three Lions quickly re-established their four-goal advantage, Marcus Rashford scoring just 49 seconds after being introduced with a composed left-footed finish inside the area.

In the 90th minute, Jude Bellingham picked out the perfectly timed run of substitute Callum Wilson, the in-form Newcastle man racing in behind the Iranian defence, before unselfishly squaring it to Jack Grealish who made it six.

In the 12th minute of second-half stoppage time, VAR would conspire to award Iran a penalty for a shirt pull by John Stones – even despite them not awarding England one in the first half for a much more obvious foul on Harry Magure – but Taremi stepped up to net his second of the afternoon with what was the very last kick of the afternoon.

Speaking after the game, Gareth Southgate admitted he was ‘a bit fed up’ at conceding late on, but said he was otherwise ‘really happy’ with his side’s performance and the result.

“I’m a bit fed up with the end of it,” he told BBC One. “To win by that margin and play the way as we did for the majority of the game we have to be really happy. We looked ready. We wanted to be that type of team.

“They dealt with game really well, there were lots of stoppages but our pressing and movement was really good. I’ve got to be really happy but we should not be conceding two goals at that stage in the game.

“We will have to be right on our game against the USA. It is a great start but we have to be better.”

Asked about England’s sloppy finish to the game, the England boss put it down to a loss of concentration and slow tempo.

“It’s a consequence of the score, we had 24 mins of added time across the game and it is a long time to focus and we just lost concentration. When we play at a slow tempo we are nowhere near as effective.”

He was however delighted with the performances of his players, and said he was particularly pleased with Jack Grealish’s late finish.

Six of the best, England have made them pay! 🏴󠁧󠁢󠁥󠁮󠁧󠁿

💻🖥📱 Reaction on @BBCiPlayer, @BBCSounds and the @BBCSport app#BBCFootball #BBCWorldCup

“We have some good players and today they really delivered. Our attacking players look a threat, our defence in the first hour controlled the game and were patient. The midfield were excellent and our forwards looked a threat. It is a great maker to put down.

“What I particularly liked was Jack Grealish’s goal with Callum Wilson on. He could have been selfish but he was thinking of the team even at that moment. I’m a miserable so-and-so. I should be more excited but I have to keep the team on the right track.”