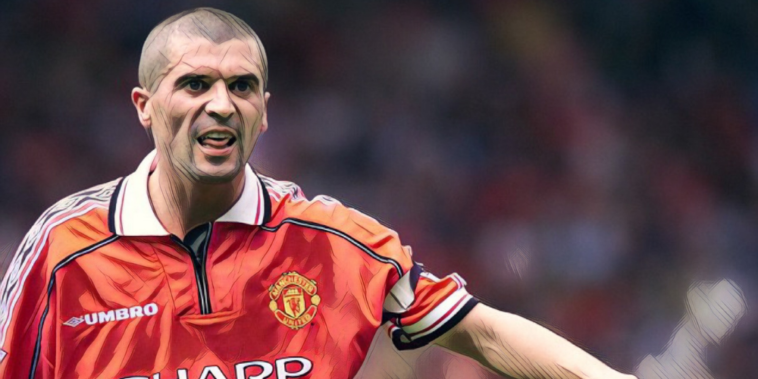 A place in the Premier League Hall of Fame is reserved for only the best according to the league’s official website, a celebration of the players who have helped shape and define England’s top division.

The Premier League was formed in the early nineties and has since developed into the most watched domestic league in world football, a whole host of stars having shone throughout its almost three decade existence.

Following the initial inductees into the newly-formed Hall of Fame, we’ve decided to look back at the initial seasons of the league and offer five nominations for inclusion.

Here are five 90s midfielders who should make the Premier League Hall of Fame.

Roy Keane is one of 23 players shortlisted to join inaugural inductees Alan Shearer and Thierry Henry, with the former Manchester United midfielder one of the defining players of his era.

Keane signed for the Red Devils in a record deal from Nottingham Forest ahead of the Premier League’s second season, developing into one of the finest players of his generation and becoming arguably the best captain the division has seen.

The Ireland international was an inspirational figure as he brought the best out of those around him, raising the standards of his teammates through tireless tenacity, his will-to-win and a ferocious temperament.

Keane demanded nothing less than the best from those around him and often proved the difference on the biggest of occasions, a snarling presence in the engine room and one of the best box-to-box players the league has witnessed.

He won seven league titles – four of which came during the nineties – amongst his 12 major honours, whilst he captained the side to a historic treble-winning season in 1998/99 and was named in the PFA Team of the Season on five occasions.

No player made more appearances than Gary Speed during the first 10 years of the Premier League, a player whose career contained remarkable consistency at the highest level.

Speed was part of the Leeds side crowned champions in the final pre-Premier League season before being named in the divisional Team of the Year the following season, the midfielder was comfortable in a variety of roles and possessed a welcomed knack of arriving into the box to score.

The Wales international was tenacious and boasted a fine left foot, leaving Leeds for Everton in 1996 before moving on to Newcastle two years later and featuring in two FA Cup finals for the Magpies.

Often understated in his role, Speed was a favourite of his teammates and a brilliant professional, his career spanning past his 40th birthday with his 535 appearances the sixth most in Premier League history.

As complete a midfielder as you would want in your side, Paul Ince’s legacy is often understated given the wealth of elite central midfielders that came following his peak.

He was, however, a brilliant footballer in a formidable Manchester United side, winning two league titles and being named in the PFA Team of the Season in three consecutive campaigns.

Ince was a player capable of influencing proceedings all over the pitch, whether it be crashing into 50/50 challenges or bursting forward into the opposition box to score goals.

His departure from the Red Devils came as a surprise as he left to join Inter Milan, moving to Italy at a time where Serie A was home to the biggest and best stars in world football.

He became a cult figure at the San Siro, though returned to the Premier League with a controversial move to Liverpool, spending two seasons with the Reds and scoring 14 goals in 65 league appearances.

Matt Le Tissier enjoys cult status in the eyes of almost every neutral Premier League fan, a footballer who often treated England’s top tier like a playground and compiled arguably the greatest highlight reel the division has seen.

Le Tissier was outrageous and audacious, capable of spectacular moments of improvised genius.

He spent his entire career at the highest level with Southampton despite overtures from bigger clubs, almost singlehandedly keeping the club in the Premier League on occasion as he delved into his top hat for his latest piece of magic.

He may never have broken sweat in a Premier League career that delivered 270 appearances and a century of goals, but that only served to endear him to the masses further as he played in his own unique and laid-back manner.

One of the finest technicians the Premier League has seen, Le Tissier was an instinctive genius and the best player to have worn the Southampton shirt.

Patrick Viera may have been yet to reach his true peak during the nineties, but he was a formidable footballer who was fast becoming the domineering general of a fine Arsenal side.

Vieira arrived as a relative unknown in the mid nineties before growing in stature with the Gunners, forming part of the team that won a domestic double during the 1997/98 campaign before lifting the World Cup with France that summer.

Vieira was physically intimidating but possessed the technical traits to match his natural gifts, the images of his long legs bounding across Premier League pitches one of the defining pictures of the era.

Rarely one to shirt a challenge or confrontation, he became an unmistakeable figure in the best Arsenal teams of the modern era across the turn of the millennium.