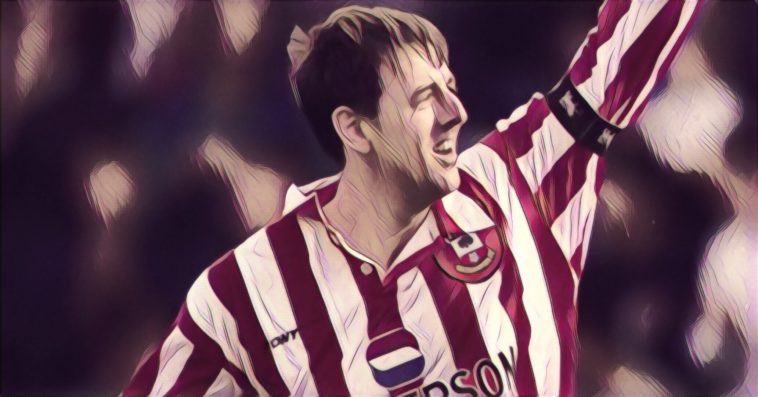 Our latest series has looked back and celebrated some top talents so far, but no feature on the Premier League’s greatest Golazo Merchants would be complete without the maverick magic of Matt Le Tissier.

The one-club icon will forever be a legendary figure on the South Coast following his sensational Southampton career, an incredible natural talent with a penchant for the spectacular and so often the Saints’ saviour in times of need.

Few players can boast a highlight reel of magical moments quite like ‘Le God’, and we’ve decided to revisit one of the most popular players of the Premier League era:

Le Tissier’s origins began off the British mainland with the precociously talented playmaker honing his talents on the channel island of Guernsey. One of three talented brothers, it was the youngest of the three who first followed his dream of becoming a footballer and soon found himself in the idyllic settings of Southampton

The youngster made his first-team debut in 1986 as a teenager in the pre-Premier League era, going on to form part of an exciting young side at The Dell that included the likes of the Wallace brothers – Rod and Danny – and a youthful Alan Shearer.

Le Tissier made an instant impression and finished his first season with ten goals in all competitions, overcoming reservations of his languid style despite an often no-nonsense approach to hard work expected by supporters at the Dell.

The dawn of the nineties saw the Southampton star named as the PFA Young Player of the Year following a breakout season that delivered 20 league goals, Le Tissier’s performances helping Chris Nicholl’s side to a lofty seventh place finish.

Equally impressive seasons followed before the birth of the Premier League ahead of the 1992/93 season, the rebranded division thrusting English football to the forefront of the game and providing Southampton’s playground footballer a grander stage on which to shine.

The first decade of what would become a sporting behemoth was lit up on frequent occasions by ‘Le Tiss’, his unwavering self-confidence, sublime technique and imaginative audacity producing a catalogue of sensational strikes.

Amongst his finest came during a clash against Newcastle in only the Premier League’s second season, a classic contest that saw Le Tissier embark on his own Goal of the Season competition.

Much of the star’s game revolved around instinct and improvisation, never more so than his opening effort of two stunning goals during a 2-1 victory at The Dell. It’s a goal that even when rewatched countless times seems implausible, did he really just do that?

A poor knock-down falls behind the midfielder who, failing to break stride, flicks the ball with his heel into his path. His second touch takes him past the first defender, before a third lifts the ball over the head of the bewildered Kevin Scott.

Many players surprised at the previous events would lash at the dropping ball to finish an incredible move, but not Le Tiss. He nonchalantly rolled the ball past Mike Hooper to finish one of the league’s greatest goals.

He was, however, far from finished there. Andy Cole’s equaliser had threatened to take the shine from Le Tissier’s ludicrously good effort, only for the star to produce another strike of equally effortless brilliance.

Just three minutes remained on the clock when a header landed in Le Tissier’s direction, who cushioned the loose ball on his thigh just outside the Newcastle penalty area. Without hesitation, he swivelled and unleashed a delightful dipping volley, which flew past the helpless Hooper to seal all three points for the Saints.

The Southampton star’s show-man style attracted plenty of attention from the division’s leading sides, though he remained loyal to the South Coast side and revelled in being the club’s main man and chief conductor.

Le Tissier failed to play by the same rules as his contemporaries and his inventiveness led to another fabulous flick and finish against Wimbledon later that same season.

Presented with a free-kick opportunity in dangerous territory, he opted for an improvised effort with pinpoint precision. Le Tissier requested the ball was rolled backwards into his path, and whilst almost stationary, flicked the ball up before volleying it over the charging Wimbledon wall and into the top corner.

It was yet another innovative piece of skill that few would attempt to try, let alone execute.

After somewhat surprisingly missing out on the Goal of the Season accolade despite his apparent one-man crusade towards the prestigious gong, Le Tissier returned the following season to claim the prize for the first time.

Eventual champions Blackburn Rovers were the victims on this occasion, the Southampton number 7 gliding past challenges with immaculate close-control dribble before lobbing England international Tim Flowers from all of 35-yards.

Southampton recognised the mercurial magic in Le Tissier’s boots was their best hope of success and their team centred around his talents in the mid-nineties, the side prepared to forgive a lack of industry from their finest talent in exchange for moments of game-winning greatness.

He scored 60 league goals over the first three seasons of the Premier League, his ability to influence proceedings in a mediocre side the main reason for Southampton maintaining their top-flight status throughout the 90s.

Tottenham and Chelsea were amongst the club’s rejected in favour of staying on the south Coast, and whilst major silverware proved elusive based on that decision, his hero status amongst the club’s supporters is an intangible part of his legacy.

For much of his career Le Tissier often treated the Premier League as his own personal playground, swaggering around pitches undeterred by either the occasion or opponent.

This delightful dink saw him embarrass arguably the division’s greatest ever goalkeeper in Peter Schmeichel, effortlessly skipping through two feeble challenges before rendering the Dane utterly irrelevant with a confident chip.

Le Tissier’s career may read no major trophies and just eight caps without scoring for England, but statistics fail to tell the story of a player who was both adored and misunderstood in equal measure.

There is arguably no player in Premier League history with a more aesthetically pleasing highlight reel than the Southampton icon, a player many regard as the greatest in the club’s history.

He scored 209 goals for the Saints in all competitions but even that fails to emphasise his influence, a player who possessed a god-given natural ability and an air of on-pitch arrogance which made him hugely endearing to the masses.

They just don’t make them like Matt Le Tissier any more, the Southampton saviour amongst the last of English football’s entertainers and arguably the division’s greatest ever Golazo Merchant – all without breaking a sweat.