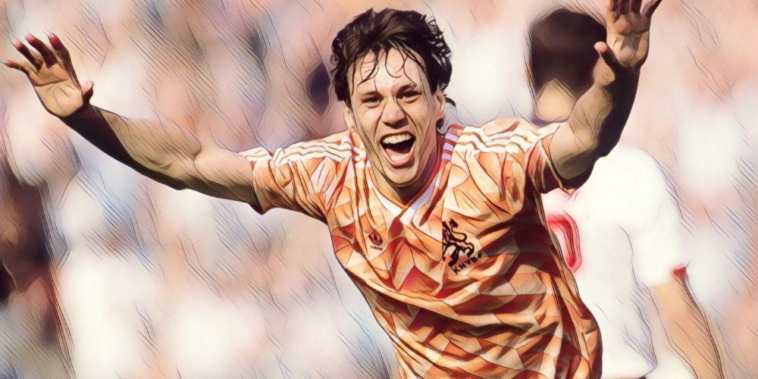 Life doesn’t tend to offer up neat pay-offs with a cherry on top so when it does they should be cherished for the rare jewels they are.

In 1988 Holland won the European Championship and they did so a generation after their revolutionary ethos of ‘Total Football’ had held planet Earth in a stupefied daze. In consecutive World Cups their vivid and uncompromising fluidity had elevated our fathers to poetry but twice they came unstuck in the final. Twice their magnificent and maverick ways had got so close.

It was fitting then that in the dug-out masterminding the long overdue Dutch triumph in ’88 was Rinus Michels, the architect of that incredible but flawed creation. The coaching genius with a flinty demeanour but the outlook of a beautiful bohemian had departed the international set-up following the heartbreak of 1974 at the hands of a brutal West Germany but returned after a decade-long sabbatical to start anew. It’s reasonable therefore to suggest that Michels seeing his singular lifelong vision finally come to fruition is the cherry on top from that memorable summer.

Perhaps, but perhaps not. Michels is too much a part of the story; too big a protagonist and looking back on Holland’s success it’s difficult to identify the sweetest aspect of it; the facet that pinches the fingers and thumb to the lips to perform a chef’s kiss.

That’s because in this series you will read about several astonishing European victories – not least what delighted us four years on when the Danes gained a late call-up and won against the odds – but nowhere in football’s rich tapestry, and very seldomly in golf, cricket, tennis or rugby, has there ever been a sporting triumph so perfect and complete; so deserved. Indeed, it felt back then like karma has intervened and righted a very significant wrong and when Holland dismantled the USSR in the final at the Olympiastadion in Munich on June 25 1988 all but a handful of the continent rejoiced; exorcised.

And it wasn’t just that style and innovation won out. That the tournament was held in Germany was also a pertinent detail with the two countries hostile to one another ever since the occupation of Holland during the war. For forty years the Dutch didn’t only want to beat their hated foe but humiliate them with a thousand flourishes of their stylish sword. For forty years they would fall upon it.

Only here, in Germany’s backyard, they prevailed and better yet downed the hosts in a famous semi-final, courtesy of a late Marco van Basten decider. It was the kind of seismic moment that lays ghosts to rest and absolutely excuses the undignified celebrations that accompanied it. On the final whistle Ronald Koeman swapped shirts with an opponent and pretended to wipe his backside with it.

When Michels took charge again of the Oranje he naturally continued the free-flowing principles he had begun but now there was a key difference. Simply put, no longer did players interchange positions so willingly but instead he ensured he had the talent who could do so if required but only within a structured framework.

So it was that Holland’s back-line was staffed by Frank Rijkaard and Ronald Koeman, defenders first and foremost who possessed attacking verve – if you really want to have your mind blown check out Koeman’s scoring numbers across his extraordinary career – while in Ruud Gullit the Dutch were blessed with a generational great who was every bit as expansive and multifaceted as Johan Cruyff.

Understandably, these players stood out – as too did a welcomed swansong from Arnold Muhren – but they were not alone in their tactical flexibility: all told, excluding goalkeepers who could probably out-perform most at the tournament if stationed in midfield, 17 of Holland’s 18 were a bit of everything and a lot of amazing.

Then there was Marco van Basten. He was only ever a centre-forward.

This is not to diminish the player nicknamed the ‘Swan of Utrecht’; far, far from it. The tall, handsome Ajax and AC Milan ledge could have undoubtedly put in an excellent shift at right-back if needed because with attributes so substantial versatility is a given.

Those attributes though were so finely attuned to artful devastation it would have been criminal to position him anywhere but at the business end, leading the line. He was lethal, scoring 277 goals in 373 appearances in the Eredivisie and Serie A. For Holland he bagged 24 in 58 starts. He also had the touch and vision of a number 10 while his movement instinctively sought out space that crucial half a second before others became aware of it. Right foot, left foot, with his head: it really made no difference to Van Basten, who was clinical to his bones but much more than that it was a deadly intent that was executed gracefully: he glided across those ultra-green pitches in Germany. Every action was balletic.

Marco van Basten was the epitome of the all-round modern centre-forward ten years before they were invented. In short, he was a total striker.

In the group stage he single-handedly destroyed England with a sensational hat-trick and in hindsight it doesn’t seem fair to have pitted him against Mark Wright and Tony Adams during his Eeyore period.

🇳🇱 Which goal was best?

Marco van Basten's hat-trick earned the Netherlands a 3-1 victory against England in Dusseldorf #OTD in 1988!

Then came his treasured winner vs West Germany while his magnificent volley in the final made the world’s best finisher at the time the tournament’s leading goal-scorer and it is that latter strike we conjure in our minds when Euro ’88 is remembered; that brief passage of play that is the closest football has ever got to utter perfection.

With Holland already a goal up courtesy of a thumping Gullit header the ball is floated over from the left, high and meandering, and Van Basten catches it sweetly so wide of the goal he is almost beyond the penalty area. He looks like Roy Race on connection: that archetypal volley the Melchester Rovers icon performed time and again on the comic’s front page. Only it’s drawn by Michelangelo.

It arced over Dasayev in nets and our fathers swooned all over again.

🗣 Ruud Gullit: “Marco van Basten was one of the best strikers the world has ever seen, a man with a natural scoring instinct.

“He could do things on one square yard of grass another player couldn’t even dream of.” pic.twitter.com/vGqmo9DFg9

Injury did for Van Basten, at the cruel age of 28 and this unquestionably was his zenith with Euro ’88 the perfect storm of his rare, glorious gifts. And perhaps the same can be said of Holland because a bruising appearance at the 2010 World Cup final has been their only high point since.

But for one blazing summer the sun was burnt orange. And Van Basten was quite simply a class apart.