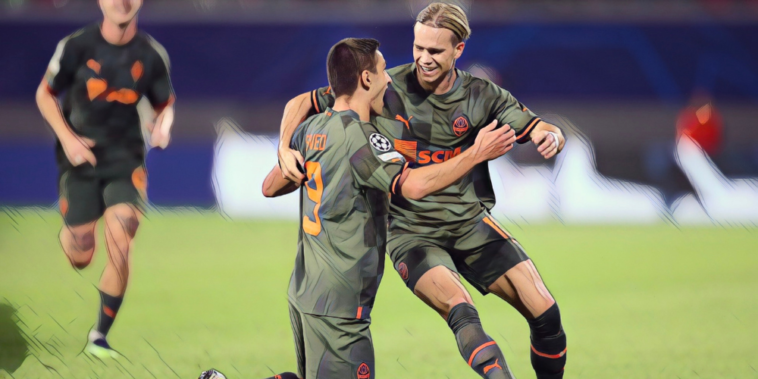 Our Champions League awards honour the best – and worst – of the midweek action.

There’s just something about clashes between Atletico Madrid and Porto that result in drama. Last season’s group stage clash between the teams saw three red cards and three stoppage time goals, as Atletico won in Portugal to secure their place in the knockout rounds.

It was more of the same this time around, as what appeared to be a goalless game exploded in the final moments. Atletico thought they’d won it after Mario Hermoso’s 91st minute goal, with the defender slamming home in stoppage time as 10-man Porto – who had Mehdi Taremi sent off – looked set for heartbreak.

Hermoso went from hero to zero in a matter of moments however, as his careless handball provided Porto with the chance to equalise from the spot. Mateus Uribe made no mistake to level the scores and seemingly rescue a point.

You won't see a more dramatic injury time than this! 🥵#UCL pic.twitter.com/HDWOKUgT0Y

There was time for one more twist in the tale, as Antoine Griezmann’s 101st minute goal – timed with just 14 seconds remaining – won it for Atletico to spark wild celebrations at the Wanda Metropolitano. It might be Matchday 1, but the Champions League’s drama-filled nights are back with a bang.

90+ – Atlético Madrid vs Porto is only the second match in UEFA Champions League history to see three goals scored in the 90th minute or later (excluding extra-time), after Porto vs Atlético Madrid in December 2021. Mayhem. pic.twitter.com/sqJE2qDWfT

The Champions League’s big names all made their mark in Matchday 1, with Robert Lewandowski, Kylian Mbappe and Erling Haaland all producing star showings. However, our Player of the Week accolade goes to a footballer who might just enjoy a breakthrough campaign this time around.

Mykhaylo Mudryk lived up to his billing as the ‘Ukrainian Neymar’ with a scintillating performance, as Shakhtar Donetsk thrashed RB Leipzig in Germany.

The 21-year-old has caught the eye of Premier League clubs and might just have gained more admirers following this showing, in which the jet-heeled winger tore Leipzig apart time and time again.

Mudryk created two goals and scored another, with Leipzig unable to cope with his explosive acceleration, whirling footwork and awareness in the final third. There was a sense of anticipation whenever Mudryk received possession, as he drove at defenders with excellent one-vs-one skills.

His price-tag will continue rising with more performances of this ilk.

Alex Grimaldo is no stranger to stunning strikes and the Benfica left-back began the Champions League season, quite literally, with a bang.

Having already created the opener for Rafa Silva in the Portuguese side’s 2-0 win over Maccabi Haifa, the Spaniard took aim from distance with truly spectacular results. There’s no saving that.

The RB Leizpig goalkeeper gifted Shakhtar Donestk their opening goal in Germany with a huge mistake, as the Hungarian dithered in possession before being disposed.

Gulasci had all the time in the world, but somehow wanted a little more.

A moment Peter Gulacsi will not want to relive 🤦

Shakhtar Donetsk are awarded the opening goal after a howler from the RB Leipzig goalkeeper ❌#UCL pic.twitter.com/p6XOuR6x1v

Ousmane Dembele is back enjoying his football once again was produced a purring performance as Barcelona thrashed Viktoria Plzeň at the Camp Nou.

The Czech champions had no answer for Dembele’s delightful dribbling and creativity, in a performance which saw the Frenchman register two assists.

The second was this wondrous scooped pass into Ferran Torres. As nonchalant as you like on club football’s biggest stage.

This pass from Ousmane Dembele to set up Ferran Torres 🤤#UCL pic.twitter.com/UATQUMrvG0

Robert Lewandowski was born to score goals. The Poland forward marked his first appearance in the Champions League for Barcelona as only he knows how, scoring a brilliant hat-trick in the club’s 5-1 win over Viktoria Plzeň.

Lewandowski’s treble took him three goals ahead of Karim Benzema and into third in the all-time goal charts, after reaching 89 goals in the competition.

He also secured his own unique piece of history, after becoming the first player to score a Champions League hat-trick for three different clubs.

3 – Robert Lewandowski is the first player to score a UEFA Champions League hat trick for three different teams (one for Borussia Dortmund, four for Bayern Munich, one for Barcelona). Collection. pic.twitter.com/UkwcqhRhr6

Jamie Carragher was scathing in his assessment of Liverpool’s defending at Napoli, as his former side were torn apart on a humiliating evening in Italy.

“It’s embarrassing, it really is. I said before, it’s kids’ stuff and this is the big problem with Liverpool right now.

“They’ve built their success on intensity on the ball, which means their opposition can’t get their head up to put the ball over. So your team is always tight and always really compact, always a risk, but you’ve got energy on the ball. That energy is not there now. So that back four has to adapt.

“If they keep playing that [high line] they are going to have a big problem, in terms of the Premier League this season and qualifying for the next round of the Champions League, because that is suicide football.”

A long list of candidates from Liverpool following the club’s 4-1 loss at Napoli, a result which equalled the Reds’ biggest ever defeat in the Champions League.

Jurgen Klopp’s side were cut apart in the opening exchanges and fortunate the scoreline read just 3-0 at the interval, with a missed penalty and goal-line clearance all that prevented Napoli from adding to the embarrassment.

Trent Alexander-Arnold’s defending is once again under the microscope, while James Milner conceded a needless penalty early on and looked every inch his 36 years on a difficult evening in Naples.

Perhaps the biggest culprit was Joe Gomez, who was given a torrid time as he struggled to deal with Victor Osimhen and Kvicha Kvaratskhelia.

A 4-1 thrashing to Napoli sees Liverpool equal their worst ever defeat in the Champions League 😬#UCL pic.twitter.com/LqQ9TrFNB0

He was robbed of possession by Osimhen in a dangerous area in a sign of things to come and was at fault for both the second and third goals with weak and passive defending.

At half-time Klopp had seen enough with Gomez replaced by Joel Matip. He, like several of his teammates, looks a shadow of his former self at present.