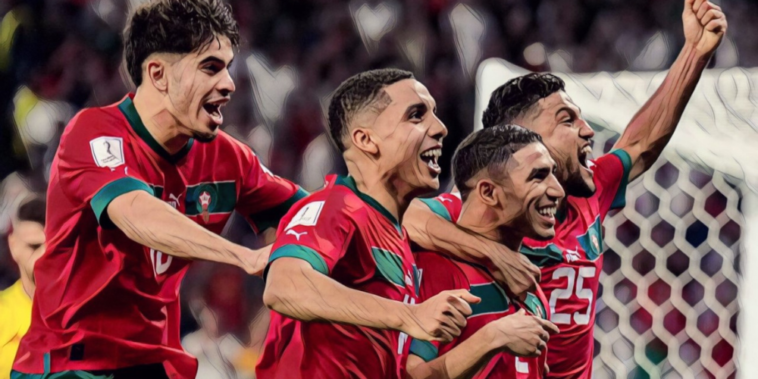 Morocco have emerged as the surprise package of the World Cup so far, after becoming the first north African team to reach the quarter-finals.

Walid Regragui’s side have upset the odds to make the last eight and are just the fourth African team to have reached this stage.

Ahead of their clash with Portugal, we appreciate the four nations from the African continent to have reached the World Cup quarter-finals.

Cameroon were the first African team to alter perceptions of the continent’s sides with a memorable run to the last eight at Italia ’90.

The Indomitable Lions topped their group after beginning the tournament with a famous win over defending champions Argentina in the opening fixture. Cameroon’s combative approach – which saw the Africans reduced to ten men for some rash challenges on the champions – unsettled their South American opponents, with François Omam-Biyik leapinh high to head home an unforgettable winner.

📅 #OnThisDay in 1990, we witnessed one of the biggest shocks in #WorldCup history 😲

The star of the Cameroon side was veteran forward Roger Milla, who had been persuaded out of international retirement ahead of the tournament. A phone call from Cameroon president Paul Biya saw Milla make his return to the side and he scored four goals during the run to the quarter-finals.

After a double to down Romania was followed with his signature celebration, he scored two more goals as Cameroon beat Colombia in the last 16. Their run came to an end against England in the last eight, as two penalties from Gary Lineker saw the Three Lions come from behind to win 3-2 in extra time.

Cameroon headed home after an unprecedented run for an African team, with Milla named as African Footballer of the Year for his performances. The award came 14 years after his previous coronation in 1974.

Senegal stunned the world in the opening fixture of the 2002 tournament in Japan and South Korea, earning a 1-0 win over world champions France in Seoul.

Papa Bouba Diop capitalised on hesitation from Fabien Barthez and Emmanuel Petit to score the decisive goal for Senegal, one which began an impressive run for the Lions of Teranga on their World Cup debut.

Draws with Denmark and Uruguay then saw Senegal top the group, before Bruno Metsu’s team edged past Sweden in extra-time in the last 16, after Henri Camara’s Golden Goal, to reach the quarter-finals.

Senegal’s run ended in extra-time in the last eight, as another Golden Goal brought their tournament to an end. Ilhan Mansiz scored the winner for fellow surprise package Turkey, who later ended the World Cup third after beating co-hosts South Korea in the third-place playoff.

Ghana came closer than any other African side to reaching the semi-finals after a shootout defeat to Uruguay in their 2010 quarter-final.

It could all have been so different for the Black Stars, who saw Asamoah Gyan blaze a penalty onto the crossbar with virtually the final kick of extra-time. The penalty had been awarded after Luis Suarez controversially hand-balled a goal-bound effort clear, with the image of the Uruguay forward celebrating Gyan’s subsequent miss from the tunnel causing outrage in Ghana.

Milovan Rajevac’s had reached the quarter-final after finishing as runners-up to Germany in Group D, before beating the United States – who had topped a group containing England – in extra-time during the last 16.

Gyan had been the hero of their run with three goals, including the extra-time winner against the USA. However, his late miss against Uruguay saw Ghana miss out on the chance to make history in South Africa.

No north African side had ever reached the World Cup’s quarter-finals before Qatar 2022, a tournament which has seen Morocco upset the odds.

Walid Regragui’s side topped a difficult looking group containing Belgium and Croatia, conceding just once in their three games to reach the knockout rounds as group winners.

The Atlas Lions had reached the knockout stages once before in 1986, but have now gone one better after a shock win against Spain in the last 16. Their resolute defence restricted the Spanish to just one shot on target during a goalless draw, before triumphing via a shootout as Luis Enrique’s side missed each of their three attempts.

Achraf Hakimi celebrating with his mother after Morocco's win against Belgium is everything ❤️🇲🇦 pic.twitter.com/GgAaM0nXl6

Achraf Hakimi has shone from full-back, while Chelsea’s Hakim Ziyech has been a key performer following his U-turn over a brief international retirement.

Next up is a quarter-final clash with Portugal and the chance to go further than any African side before them.