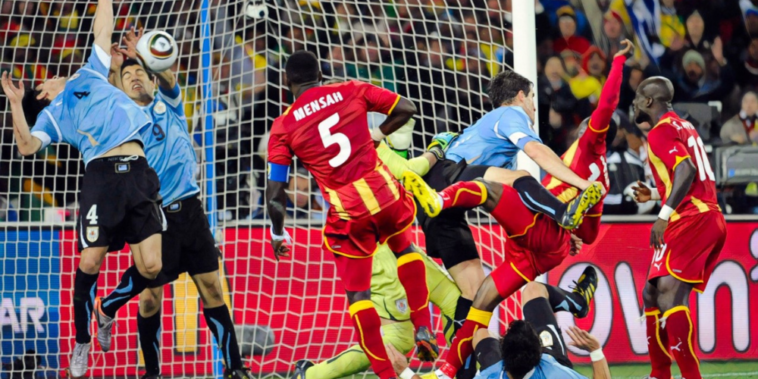 The FIFA World Cup has reached the quarter-final stage and each of the remaining eight teams will be beginning to dream about lifting the trophy.

Ahead of the last-eight ties in Qatar, we’ve looked back at five of the most memorable quarter-final games in World Cup history.

Fans weren’t exactly short changed when Austria and Switzerland went head-to-head in the 1954 quarter-finals, a fixture which remains the highest-scoring game in World Cup history.

The two teams shared a staggering 12 goals in a thrilling contest, one which became known as Hitzechlacht von Lausanne – The Hot Battle of Lausanne – due to the high temperatures which reportedly reached around 40 °C in the shade.

Host nation Switzerland were edged out after an end-to-end game, despite taking a 3-0 lead inside 20 minutes. Just eight minutes later, the Austrians were level after a quick-fire three-goal burst of their own.

The two teams traded punches in the heat and humidity of the Stade Olympique de la Pontaise, with Theodor Wagner (Austria) and Josef Hügi (Switzerland) each scoring hat-tricks for their respective sides.

It was Austria who eventually prevailed 7-5 to progress to the last four, where – perhaps fatigued from a chaotic clash in extreme heat –  they were subsequently thrashed 6-1 by West Germany in Basel.

North Korea travelled to the 1966 World Cup as rank outsiders, expectations so minimal that the team’s staff had failed to pre-book accommodation for the knockout rounds.

The Koreans were beaten comfortably by the Soviet Union in their opening fixture, before regrouping to secure shock progress after a draw with Chile and 1-0 win over two-time winners Italy.

In the quarter-finals, North Korea faced Portugal. The Portuguese boasted Eusebio among their ranks and were tournament favourites, having reached the last eight with three straight wins.

What followed was an almighty shock for Portugal, who trailed 3-0 inside the opening minutes. Pak Seung-Zin scored an opener inside the first minute, before goals from Li Dong-Woon and Yang Sung-Kook threatened a seismic upset.

Fortunately for Portugal, the brilliance of Eusebio rescued the side. He fired home a response within two minutes of North Korea’s third goal, before producing an outstanding display of goalscoring. Eusebio scored four goals to turn the game around, with Jose Torres added a fifth after he headed home from a corner.

Portugal breathed a huge sigh of relief and marched on to a semi-final meeting with hosts England.

One of the most notorious games in World Cup history, Diego Maradona brought delight and deceit to an unforgettable quarter-final meeting with England.

In one of the most infamous incidents of World Cup history, Maradona opened the scoring with a goal that later became known as the ‘Hand of God’. The diminutive Argentinan out-jumped England goalkeeper Peter Shilton and used his hand to score, with the goal given after the officials missed the offence.

England were incensed and four minutes later found themselves two goals down, as Maradona scored an individual effort which ranks as arguably the World Cup’s greatest-ever goal. Beginning inside his own half, the world’s finest footballer skipped past a succession of white shirts, leaving four defenders in his wake before rounding Shilton to score his second.

It was a moment of genius from the game’s greatest talent and a goal befitting of its ‘Goal of the Century’ tag.

Gary Lineker pulled a goal back for the Three Lions, but England bowed out of the competition with Maradona at the centre of the headlines. It was arguably the defining moment of a footballing rivalry that had been heightened by the Falklands War between the nations four years earlier.

Brazil were crowned world champions for a fourth time at USA ’94, but not before the eventual winners survived a scare against the Netherlands in the last eight.

The quarter-final burst into life after a goalless first half, with Bebeto bursting down the left and crossing for Romario to steer home an opener. Bebeto then capitalised on confusion in the Dutch defence to score Brazil’s second, with the world introduced to the iconic baby-cradling celebration featuring the goalscorer, Romario, and Mazinho.

👶 #OnThisDay in 1994 the three-men-and-a-baby celebration was born in Dallas – and in a rip-roaring quarter-final. It also involved a lavish @RomarioOnze toe-poke, a Bergkamp-led comeback and a thunderous winner from Branco 🇧🇷@CBF_Futebol | #WorldCuppic.twitter.com/zsMXcJ7DCa

Brazil’s two-goal cushion looked to have won the tie, but the Dutch fought back to level. Dennis Bergkamp reduced the deficit with a classy finish, before Aron Winter powered into the box to thump home a header from a corner kick.

Extra-time loomed at the Cotton Bowl in Dallas, but Brazil found a breakthrough. Branco – in for the suspended Leonardo – fired home a fierce free-kick from distance to keep Brazil on course for a fourth world crown.

For controversy and chaos, it’s difficult to look past Uruguay’s quarter-final clash with Ghana in 2010, a fixture which saw the birth of an unlikely footballing rivalry.

Ghana were looking to become the first African team to reach the semi-finals, in the first tournament staged on their home continent. Sulley Muntari had opened the scoring for the Black Stars, but Diego Forlan’s free-kick levelled the scores and forced extra time.

Ghana looked set to reach the last four after being awarded a penalty in the final seconds of extra time, after Luis Suarez handballed a goal-bound effort on the line. Whether Suarez’s instinctive palm of the ball was commendable self-sacrifice or unsportsmanlike conduct has remained a source of contention ever since…

Asamoah Gyan missed the spot-kick after hitting his effort against the bar, with Suarez pictured gleefully celebrating his miscue from the tunnel. Uruguay went on to win the subsequent shootout 4-2 and reach the semi-finals for the first time since 1970.

Ghana, more than a decade on, have not forgiven Suarez an unrepentant for his sins.

Read – Remembering every World Cup meeting between the Netherlands and Argentina