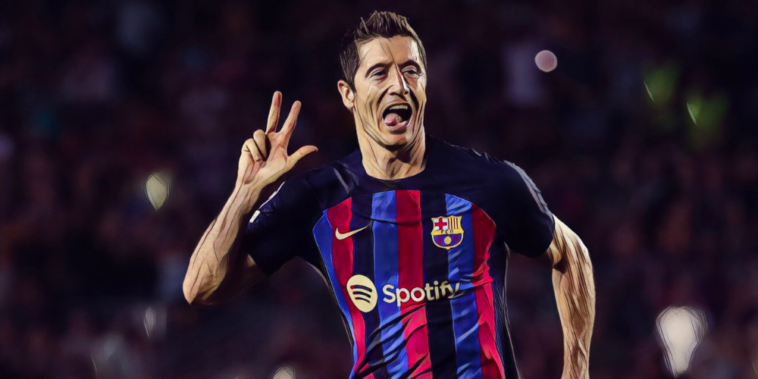 The UEFA Champions League is back and we’ve delved through the European action to compile our Team of the Week from Matchday 1.

It was a mixed start for the Premier League clubs, with two wins and two losses for the four English sides. Manchester City and Tottenham began their campaigns with impressive wins, but there was misery for Chelsea and Liverpool who sunk to disappointing defeats.

There was also a harsh return to this stage for Celtic and Rangers, each of whom found themselves on the wrong end of emphatic results.

Courtois’ calm was crucial as Real Madrid weathered an early storm at Celtic, holding firm during a chaotic opening period before the champion’s class shone through in Glasgow.

The Belgian made four saves, three of which came from inside the box, and was a dominant presence aerially as he relieved pressure with high claims. He has remarkably now saved 19 of the last 20 shots on target he has faced in the Champions League.

A first clean sheet of the season for Courtois, who will be key to Real Madrid’s hopes of defending their crown.

Cancelo was a constant threat going forward as Manchester City sent out a statement with a 4-0 thrashing of Sevilla. In at right-back, he represented an additional winger for much of the game as he charged forward to link-up with the impressive Phil Foden.

The Portugal international ended the game with 105 touches, 100% of his tackles won and two assists. He teed up Foden for his goal after a neat one-two, before a perfect low cross was turned home by Ruben Dias for City’s fourth.

On either flank, Cancelo continues to set the standard for forward-thinking full-backs.

An outstanding performance from the teenager on his Champions League debut, Sylla followed up an impressive display in the Brugge derby last weekend with a stand-out showing in Europe.

The 19-year-old made 11 ball recoveries, won five duels and made four clearances as Club Brugge upset Bayer Leverkusen to begin the group stage with a win.

Sylla also scored the game’s only goal after meeting Andreas Skov Olsen’s in-swinging corner to glance home at the near post, ending a fine week with a man-of-the-match performance on club football’s biggest stage.

Only 19 years old and already Player of the Match in the Champions League: Abakar Sylla! 👏🏻🤩 #CLUB04 #UCL pic.twitter.com/uzCAOWFvwW

The centre-back recorded an impressive pass accuracy of 88% and has already been backed to follow Odilon Kossounou – coincidentally in the beaten Leverkusen team – in leaving Brugge for a major European league and winning full international honours with the Ivory Coast.

Dinamo Zagreb secured arguably the upset of Matchday 1, beating 2021 winners Chelsea. The Croatian champions had won just five of 43 games in the Champions League before their clash with Chelsea, but produced a stubborn defensive performance after Mislav Orsic’s brilliant individual opener.

Key to the Croatian’s resistance was Dino Peric, who formed part of a back three that frustrated Chelsea in Zagreb. The 28-year-old made nine clearances and five blocks, in addition to winning each of his tackles and 5/6 of his ground duels.

Up against the threat of Raheem Sterling and debutant Pierre-Emerick Aubameyang, this was a solid showing from Peric as Dinamo proved to be no pushovers this time around.

Benfica reached the quarter-finals last season and began the new campaign with three points, securing a 2-0 win over Maccabi Haifa.

Alex Grimaldo – linked with Manchester City during the summer – enhanced his reputation as one of the best attacking full-backs outside Europe’s top five leagues as he scored one and created another in Lisbon.

The Spaniard’s inviting cross was steered home by Rafa Silva for the opener, before Grimaldo added another stunning strike to his increasing collection with a delightful dipping effort from distance.

Napoli produced a near-perfect performance to thrash Liverpool on Matchday 1, running riot across the opening exchanges at the Diego Armando Maradona Stadium.

Liverpool could not live with the intensity and industry of Napoli’s midfield, with former Fulham star Zambo Anguissa in swaggering mood for the home side. The Cameroon international was in brilliant form in an all-action performance that saw him win 11 duels, make 13 ball recoveries, seven tackles and complete 100% of his attempted take-ons.

Some sharp turns and fancy footwork underlined his confidence on a fantastic Champions League debut, while his performance got the goal it deserved as he exchanged passes with Piotr Zielinski on the edge of the area before firing past Alisson.

André-Frank Zambo Anguissa, that is superb! 👏

Napoli are all over Liverpool in the first half! #UCL pic.twitter.com/Vaf5CPQIss

Liverpool were poor no doubt, but few will fancy the trip to Naples on the evidence of this performance.

The orchestrator of Napoli’s big win over Liverpool, Zielinski was at the heart of the Italian’s ruthless performance.

Jurgen Klopp talked up the quality of the Poland international pre-match and he delivered with a masterclass in midfield, scoring twice and creating another as Napoli earned a huge win.

Zielinski opened the scoring from the spot, before a sharp one-two with Zambo Anguissa sent the Cameroonian in on goal to score the second. He netted the fourth just two minutes into the second half, turning in at the second attempt to put Napoli in cruise control.

🇵🇱 Piotr Zielinski has been involved in seven goals in his six games so far this season for Napoli in all competitions.

Once heavily linked with a move to Liverpool, he was a cut above the Reds midfield on a fine night for Luciano Spalletti’s side in Naples.

What a difference nine months can make. Barcelona attempted for force out Ousmane Dembele during the January transfer window, with PSG and Chelsea interested in a deal for the winger as his contract ran down in Catalonia.

After refusing to depart, he was electric over the second half of the season for Barcelona to lead the league for assists despite starting just 15 games. Dembele signed a new deal in the summer and has continued in the same vein, including an outstanding performance to torment Czech champions Viktoria Plzeň at the Camp Nou.

Dembele made six key passes and provided two audacious assists as Barcelona won 5-1 in Matchday 1, with the visitors failing to cope with the Frenchman’s explosive speed and skill.

Put in another incredible performance. 🤩 pic.twitter.com/4QenJdtuFV

Xavi was full of praise for the 25-year-old post-match, with Dembele – on current form – among the finest wingers in world football.

“I’m more than happy for Ousmane Dembélé,” Xavi said, as per Fabrizio Romano. “He’s at the same level as the best Neymar when the Brazilian was here at Barça. Trust me, he’s an incredible player”.

Mykhaylo Mudryk was the subject of transfer interest during the summer window, with Arsenal, Everton and Brentford among the Premier League clubs interested in the Shakhtar starlet.

That queue might just have increased following a brilliant Champions League performance this week, as the 21-year-old tore RB Leipzig apart in Germany.

Mudryk scored one and created two others as Shakhtar stunned the Bundesliga side, with the winger’s explosive pace and razor-sharp footwork causing countless problems for Leipzig.

There was an impressive maturity to his game in the final third as he picked out precise passes, while his goal was a fine finish on his weaker side as he lashed home confidently into the far corner. Europe’s elite might just be on alert.

Barcelona secured the signing of Robert Lewandowski during the summer in a bid to return as competitors on the Champions League stage.

Lewandowski wasted no time in making his mark in the competition for Barca, with a brilliant hat-trick on Matchday 1 as the Catalans thrashed Viktoria Plzeň.

It’s now 108 goal involvements in 107 games in the Champions League for Lewandowski, who on 89 goals moves clear in third in the all-time charts as he closes in on joining Cristiano Ronaldo and Lionel Messi in the competition’s 100 club.

Robert Lewandowski is the first player to score a hat-trick at three different teams in the Champions League 👑 pic.twitter.com/PLZNeh8fpF

Tougher tests than the Czech side await for Barcelona, but in Lewandowski the club have a centre-forward capable of dragging the side to new heights.

Paris Saint-Germain’s superstar trio combined to get the club’s Champions League campaign underway this week, continuing an explosive start to the season during a 2-1 win over Juventus.

Kylian Mbappe struck both goals for PSG at the Parc des Princes, with each fantastic finishes. His first came after a one-two with Neymar that saw the latter scoop a lofted ball into Mbappe’s path, with the Frenchman making no mistake to lash a volley past Mattia Perin.

Mbappe struck a superb second after a venomous hit from Achraf Hakimi’s cut-back. It’s now 35 goal involvements already this season for PSG’s star trio with Mbappe (9G), Messi (4G / 6A) and Neymar (9G / 7A) starting the campaign in spectacular form.

Capable of blowing teams apart when on song, the test will come in the latter stages as Christophe Galtier looks to become the coach to find balance with the brilliance.