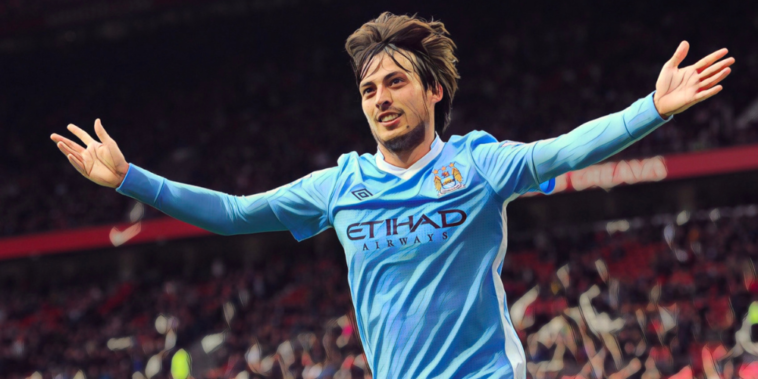 The precise date of the phenomenon is unknown but almost certainly the opposition was Aston Villa and for sure it was late autumn going on for winter. Late in a game, the floodlights were on, and the air was chilly.

We are two years or so into the reign of David Josue Jimenez Silva, otherwise known as ‘Merlin’, otherwise known as ‘El Mago’, and at a packed-out Etihad – yes, really – he receives the ball and pirouettes on a peseta, in doing so effortlessly unshackling himself from a man-marker. We are used to seeing this, ‘we’ being the City faithful, who adore the little maestro with all of our hearts; who call him not ‘Merlin’ or ‘El Mago’ but instead, ‘Spanish Dave’.

Our heartbeats quicken but we remain seated for now.

While Spanish Dave spins, the ball never less than a caress from his boot, Sergio Aguero electrifies into life and peels into a channel where there is space. He knows what is coming and when. The deceptively simple, sumptuous pass. The pass of such accuracy and weight it evokes slide rules and carpet slippers. The forward has feasted on this Silva service for a season and a half. Or perhaps a season and a quarter. As stated, the precise date of what occurred on that floodlit, chilly afternoon is unknown.

And then the pass is duly delivered, only it’s overhit. It traverses the path intended for it but it’s bobbly and awkward, seemingly picking up pace as it approaches the touchline. And then the ball thumps against an advertising hoarding behind the goal and Sergio Aguero is all of us in that moment because he doesn’t know what to do, or how to respond.

A decade on and I can still hear that thump, a faint noise heard from afar because the stadium is reduced to stunned silence, the kind of silence you might hear at a circus or show when something goes seriously awry but you’re not sure if it’s part of the act.

There was a couple of seconds of this silence, as we waited for the punchline, waited for the other foot to fall, because what we had witnessed couldn’t be ‘it’. There had to be more.

But there wasn’t. On an otherwise nondescript autumnal day, against a team already well-beaten – not that it matters – David Silva mishit a pass.

He was perceived to be a luxury player on signing for Manchester City from Valencia in 2010. An elegant trequartista forever scheming, or perhaps a wide creative, not a winger as such, but a player whose artistry would be best served away from the hurly-burly of an English centre-circle.

Yet in the event, this fragile-looking talent with a floppy fringe revolutionised our game for the better from within. He changed us, evolved us. This miniature Harlem Globetrotter with panoramic vision made us see.

For while the Premier League was a far more sophisticated beast a decade ago to a decade before, embracing ball-playing centre-backs and false nines; and realising long before Pep Guardiola arrived that goalkeepers actually had feet, we retained one stubborn prejudice, believing our engine-rooms were exclusively for energy and endeavour; fortitude and fight. It was for the Keanes and the Inces and the Gerrards, and even those with a bit more about them such as Patrick Vieira had to be impossibly rangy and athletic, pugnacious if required.

Then along came Silva, slight of frame, whose velvet touch and supernatural control made a mockery of snide challenges, and by inhabiting the half-spaces, and bewitching and bedevilling, figuratively brought ballet to the inner cities. He made our centre-circles beautiful.

It is impossible to over-state his influence in this regard. These days, a midfield staffed by ball-winners is considered archaic and guileless, a throwback to a darker age. Where is the imagination? Where is the skill? Even two holders and a number ten is viewed with negativity. It was Silva who did this. Spanish Dave.

But of course, there was so much more too. Across ten glorious years on our shores he normalised perfection, achieving a consistency of excellence that is hard, even in hindsight, to fully make sense of. The ball stuck to him like glue. His movement, though swishy and floaty, was sharp and clever; always a second ahead in thought to whoever was unfortunate enough to be nearest to him. His distribution was out of this world.

It all amounted to weekly masterclasses from a master craftsman, an imperious exhibition of poised, brilliant football pared down to its simplest form that was instrumental and inspirational. At times he was so good that at the highest possible level this sport can offer, he looked like a ringer. At times it just wasn’t fair to have him.

I had the enormous privilege of watching this rare technician, this gift from the gods, for a quarter of my life. And I will never love a footballer more.

When the silence was broken it was by a sound quite unlike anything heard at a game before or since. Some of us gasped. Others laughed at the absurdity of it all. There were murmurs and mumbles, peppered by expletives because that’s what people do when shocked to their core, they swear.

“He is mortal then,” a man spoke up nearby, his broad Mancunian accent failing to hide a trace of relief in his inflection, and I understood that relief then, as I do now. Because to err made him human. It made him one of us. And that made all of what he did so very much more extraordinary.