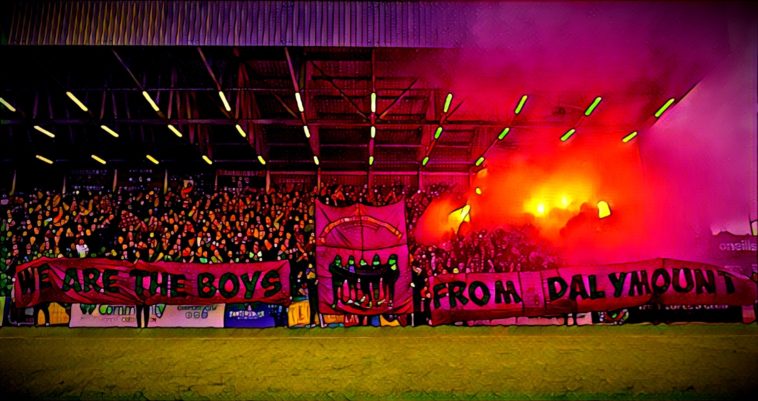 Bohemians defeated Shamrock Rovers in yet another intense and entertaining Dublin Derby.

The flares were out in full force in both ends, but no one needed saving from this, the fiercest of rivalries on this island and quickly gaining a reputation beyond these shores. If anything it symbolised the searing heat between these two fanbases, the raging hatred coursing through their veins, manifesting itself with any number of expletives and hand gestures on the terraces.

Then it happened. Again.

Bohemians defeated Shamrock Rovers for the third straight time this season in the SSE Airtricity Premier Division. Daniel Mandroiu scored from the penalty spot in the first-half after missing one earlier in the game, before Dann Carr equalised with a lovely little dink in the second-half.

That boy Mandroiu was the difference maker, however, stunning the Dalymount faithful with an incredible 25-yard strike right in front of the away crowd. The 2-1 win means both sides remain in second and third place respectively, with Bohs reducing the deficit down to seven points.

But more importantly for them, they beat the Shams.

For those who have not kept count: that makes it seven wins out of the last eight games for Bohemians against Shamrock Rovers. Over two years and 720 minutes of action (not counting the 12(!) minutes of injury time last night) since the Hoops last had a win over their most hated rivals.

You would think that facing every team an extra time each season, which was brought in last year, would give Rovers more opportunities to actually beat Bohs, but apparently they are destined to keep tripping up at the sight of red and black. On this occasion they gave away two needless penalties in the first half alone.

The Tallaght outfit have all the makings of a top team: a rock solid centre-back partnership, excellent full-backs, one of the strongest midfields in the country and a potent attack to boot. Not to mention the fact that they have strength in depth in some key areas, a rarity in this league.

But for whatever reason, they have a mental block when it comes to that lot on the northside and it’s killing their title prospects. It’s like not being able to get past a level in a video game, except it’s not even the boss you’re up against yet and it feels like you’re never going to complete this game.

Danny Mandroiu is too good for this league

It’s a little over a month ago since I wrote that one Daniel Mandroiu was “particularly disappointing” in Bohemian’s 2-0 defeat to Dundalk at Dalymount Park. The playmaker’s passing was off, his decision-making was terrible and opposition players were running by as if he wasn’t even there.

The very next week the former Brighton player curled a free-kick into the top corner of the net to salvage a point for his side and banish any memories of that insipid performance. Fast forward another few weeks and he is the toast of the league.

Mandroiu is very much a mercurial talent, one that manager Keith Long has admitted he finds “frustrating” at times, but there are few players in this country who possess the quality he does. His 59th minute thunderbastard of a strike added one more piece of evidence to that argument.

What a goal from Danny Mandroiu to put the home side back in the lead.

I’m pretty sure if that ball had not have hit the back of the net then it would still be hurtling through the sky right now, such was the speed at which it left his foot. But it wasn’t just that wonder goal that illustrated his brilliance. It was the way he dictated play for Bohs, the attacks flowing through him. It was the way he was a major headache for the Rovers defence. And it was his in his attitude as well.

The Dubliner could have easily turned down the chance to take the second penalty, after he had missed the first just moments earlier in the first half. But he took the responsibility upon himself again, coolly slotting home to send Alan Mannus the wrong way.

The only problem for Bohs is that now the cat is out of the bag. Mandroiu is (at least) a step above this league and will surely get a move to a bigger club at some point. He couldn’t make the breakthrough with the Seagulls, and it sure would be a shame to see him go to a lower league outfit in England, where they could very well incorrectly utilise his skillset. Wherever he does end up, the club can at least breathe easy knowing they recently tied him down to an extra year just last month.

James Talbot could be the signing of the season

Bohemians sent out a makeshift defence on Friday night, with three of their regular back four missing for duty. Despite this depletion, they only conceded one goal and came out on the right side of the result.

Aside from Danny Mandroiu and his goalscoring exploits, Bohs have one man to thank for the victory: James Talbot. Shamrock Rovers had several opportunities to carve them open like a Thanksgiving dinner, but time and time again, the home side’s goalkeeper came to the rescue.

Talbot made a number of important saves throughout the match, but the most crucial ones came within minutes of each other in the opening half. In the 35th minute Aaron Greene’s shot across the goal was saved, but Talbot couldn’t hold on and was forced to react quickly to the incoming Dylan Watts. Moments later ex-Bohs man Watts hit a splendid long-range effort, but Talbot was once again equal to it.

James Talbot pulls off another excellent save to deny Dylan Watts!

The ex-Sunderland goalie has turned out to be a gem of a find from Keith Long, who has a knack of unearthing quality players seemingly out of nowhere. Talbot may be one of his best, and possibly the signing of the season.

Rovers have a Dann fine player in Carr

The likes of Jack Byrne, Dylan Watts and Roberto Lopes have all received high praise at one point or another this season, and rightfully so; they have put in some great performances to help Shamrock Rovers challenge for top spot. But a lesser heralded name put in a hell of a shift on Friday.

Dann Carr was arguably the Hoops’ best player on the night, knitting attacking plays together, whipping in crosses and scoring a lovely goal to top it all off.

An excellent ball from Ronan Finn to Dan Carr to slots it home for Shamrock Rovers.

Unfortunately for the Londoner, there was nobody with a ruthless streak to finish off his attempted assists, but he can take heart from his performance. Perhaps his best pass came in the first-half, when a nice through ball released Aaron Greene for the aforementioned shot that resulted in a double save.

The ex-Dulwich Hamlet player was playing more centrally on this occasion, as opposed to the left wing position he has been more accustomed to this season. The change seemed to work a treat, as he was in his element. Carr has a bit of everything; strength, good footwork, game intelligence and a bit of speed. If he can add a few more goals to his overall game, then he would be the perfect attacking midfielder.

Do Rovers need a new striker?

Following the final whistle Rovers manager Stephen Bradley suggested that his team were “naive in the final third”, referring to the amount of good chances his attackers spurned at Dalymount Park. Shane Supple and Johnny McDonnell, on punditry duty for Eir Sport, suggested that the club need to buy a striker who can get them “20 goals a season”.

Easier said than done. Everyone wants one of those, but where can they be gotten on the cheap? Romeo Parkes is doing quite well for Sligo Rovers, who could be tempted to sell if a decent offer came in, but he’s only scored six goals in the current campaign. He would add something to this Rovers forward line, but would he fit the above description?

Beyond that, are there any other strikers who fit the bill and at clubs willing to sell? Very unlikely, which means they’ll have to look elsewhere and bring in a free agent, which is far from ideal so deep into the season.

In some ways it looks like a luxury problem for Rovers. They are the second highest scorers in the league with 33 goals in 21 games, with goalscorers all over the pitch. 13 different players have chipped in thus far, seven of which have scored three or more. And as evidenced by Friday, they have no problem creating chances in front of goal.

Yet there is still a feeling they need a hotshot up top who will bury the half chances when they arrive and kill the opposition dead in their tracks, something Rovers have struggled with in recent months. Aaron Greene, who’s scored five league goals, is an upgrade on Gary Shaw from last year, but he’s not the lethal marksman they need to mount a serious title challenge.

See Also: The best League of Ireland exports to the Premier League