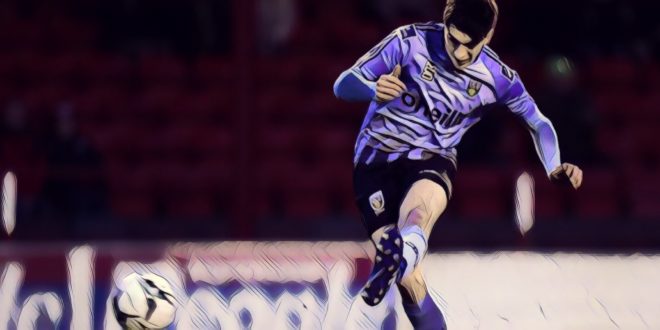 As the season ends in England, the League of Ireland is just getting into the swing of things. That means scouts from across the water have even more time to admire the talents we see every week.

The quality of players improves every year and 2019 is no different. So we’ve decided to take a look at the stand out performers who are sure to catch the eyes of the interested onlookers from across the water.

In his second spell with the Inchicore side, the 20-year old has made ten appearances so far this season, establishing himself at centre back. Kelly returned to St.Pats after a successful spell with Drogheda where he played every game in their push for promotion from the First Division. His Premier Division career has started brightly too and his Man of the Match performance against UCD last month certainly proved that.

The young defender is a rare breed in the league as he is solely focusing on football with no college or job to distract him. With this factor and time on his side, Kelly looks certain to have a bright future wherever his football takes him.

The Blackrock College Leaving Cert student has looked well beyond his years when he steps onto the pitch for Bohs. At only 18-years-old, he has already had a taste of football in England after a trial with Wolves at the end of last year. Lyons could follow the footsteps of former Gypsies full back, Matt Doherty, who has thrived for the Premier League club. Adding to Uefa Youth League appearances, Lyons is also an Irish u-19 international and was part of the team who qualified for the European Championships this summer.

Congratulations to #Bohs U19 captain Andy Lyons – SSE Airtricity U19 Player of the Year 2018. ?⚫️?? pic.twitter.com/tdrzfIRiAF

Dubbed the ‘Irish Messi’ by Pat Dolan, O’Connor has certainly lit up a few Friday nights so far this season. Ireland manager, Mick McCarthty, was impressed with the winger as he watched him fly down the flanks against St.Pats in the opening game of the season.

The former UCD man already has experience with international set ups having made 12 appearances for the Irish College & Universities team along with three caps for the u-19s. At 21-years-old, O’Connor has plenty of opportunity to live up to his nickname and help Cork kick start their season.

Mick McCarthy – “I went to watch the first game, Pat's & Cork City. Daire O'Connor, he was the one player who stood out for me, he played very well. Whether it was on the right or on the left, he went and played in behind the striker. He was the one that stood out.”#LOI #CCFC84 pic.twitter.com/mHZOcDZ8al

PFAI Young Player of the Year for 2018, McGrath has only improved this year as a key figure in Dundalk’s return to form. The playmaker featured 30 times in last season’s league winning campaign and his performances this year suggest another medal could be on the way.

Meath native, McGrath is only 22-years-old but he already has a wealth of experience having made his senior debut for St.Pats in 2014. With his former manager, Stephen Kenny, now in charge of the Ireland u-21 squad, McGrath will be hoping to add to his experience at international level having been called up in September.

A match winning performance against Waterford really made people stand up and take notice of the Harps midfielder. As a former Derry City player, the 21-year-old may feel he had a point to prove at his former sides bitter rivals. A goal against his previous employer in April was certainly relished by the young player. Following a stellar season in the First Division which produced nine goals in 15 games, Place will be hoping his talent can help Harps climb away from trouble.

Signed from Derry City in the off season, McEneff hit the ground running for his new side as they set the early pace. Giving a glimpse of things to come, the 23-year-olds first goal for Rovers came from a Panenka penalty against his former side. This was followed by another match winning penalty against Dublin rivals, St. Pats and a mouth-watering display against Cork City. McEneff was unplayable that night in Turners Cross and his two goal, man of the match, performance lit up a dreary Irish night.

Having spent time in Tottenhams youth ranks and being capped at numerous Northern Ireland underage levels, he certainly doesn’t lack experience which could help his team win a first title for eight years.

A move to full-time football has been relished by the midfielder as he puts his mark on the Premier Division. Sloggett was a key player last season as his UCD side won the First Division title and made the semi-finals of the FAI Cup. The 22-year-old has added some much needed bite to Declan Devine’s team and grabbed his first goal against his former side. Leaving a full time job in Dublin was a move that has benefitted both the player and his new employers.

This is always a difficult time of the season for the Students as exam season kicks in and their early season form has dwindled. However, a bright spark among all this is Irish u-21 international Farrugia who had Stephen Kenny lavishing him with praise recently.

Having only just turned 20, he is already attracting attention from England with a trial at Premier League champions, Man City under his belt. Preston are also interested in the young star who chose Ireland over Malta, France and Spain which is a big plus for our international future.

A brace from Adam Idah and a fantastic finish from Neil Farrugia sealed an opening victory against Luxembourg in front of 4,772 at @tallaghtstadium!

All the goals! ? ? #COYBIG pic.twitter.com/ujD1iWXRll

The recent ‘Battle of the Rovers’ was decided by a moment of pure magic from Donegal man Keaney; 35 yards out, top corner, no bother for the 20-year-old who provoked the ire of the Shamrock faithful. A recent call up to the Irish u-21 side was followed by excellent performances that include another stunning free kick to claim an away point against the champions, Dundalk.

One of Waterford’s first signings for the 2019 season, Elbouzedi has got his career back on track at the RSC with some entertaining displays. After a debut for the Ireland u-21 team against Luxembourg in March, April brought a player of the Month nomination for the former West Brom midfielder. His father’s country of birth, Libya, have asked about his availability but it looks like he won’t be following Eamon Zayed’s trail, which is good news for Ireland.