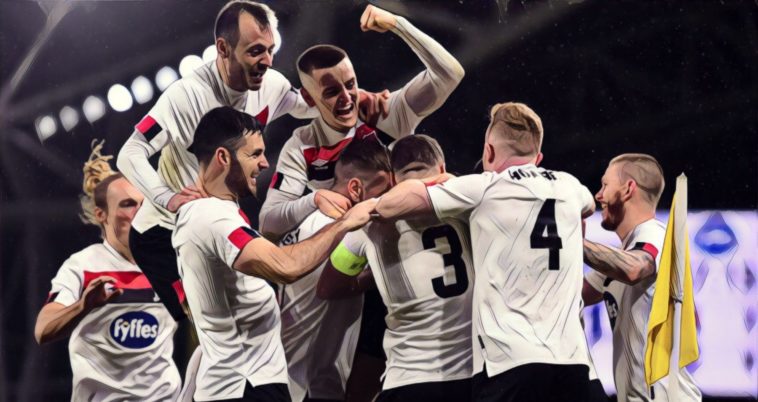 Arsenal will face League of Ireland opposition for the first time ever in a competitive fixture, but who are their Europa League opponents Dundalk FC? And how did they get to this point?

Based in County Louth in the Republic of Ireland, Dundalk have been in existence for 117 years, having been established in September 1903. They play their home games in Oriel Park, although the much maligned ground will not be deemed worthy enough for European competition by Uefa.

The Lilywhites will play their group matches at the Aviva Stadium in Dublin, although they played at Tallaght Stadium – home of rivals Shamrock Rovers – the last time they reached this stage of the competition.

Only Rovers have won more major honours than Dundalk, who have won 34 trophies during their existence. The club enjoyed a highly successful era from 1975 to 1995 when they won six league titles and several cups. It was during this period that they embarked on a run to the last 16 of the European Cup.

In 1979 they were drawn with Linfield, a Northern Irish outfit with Unionist links, in the preliminary round and the first leg clash was marred by scenes of violence in an event that came to be known as The Battle of Oriel Park. 300 police officers were present, but that did nothing to quell the vitriol that night, with 100 people suffering injuries. Dundalk captain Dermot Keely described it as “like playing football in the middle of a street riot.”

The match ended 1-1, but it was decided the second leg could not possibly take place in Belfast, so it was moved to Haarlem in the Netherlands. Dundalk won 2-0 to progress to the first round proper, where they defeated Maltese side Hibernians 2-1 on aggregate.

In the round of 16, they were drawn with Celtic, one of the biggest European matches in Irish football history at the time. They ran the Scottish side close, losing the first leg 3-2 at Celtic Park before a goalless draw at Oriel. Tommy McConville missed a glorious chance to put them into the quarter-finals, where they would have faced Real Madrid.

The success continued until the mid-nineties, but a period of mediocrity soon set in that saw them relegated in 1999. Aside from a shock FAI Cup win in 2001, their trophy cupboard remained largely bare for almost two decades. They went on a 19-game winless run between 2002 and 2003 that typified how far they had fallen.

In 2006 Dundalk thought they had won back promotion to the Premier Division when they beat Waterford United in a promotion playoff, but the FAI – who had just taken over running of the league ahead of the following season – laid out new criteria for which teams would compete in the top tier.

Third-placed Galway United were promoted ahead of second-placed Dundalk, a decision that unsurprisingly angered everyone involved with the club. One fan, Mark ‘Maxi’ Kavanagh, went to the association’s headquarters in Dublin and doused himself in petrol and threatened to set himself on fire in protest.

Dundalk spent seven straight seasons in the First Division before finally earning promotion and enjoying a few years of stability. They suffered an appalling campaign in 2012, however, and were only saved from automatic relegation by Monaghan United’s withdrawal from the league. They defeated Waterford in a playoff to stay up, but their woes didn’t end there.

The club were a basket case financially and needed a ‘Save Our Club’ appeal from the fans, which included bucket collections and supermarket bag packings, to keep them afloat. Local businessmen Alan Connolly and Paul Brown stepped in to take over and write off the club’s debts, essentially wiping the slate clean.

The best decision they ever made, though, was the one to appoint Stephen Kenny as manager. The Dubliner turned around the team’s fortunes almost immediately, taking them from 11th to 2nd in the space of one season. In 2014 they went on to win the double, taking home the league title with a dramatic final day victory over table toppers Cork City and the League Cup.

Kenny led the team to four league titles in five years, creating a side that was not only hugely successful but great to watch too. The highpoint of the Kenny era was undoubtedly reaching the group stages of the Europa League in 2016, where they defeated Maccabi Tel Aviv and drew with AZ Alkmaar.

The former Dunfermline and Derry City manager’s time was so impressive that he was put in charge of the U21 national team with a view to succeeding Mick McCarthy as senior manager. Due to the coronavirus pandemic, Kenny took over the job earlier than expected to try and qualify the team for Euro 2020.

Vinny Perth, Kenny’s assistant for five years, took over the mantle at Dundalk. He continued the club’s glorious success by winning four trophies in his first season, and it looked as if their period of dominance would continue unabated.

2020 has not been as smooth for Dundalk, however. They started the campaign with three consecutive wins, but a 3-2 defeat to Rovers, one of the most entertaining League of Ireland matches in recent memory, kicked off a poor run in which they won just one of their following four league matches. Although they weren’t out of the title picture just yet, Perth was sacked after a 3-0 defeat to Celje in the first qualifying round of the Uefa Champions League.

The club’s current owners, Peak6, who previously owned 25 percent of Bournemouth, took over in 2018. Matt Hulsizer is now the owner, but last December his father Bill was installed as chairman. His running of the club has been met with raised eyebrows, as he sought to take a hands-on approach to proceedings. His suggestions have included installing a phone in the dugout so he could have direct access to the manager during games from the US and getting the goalkeeper Gary Rogers to take corner kicks.

It has since been reported that the chairman wanted to have an influence on team selection, something any manager worth their salt would have no truck with, as was the case with Perth. There have also been major question marks over the recruitment process, with players from the collegiate system in the US being brought over even though they are nowhere near the requisite standard for Irish club football.

In a move that no one saw coming, Dundalk hired Filippo Giovagnoli to take over until the end of the season. A virtual unknown in mainstream footballing circles, the Italian had no senior managerial experience to speak of, although he played semi-professionally in Serie C where he played alongside Juventus and Italy legend Andrea Barzagli. He was the technical director of AC Milan camps in the US and Italy, making it a very strange hiring indeed.

The 49-year-old Giovagnoli described the job as a “kamikaze mission” to friends on WhatsApp, but he hit the ground running with a 2-0 victory over Cobh Ramblers in the FAI Cup before a thrilling 3-2 win against Shelbourne in the league. A 1-0 over Andorran outfit Inter d’Escaldes in the Europa League kept the winning run going, before defeating Sheriff of Moldova in a penalty shootout in the next round.

The so-called suicide mission was now becoming a dream for the Italian coach, who was just one game away from taking his team to the group stages. Dundalk were handed a huge slice of fortune when their name was pulled out of the hat alongside Faroese team KÍ Klaksvik, easily the softest draw they could have gotten in the playoff.

It was far from a foregone conclusion, however, as KÍ had defeated Dinamo Tbilisi 6-1 in the previous round. A Sean Murray opener at the Aviva Stadium put Dundalk at ease though, and from that point on they played some excellent football. A Daniel Cleary finish right after the interval was the perfect start to the second-half, and although the visitors got one back, the Lilywhites ran out 3-1 winners.

The scenes of joy that followed the final whistle were mesmeric, as the players leapt into each other’s arms in disbelief that they had repeated the trick from four years previously. This was only the third time an Irish team had achieved qualification for the group stage.

As for Giovagnoli, this could kick start his career into a new stratosphere. His CV will now show him to be a Europa League manager, which will open doors to places he never imagined. For now, he has the reins of this small provincial club in Ireland, which will become permanent very soon. The people of Dundalk will be happy to have him, as he has become a popular figure in the town and beyond.

Following the playoff win, Giovagnoli was asked who he would like to get in Friday’s draw. “I would love to play against Jose Mourinho, for sure. He is an icon of soccer, so just to meet him on the pitch, it would be amazing,” he admitted. He’ll just have to settle for the other big North London club later this month instead.

Read: From Roy Keane to Seamus Coleman, the League of Ireland’s best exports