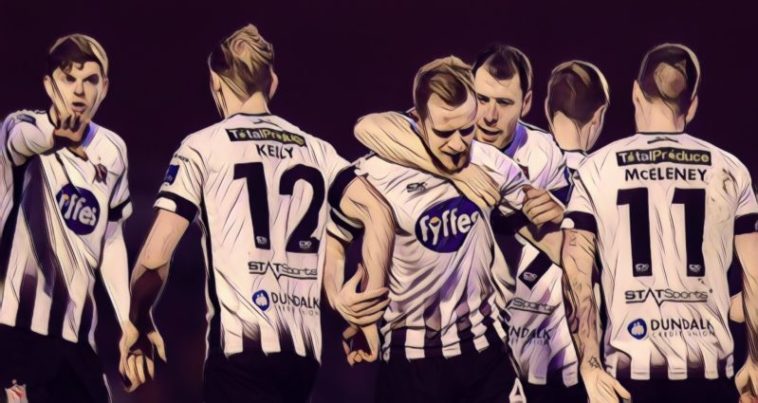 Dundalk defeated Bohemians 2-0 in the game of the week, showing the title pretenders how it’s done, while there were also good showings from Sligo Rovers, Cork City and Cabinteely.

The Lilywhites returned to the summit of the SSE Airtricity Premier Division table for the first time this season, overtaking Shamrock Rovers due to their superior goal difference. Meanwhile Derry City drew 1-1 with St. Patrick’s Athletic, Cork defeated struggling UCD 2-0 to keep their resurgence going, but all of the action came from Waterford and Sligo, who drew 3-3 on Saturday.

Five Observations from the League of Ireland during Gameweek 16:

Have Bohs been found out?

There has been an abundance of positives to take from Bohemian’s start to the season, not least the terrific form that has seen them flirting with the top end of the table for the first time in a decade. There’s been the continuation of their unbeaten run against fierce rivals Shamrock Rovers, the possibility of an EA Sports Cup semi-final should they beat Cork City, and most pleasingly the sight of big crowds at Dalymount Park. This writer had to secure a ticket for the Jodi Stand through a friend, rather than through the usual channels, a first in all my years of following Irish football.

What cracking support #Bohs are getting this year.

Crowds through 8 home league games up +54% year on year and the Dundalk game up +55% on the same game last year.

Disappointing result on the pitch but great support ?⚫️?⚫️

So far this season Bohs form has been built on the foundation of a solid defence — before Friday they had conceded just five goals, none from open play — a monumental feat from Keith Long and his assistant Trevor Croly after losing three centre-backs in the off-season.

The meanest defence in the league is not matched up front, however, as the Red and Black Army’s 15 goals scored is only joint-sixth with Cork. A lack of goalscoring threat was evident on Friday evening, as a dearth of imagination and cutting edge in the final third cost the home side dearly.

Danny Mandriou, playing in the hole behind striker Dinny Corcoran, was particularly disappointing, misplacing passes and making the wrong decision more often than not. He was also poor in the defensive phase, failing to close down the opposition when the ball was turned over, thus allowing Dundalk to progress the ball seamlessly in transition.

Keith Ward came on for Kevin Devaney with half an hour to go gave them a bit more control on the ball and to that end it worked, but they still had no incision when it came to the final third. The idea seemed to be to get the ball to Ward on the left flank, but without full-back Darragh Leahy creating danger on the overlap, the Lilywhites dealt with his easily. Even in the dying minutes, when they just needed to put it in the mixer, Ward had no outlet and passed it side to side.

Yes, the referee had a poor game, but in the end Dundalk were worthy winners. Bohs have now registered just one win and two goals in the four games since that win in Tallaght, and it feels as if teams have figured out how to cut off the supply lines and frustrate the Dublin outfit. Long will have to go back to the drawing board if his team wants to have a say in the destination of the title, but it might already be too late.

Dundalk’s team effort puts them back in the driving seat

It didn’t take long, did it? In the first week of April Shamrock Rovers had a 10 point lead over the chasing pack. By the second week of May Dundalk clawed their way back to the top of the mountain.

From the get-go Dundalk did not let Bohemians settle, pressing them hard in midfield and ensuring that Dinny Corcoran cut an isolated figure up front. As a team they looked sharp and went about their job in a professional manner; get in and out with three points.

It was Michael Duffy who was central to the visitor’s performance though, having a hand in each of the game’s most decisive moments. For the opening score the winger fought hard to protect the ball from two defenders, before the ball spun away towards Georgie Kelly, who dutifully made up for Pat Hoban’s absence with a fine finish into the far corner. It was the first goal Bohs have conceded from open play this campaign.

In the second Duffy delivered the cross that lead to the clincher, swinging a free-kick onto the head of Sean Hoare, who beat the onrushing goalkeeper James Talbot to put it in the back of the net. The Derry native even won a penalty not long before then, going down under the challenge of Luke Wade-Slater, but it was ultimately missed by Chris Shields.

In the end it didn’t matter, and even when Bohs got more of a foothold in the second half the Lilywhites were secure enough to see out the game and get a vital victory. They know by now how to win league titles, and in a way it felt as if they were schooling the young pretenders; this is how it’s done.

Sligo Rovers are quietly having a good campaign

An absolute thriller was played out at the RSC this past Saturday, when Waterford FC and Sligo Rovers scored six goals between them, and had a penalty save each.

The Blues would perhaps feel that they should be getting the better of the likes of Rovers at home, but the visitors have been gaining momentum of late.

Watch the highlights of a dramatic night at the RSC pic.twitter.com/GQW6l3YgX3 #bitored

The Bit O’Red’s form between the middle of March and the first week of April was wretched, losing four games consecutively. They’ve lost just once in the five weeks and eight games since, picking some big scalps along the way by beating the other Rovers and Dundalk away from home.

Whether or not Sligo have the makings of a decent team or are just riding the good form during a congested period of the season will come out in the wash eventually. But they have done enough in the past while to suggest they are in no danger of being dragged into a relegation battle, with almost no one paying close attention to them.

Cabinteely are proving they are no fluke with Longford win

Even in such a competitive setting as the First Division, Longford Town seemed a cut above of the rest, having stayed atop the league for much of the last month. They were brought back down to Earth, and second place, by an impressive showing from Cabinteely FC, who ended the host’s undefeated status.

The Dublin side replaced the midlanders in top spot thanks to a goal from star player Kieran ‘Marty’ Waters, who has been their best performer for several seasons now. He and Rob Manley, the league’s top scorer with 10 goals, have combined to help put Cabo in real contention for promotion.

This was a big statement of intent from Pat Devlin’s charges against a team that had only conceded two goals before Saturday night. This was the first they had conceded on home soil, and only the third after allowing a consolation during their 2-1 win over Wexford FC in April and one in a draw in March against… Cabinteely.

If nothing else, Longford Town did at least gain one new fan this past week.

It's not often we have a player in Longford who has scored over 78 goals for Chelsea, or has played for the giants Barcelona at the Nou Camp. Eiður Guðjohnsen was presented with a Longford Town Jersey after the Portugal v Iceland game earlier at the City Calling Stadium. pic.twitter.com/LWpY88jz1b

Bottom two cut off from the pack to fend for themselves

The uptick in form for Sligo Rovers is bad news for the bottom two of Finn Harps and UCD, both of whom before the season began would have believed they were the next worst team to whom they could try catch up. Sligo may very well be the eighth best/third worst side in the Premier Division, but they will be a distant eighth at that.

Successive wins for Cork City has pulled them away from danger, leaving the bottom-feeders to fight among themselves for ninth position and a relegation playoff spot. The Students appeared to have that place to themselves just over a month ago, but six losses on the trot, including a 3-0 turnover to Harps, means the two teams are separated by just two points.