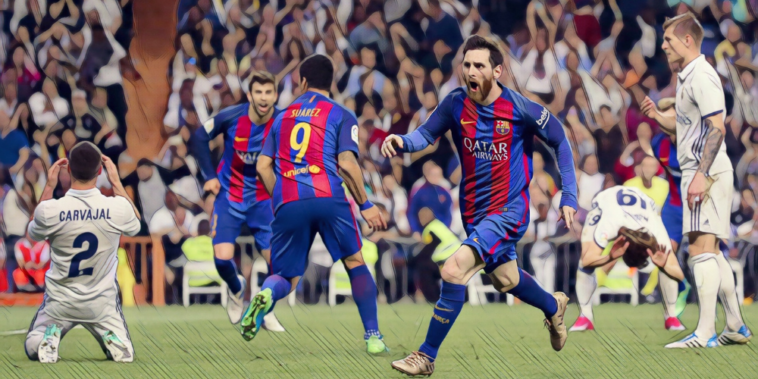 Real Madrid meet Barcelona this weekend in arguably club football’s biggest game, a seismic encounter between the Spanish giants which could have a definitive say on this season’s title race.

El Clásico contests are often captivating and the sporting world will stop to watch again this weekend in a fixture that has rarely disappointed in the modern era.

Just two points currently separate the two sides ahead of their meeting at the Bernabeu and ahead of the clash we’ve decided to revisit some of the most memorable matches between Real Madrid and Barcelona in the modern era.

Here are five of the best El Clásico clashes since the turn of the millennium.

Real Madrid’s determination to ensure dominance of Spanish football led to the famed Galactico era of signings in the capital, the club’s recruitment seeing four Ballon d’Or winners arrive at the Bernabeu in just five seasons.

The glamorous side assembled combined in fine style to secure an entertaining El Clásico victory during the 2004/05 season, the two teams exchanging six goals as Real emerged with all three points.

Real headed into the clash needing to win after Barcelona had opened up a nine-point advantage in the title race, and opened the scoring as Zinedine Zidane stooped to head home Ronaldo’s cross.

Ronaldo then doubled the lead after finding himself unmarked to meet David Beckham’s free kick, only for Samuel Eto’o to reduce the deficit against his former side.

Raul restored Real’s two-goal advantage on the stroke of half-time after turning home Roberto Carlos’ cross and the end-to-end football continued into the second half.

The result was put beyond doubt as Michael Owen raced onto Beckham’s pinpoint long pass before finishing superbly, rendering Ronaldinho’s fabulous free-kick a mere consolation for the Catalans.

One of the great Clásico encounters in recent memory and an evening when Lionel Messi announced himself as a superstar of the game, the teenager scoring a stunning hat-trick in a pulsating draw between Spanish football’s most successful clubs.

Barcelona headed into the clash after winning two consecutive league titles and the Champions League, but after losing back-to-back games against Valencia and Sevilla – alongside an elimination from Europe to Liverpool – an in-form Real Madrid smelt blood in one of the tightest title races in more than two decades.

Three times the capital visitors took the lead at the Camp Nou, only to be pegged back by a 19-year-old genius who completed his transformation from exciting talent to bonafide star.

The game began at an astonishing pace as the two sides swapped four goals in the opening half hour, Ruud van Nistelrooy and Messi each scoring twice in an enthralling end-to-end encounter.

Barcelona were reduced to 10 men before the break as Oleguer was sent off, the defender’s dismissal looking costly as Sergio Ramos headed Real back ahead, only for some Messi magic to rescue a point in stoppage-time and seal the first of many Barcelona hat-tricks.

The performance which underlined Barcelona were back under the guidance of Pep Guardiola, whose side moved within touching distance of a first league title since 2006 with statement result at the Bernabeu.

Real Madrid had found themselves 12 points behind Barcelona following a 2-0 loss at the Camp Nou in November, but a run of 52 points from 54 available had closed the gap to just four with five games remaining.

Only victory would have maintained their hopes of retaining the title, though the hope raised by Gonzalo Higuain’s opener was extinguished in emphatic fashion by the league leaders.

Sergio Ramos’ goal had briefly threatened a comeback, though Henry’s second of the game just two minutes later restored Barcelona’s cushion as the Catalan visitors began to dominate the contest.

Messi netted a second of his own to make it five before Gerard Pique scored the sixth with his first league goal for Barcelona, the league leaders becoming the first team to score six in an away El Clásico.

The win all but assured Barcelona’s 19th league title, the club crowned champions as part of a historic La Liga, Copa del Rey and Champions League treble in 2008/09.

Electric, end-to-end El Clásico entertainment, if ever there was an advertisement for club football’s biggest fixture, this was it.

Lionel Messi became the all-time leading scorer in contests between Barcelona and Real Madrid, as the former breathed new life into the title race with a 4-3 win at the Bernabeu.

Andres Iniesta opened the scoring for Barcelona with a powerful finish inside seven minutes, before Karim Benzema’s double turned the game around, twice firing home after being teed up by Angel Di Maria.

Cristiano Ronaldo won and converted a controversial penalty as Real led once more, but the pendulum swung back in favour of the visitors as Messi equalised with a spot-kick of his own, an incident which saw Sergio Ramos sent off for bringing down Neymar.

There was still time for one final and dramatic twist in the tale, a second Barcelona penalty providing Messi the chance to seal his hat-trick and a priceless three points.

Lionel Messi proved the difference once again to move Barcelona above their rivals at the top of the division, scoring a dramatic stoppage-time winner to hand the Catalan side the initiative in the title race.

A gripping game ebbed and flowed with both sides leading throughout the course of the 90 minutes, Casemiro opening the scoring for Real Madrid after tapping home from close range.

Messi – who had earlier been bloodied by a flailing arm from Marcelo – brought the teams level in familiar fashion with a slaloming run into the box, before Ivan Rakitic’s sweet strike put Barcelona in the ascendancy for the first time.

Real’s hopes of getting back into the contest looked over after Sergio Ramos was sent off for a reckless lunge on Messi, though substitute James Rodriguez thought he had rescued a point with a near-post finish five minutes from time.

As he has so often done previously it was left to Messi to pull a rabbit from the hat, firing home in stoppage-time for his 500th goal in Barcelona colours and celebrating by raising his shirt to bait the Bernabeu crowd.