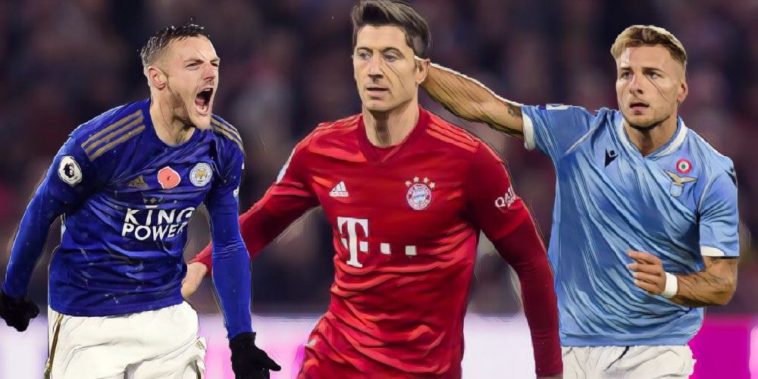 Europe’s top leagues are beginning to heat up as we enter the final international break of the calendar year, with tight title races and host of the continent’s top talents in red-hot form.

We’ve decided to look at some of the most prolific players of the campaign so far across Europe’s leading leagues, with seven forwards who can’t seem to stop scoring at present.

The Leicester forward is partying like it’s 2016 all over again, having enjoyed a blistering start to the campaign which has seen him emerge as the early leader in the race for the Premier League‘s Golden Boot.

The 32-year-old seems to be showing no signs of slowing down despite his advancing years, having fired 11 goals in just 12 league appearances for the in-form Foxes so far this season.

Brendan Rodgers’ side have enjoyed a brilliant start and currently sit second in the Premier League, and Vardy’s goals are likely to prove crucial in their bid to seal a surprise place in next season’s Champions League.

The return from injury of Anthony Martial has alleviated some of the pressure on the youngster, who has responded with a prolific run of form in front of goal for both club and country.

It’s now eight goals and two assists in his past nine appearances for Manchester United and England, the 22-year-old arguably enjoying the most consistent run of his career so far.

Rashford’s confidence seems to have been restored and if he can maintain this form, the sky is the limit.

It’s been some start to the season for Bayern Munich‘s brilliant number nine, who has arguably been the finest player in Europe over the opening months of the campaign.

The 31-year-old has scored in EVERY single Bundesliga and Champions League fixture the Bavarians have played thus far, with a DFP-Pokal win at Vfl Bochum – in which he came on as a half-time substitute – the only fixture he has failed to find the net.

Lewandowski’s tally now stands at 23 goals in 18 appearances in all competitions so far this season, and the forward currently leads the race to win a first-ever European Golden Shoe.

He scored another two this weekend against former club Borussia Dortmund. pic.twitter.com/Cje8e0iiQI

Unless you’ve been living under a footballing rock, you’ve probably heard of a Norwegian teenager who has made quite some mark on European football this season.

Erling Braut Haaland – the son of former Leeds and Manchester City midfielder Alfe-Inge – has grabbed the attention of some of the continent’s leading clubs following a prolific start to the season with Austrian side Red Bull Salzburg.

The 19-year-old has scored a barely believable 26 goals in just 18 appearances for his club so far, including becoming the first player in Champions League history to score seven times in their first four fixtures in the competition.

Manchester United are amongst the favourites to secure the signing of one of world football’s hottest properties, the leading scorer in this season’s Champions League who is averaging a goal in the tournament every 39 minutes.

Given he's only played 271 minutes, this works out at 2.3 goals per 90 mins… pic.twitter.com/pHqoc6unGd

Long linked with a move away from Red Bull Leipzig, the Germany international’s form this season may just secure him a switch to one of European football’s biggest clubs.

The 23-year-old is averaging a goal a game so far this season in the Bundesliga, having netted 11 times in just 11 appearances for Julian Nagelsmann’s side.

Werner has also added a further two goals in the Champions League for a Leipzig side who currently top their group, and with a reported release clause of just £27m, bigger clubs are likely to be circling, with Manchester United and Liverpool having both been strongly linked.

Timo Werner is on absolute 🔥 this season:

His second Bundesliga hat-trick of the campaign came in Leipzig's 8-0 mauling of Mainz… pic.twitter.com/QrKswgfXMH

For a player who humbly admitted it would be difficult to challenge the goalscoring feats of Cristiano Ronaldo upon the superstar’s arrival at Juventus, Lazio forward Immobile is making some go of it over the opening months of the season.

The Italian international has twice previously finished as Serie A’s top scorer and looks well placed to win the accolade for a third time, having hit 14 goals in just 12 appearances for the capital club so far.

The 29-year-old has scored in each of his past seven league fixtures, opening up a five-point advantage over Inter Milan’s Romelu Lukaku in the race for the Capocannoniere.

It may be time the forward begins to rate himself…

Ciro Immobile has been directly involved in 19 goals for Lazio in all competitions this season.

It’s been an injury-hit season for the French forward so far, though each time he has took to the field for Paris Saint-Germain he has delivered a reminder of why he is regarded as the finest young player in world football.

Mbappe has scored eight times in his past eight appearances for the Ligue 1 champions, including a stunning Champions League hat-trick against Club Brugge after coming on as a substitute.

His record now stands at 51 goals in just 63 league appearances since moving to the French capital from Monaco, a remarkable tally given that the forward is still just 20-years-old.

Thomas Tuchel’s side will hope to make an impression on the Champions League this season, and Mbappe will be key to their hopes.