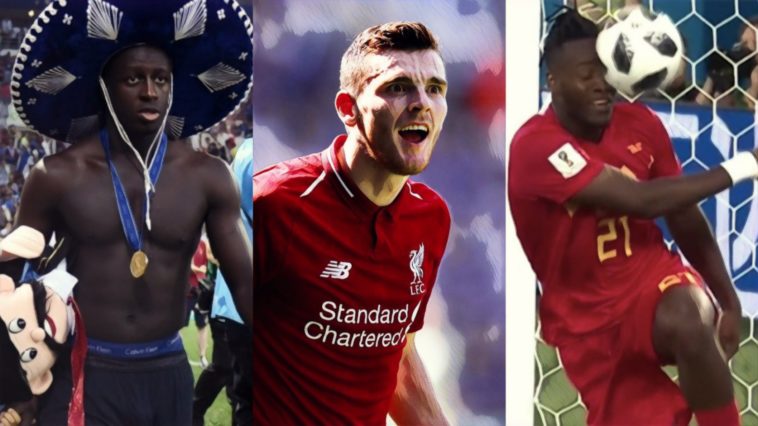 So many current and former professional footballers have Twitter accounts that they have run for them by some unknown digital marketer, tweeting mostly corporate nonsense.

Who needs that in their timeline? Nobody. So we’ve come up with ten of the funniest and most enjoyable footballers on Twitter.

One of the best full-backs in European football right now, Andy Robertson is also one of the best footballers on Twitter. The Scot has become a popular figure online with his appearances on Liverpool‘s official YouTube channel, his funny tweets and excellent facial reactions.

Pep Guardiola isn’t a fan of his social media antics, but Benjamin Mendy has been one of the funniest footballers on Twitter, probably ever. Few have been as consistently entertaining on the platform as he has.

Someone please find the sniper in the stands !! Hahaha 😭😂 @kylewalker2 u ok boi ?! 😂💙💙💙 pic.twitter.com/0BNIUbrTNI

The "Why is he doing that" face 😭😂 just having fun with all the photographs waiting down my hotel all day long ahaha 👋 pic.twitter.com/AJrKiGqAq4

The Irish journeyman may have more clubs than Tiger Woods, as he readily points out himself, but Cillian Sheridan is one of the funniest footballers you could possibly follow on Twitter. Last year he gained notoriety for his ‘fake news’ tweets in which he would pass off a completely made up anecdote as real in order to fool gullible strangers.

Incredible, you couldn’t write this stuff! The ball boy that helped Spurs with their second goal, is Pochettino’s youngest son Flavio who plays in the under 15’s at Spurs

It’s silly, but it worked and it was hilarious. News outlets even ran some of his tall tales in their publications without realising the joke. The former Celtic striker is worth a follow for his tweets, if not for his singing voice.

One of the most fun footballers to watch in the Premier League these days, Allan Saint-Maximin is a similarly fun follow on Twitter.

The Frenchman, who gained notoriety for wearing a Gucci headband while playing for Lille, has a great sense of humour, loves interacting with his followers and is always up for having a laugh on the timeline.

Guess where I am on the picture https://t.co/TKY1dPfaS7

Hello @PlayStation do you have PS5 for my followers? 😊 (I lie it’s actually for me)

Since retiring from the beautiful game, football’s lankiest man has seen his media career go from strength to strength. A lot of that is down to his charming manner and willingness to take the piss out of himself.

Summer for me is about time with family . pic.twitter.com/dtft1CZoyl

Perhaps I shouldn't stand next to jockeys 😕 pic.twitter.com/c3Ah9c9Pca

I've had some proud moments in my career but 2nd in the dads race today was special .

In the last year the Man City defender has come out of nowhere with a very funny Twitter personality. He may have lost his place in the starting lineup at City but Aymeric Laporte still has a place on our timeline.

Turkish Delight: Five of the best Turks to play in the Premier League

A former Netherlands international footballer, Emma Coolen gained a presence online with her self-deprecating humour and openness about not just life as a footballer, but her sexuality too.

Someone: 'But, Emma… If you like that girl so much and want to know if she's interested in you as well, why don't you just slide into those DMs and hit her with a smooth one-liner? What's the worst that could happen?'

A self-confessed “lover of Eurovision”, Coolen retired suddenly in October of this year and has since used her platform to advance the cause of women’s football.

Just to debunk some common replies to the #EqualityinFootball argument:

❌ No, we don't want female players to earn the same as men overnight
✅ Yes, we want to close the gap between male footballers earning millions a year and female players having to get a job on the side

Former Everton goalkeeper Neville Southall is a rare phenomenon in that he has become popular on Twitter well behind the world of football, attracting followers from all walks of life.

Why? The simple act of asking questions and taking on board new information (as well as his surreal tweets about Tory skeletons).

The Welsh legend has utilised his massive following of 171,000 people to advance causes he cares about, including mental health, addiction and LGBTQ+ issues.

How Neville Southall became a passionate voice for marginalised communities

Marten De Roon isn’t a star name on one of the biggest teams, but he is absolutely brilliant on Twitter. The Atalanta player is probably the most consistent tweeter of the lot, pumping out amusing tweets week after week. The Dutchman will definitely brighten up your week if you’re not following him already.

Note to self: act cooler when finding out about the camera at training. pic.twitter.com/KjCvCUxpIj

This is for my youth coach who said: if I could bench you four times, I would. Good luck boys @OnsOranje pic.twitter.com/z8984T7Mpo

Have we saved the best for last? Michy Batshuayi has never been able to establish himself at big clubs, but he has a strong claim to being the King of Football Twitter. A massive fan of banter, the Belgian never misses an opportunity to have a laugh and is always interacting with his followers.

But his most popular tweet ever came after he smacked himself in the face with a football by kicking it directly into the post at the 2018 World Cup.

The second just before I knew I f*cked up #InternetUndefeated 😂 pic.twitter.com/wAf5Wt6QvK