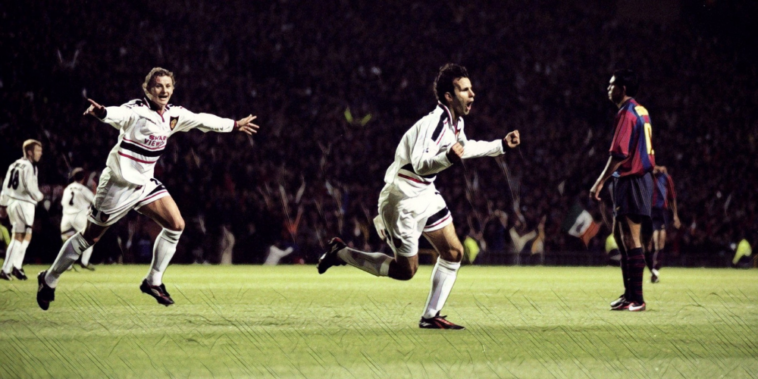 Manchester United face Atletico Madrid in the second leg of their Champions League last-16 tie this evening, the Red Devils in a favourable position to reach the last eight after a 1-1 draw in the first meeting away from home.

This season’s meeting is just the second between the two teams in continental competition, though United are experienced when it comes to facing Spanish opposition in Europe.

United have had some classic clashes with sides from the Iberian peninsula and ahead of tonight’s clash with Atletico Madrid we’ve decided to look back at some of the most memorable.

Ten of the most memorable games between Man United and Spanish clubs:

Ever wondered why the away goals rule was created? When the European Cup was devised in the mid-fifties, home advantage was far greater than it is now. Travelling was far more difficult, players were much less likely to have played abroad than they are now, and there were almost never away fans at fixtures, at least not in continental ties. This is important to keep in mind when we talk about this particular quarter-final in 1957.

Manchester United faced Athletic Club, the first time they had encountered Spanish opposition in the competition, and the opening leg took place in Bilbao. This being January in the Basque region though, it was far from a sunny Spain that United got to experience, as snow rained down throughout the game. Unsurprisingly the pitch was in dire condition, the combination of mud and snow creating a slushy surface.

The Spanish champions raced into a 3-0 lead before half-time, scything through a United defence that couldn’t handle their sharp and precise passing. The Red Devils came out after the interval ready to fight however, and Tommy Taylor and Dennis Viollet shot back with two goals of their own. Athletic didn’t panic however, adding two more to seemingly put the tie beyond doubt.

In the dying seconds of the game, however, United scored a third courtesy of Billy Whelan to end the game as 5-3 losers, their first ever European defeat, but it would turn out to be a priceless goal. Matt Busby had full belief in his team that they could turn over Los Leones at home and the players repaid that belief in full.

The return leg was played at Maine Road, Manchester City’s former ground, as Old Trafford didn’t have floodlights. Once again Viollet and Taylor were the scorers as United staged a storming comeback, before Johnny Berry put the tie beyond doubt five minutes from time. The game ended 3-0, completing the first of many famous United comebacks.

United would lose in the semi-final to the dynastic Real Madrid side of the fifties but would reach the FA Cup final — which they lost 2-1 to Aston Villa — and win a second consecutive league title that season, thus granting them another shot at the European Cup the next season. Tragically, the Munich Air Disaster less than a year after those contests with Athletic Club saw 23 people die, seven of which were Manchester United players.

Eleven years after their first encounter and ten since Munich, Manchester United and Real Madrid resumed hostilities in the European Cup in front of 120,000 spectators.

United won the first leg by the slenderest of margins thanks to a George Best goal, taking a 1-0 lead to the Spanish capital. In the return fixture Real, who won the trophy for the sixth time in 1966, took a commanding 3-1 lead by the end of the first-half.

Determined not to lose in the European Cup semi-finals for a fourth time, however, they came out fighting. As the Guardian’s match report stated, “United had defended like the ‘Red Devils’ they are nicknamed. Tonight, when the occasion came, they attacked like them too.”

United scored twice through David Sadler and Munich air crash survivor Bill Foulkes. The 3-3 draw was enough for the English side to progress to the final, where they would triumph over Benfica.

Bryan Robson has recalled this night as his best performance in a Manchester United shirt, and it’s not hard to see why. Barcelona were under the charge of Johan Cruyff, a tactical genius obsessed with his sides controlling the midfield area, but on this occasion the ex-England international dominated proceedings.

Robson hassled and harried the Catalans all night long and set up both of Mark Hughes’ goals. The Welshman’s second is one of his most famous finishes, pushing the ball past goalkeeper Carles Busquets before scoring from a tight angle against his former team.

A Ronald Koeman free-kick gave the Blaugrana hope of getting back into the game, but Alex Ferguson’s charges held out for the club’s first European trophy in 23 years. Cruyff’s ‘Dream Team’ would have their revenge though, defeating the Red Devils 4-0 in the Champions League in 1994.

I’m loathe to rely on cliché, but this game really had everything: six goals, a red card and a penalty. It foreshadowed a lot of what was to come in Manchester United’s treble-winning season, namely drama, David Beckham’s mastery from set pieces, and an affinity with the number three.

This game also has a footnote in the history of football for being Xavi Hernandez’ Champions League debut. That piece of trivia will come in handy at a table quiz, I’m sure.

Yes, Barcelona and Man United did it all again just two months later.

This game is best remembered for Andrew Cole and Dwight Yorke cutting through the Barça defence like Zorro with a beautiful back-and-forth passing move, before the English striker slotted home to give the Red Devils the lead.

In a clash of the competition’s two previous winners, Alex Ferguson was not confident of his side’s chances of victory against Real Madrid following a 0-0 draw in the first leg at the Bernabeu, admitting afterwards that United were outclassed.

The home team had a positive start to the second leg however, creating some decent chances early on. They were having issues down the wings though, with Roberto Carlos finding space on the left and almost taking advantage of an under-hit Gary Neville pass back. But it was on the right-hand side of the pitch where Real would find luck when a Michel Salgado cross went in off a sliding Roy Keane.

Two Raul goals in as many minutes early in the second half killed off any chance of a comeback, although a David Beckham goal and a Paul Scholes penalty put some respectability on the scoreline.

In the space of a year in the early noughties, Man United and Deportivo La Coruna would meet six times, with the Spaniards making awkward opponents of themselves during that period.

Their first encounter saw the relatively small side from Spain come away with a 2-1 win at home, before repeating the feat in a five-goal thriller at Old Trafford. The reigning La Liga champions would progress to the second group stage thanks to their two wins over the Red Devils.

The two sides would meet again in the quarter-finals of the Champions League, but with the stakes even higher than before, Depor could not repeat the trick.

United won the first leg 2-0 at the Riazor, before competing in another five-goal thriller with the Herculinos, a brace from Ole Gunnar Solskjaer and a goal from Ryan Giggs sending them through to the last four.

This is also the match where David Beckham infamously broke the metatarsal bone in his foot, endangering his chances of playing at the 2002 World Cup.

This one is regarded as one of the all-time greatest Champions League contests, although for me it lacked the intensity of a truly great European game, as it was plain to see who the eventual winners would be from early on.

Real, possessing an outstanding collection of superstars that included Claude Makelele, Zinedine Zidane and Roberto Carlos, won the first leg at a canter, although a late Ruud van Nistelrooy consolation gave the Red Devils some measure of hope for the second leg.

16 years on, this game is remembered for three things: Ronaldo’s performance, David Beckham’s sub appearance, and John O’Shea ‘megging Luis freakin’ Figo. Let’s just take a moment to savour that moment once more. The Waterford man receives the ball on the right wing and appears to be well marshalled by the Portuguese legend, but O’Shea shifts the ball from one foot to the other before splitting Figo’s legs with the ball. Straight fire.

United’s hopes of a comeback were given a reality check by Ronaldo in the 12th minute, whose terrific first-time finish as the ball was moving at speed away from the goal beat Fabien Barthez at the near post. “Heart breaker” was a fitting summation by commentator Clive Tyldesley, as the camera panned to the bench for Beckham’s reaction.

Van Nistelrooy got one back right before the half to restore a modicum of hope, but the game went exactly as you might think when Wes Brown and O’Shea are trying to keep tabs on Ronaldo. The Brazilian famously received a standing ovation from the Old Trafford crowd as he came off in the second-half, having scored a hat-trick.

With United losing 3-2 Beckham finally came off the bench to score a brace and give the home team their first ever win over Real, but they went out 5-6 on aggregate. Even if they had scored again before the full-time whistle, they still would have lost on the away goals rule. The England winger’s benching foreshadowed his eventual exit from his boyhood club, joining their victorious opponents that very summer.

Although there was never any doubt about Real’s progression, this was an end-to-end match that featured tonnes of attacking thrust and guile on both sides. United’s defence wasn’t good enough to reach the latter stages of the competition, but they did highlight some weaknesses in the opposition, which Juventus took full advantage of in the semi-final.

Contrastingly to this game, there would be very little entertainment between United and Spanish sides for years to come, with five goalless draw in the next six games against Iberian opposition. The only goal coming from the foot of Paul Scholes in the 2008 semi-final win over Barça. Their next meeting with the Catalans would not go so well.

The photograph below shows the exact moment when Edwin van der Sar knew he, and by extension his team, were absolutely goosed in the 2009 Champions League final.

Lionel Messi, a man who had never scored against an English outfit up to that point of his career, a player not known for his heading ability, leapt into the air to meet Xavi’s cross.

As the ball nestled into the far corner of the net, United’s hopes of retaining the trophy died right there and then as the Argentinian scored Barça’s second of the night.

The two teams would meet again in the final two years later, with Barcelona winning yet again in one of the most dominant final performances of all time at Wembley.