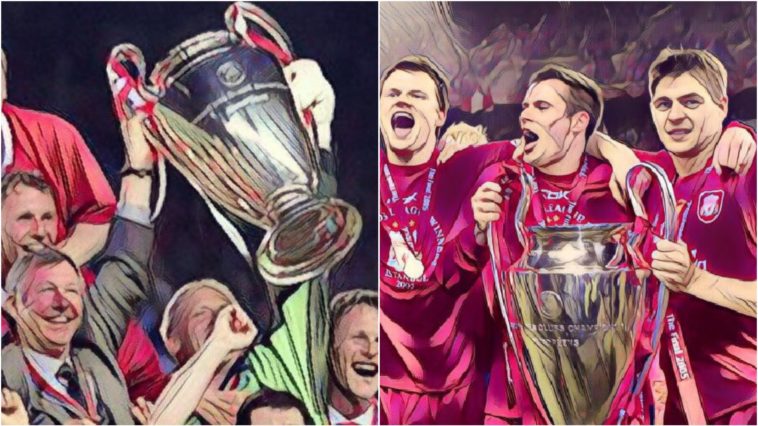 There have been some epic Champions League wins by Premier League teams through the years, from That Night In Barcelona to the Miracle of Istanbul.

No country has provided more finalists for the Champions League or European Cup than England. Tottenham Hotspur will become the eighth different English club to contest one, following in the footsteps of Arsenal, Aston Villa, Chelsea, Leeds United, Manchester United, Nottingham Forest and, of course, their opponents this Saturday, Liverpool.

While Spurs are heading into the unknown, Liverpool will be contesting their ninth Champions League final, having played in last year’s against Real Madrid and won five overall. Whoever wins will become the 13th English team to conquer the most prized competition in club football.

Each one of those successes was a brilliant achievement by the respective clubs, but we’ve picked out some of the best down through the decades.

On their way to an unlikely fifth Champions League triumph, Liverpool somehow scraped their way past a series of tough obstacles: Steven Gerrard’s last minute goal against Olympiakos, defeating Juventus in their first meeting since the Heysel disaster in 1985, and the ghost goal being the sole differentiator between them and a superior Chelsea side in the semi-final.

But a greater obstacle lay in front of them in the final in the form of AC Milan, winners of the 2003 Champions League and arguably the best team of the decade.

We all know the story by now; 3-0 down, back to 3-3, before winning on penalties in the most shocking turnaround in a game ever seen. There’s a reason they call it the Miracle of Istanbul.

“AND SOLSKJAER HAS WON IT!”

Until Lucas Moura’s last second winner for Spurs against Ajax in this year’s semi-final clash, this was possibly the most thrilling finish to a Champions League game ever seen.

A goal down heading into injury-time, Manchester United desperately needed a goal against Bayern Munich. A David Beckham corner eventually makes its way to Ryan Giggs on the edge of the box, whose mishit shot was directed into the goal by Teddy Sheringham.

The match was heading for extra-time, until another corner just moments later was converted by Ole Gunnar Solskjaer. That finish completed a historic treble for the Red Devils, the first time it had it ever been done.

Read: Five of the most memorable Champions League finals

An unlikely winner had an unlikely hero in the final, as Nigel Spink made a series of saves that kept Aston Villa in the final against Bayern Munich. The young goalkeeper, who was only making his second appearance of the season, came on after ten minutes in place of the injured Jimmy Rimmer.

Despite having the likes of Karl-Heinz Rummenigge, Paul Breitner and Dieter Hoeness in the ranks, Bayern simply could not find a way through. Peter Withe was the difference-maker who scored from a Tony Morley cross in the 67th minute of the game.

The victory continued English dominance of the competition, as they were the sixth consecutive team from England to win it.

Read: The eight teams to make it to back to back Champions League finals

One of the least likeliest winners of the competition in its history, Nottingham Forest’s European Cup win under Brian Clough is rightly considered a miracle.

Forest bested reigning holders Liverpool in the opening round, laying down a marker for the rest of the tournament as they defeated AEK Athens, Grasshopper (who had knocked out Real Madrid) and Köln on the way to the final. There they overcame Malmö FF 1-0 in Munich. Even more incredibly, they successfully defended their crown the next season by beating Hamburger SV in Madrid.

Quiz: Can you name every Champions League runners-up?

When you’re the first to achieve something in your field, blazing a trail for others to follow as Manchester United did by being the first English team to win the European Cup, it’s always going to be special. But there’s something especially poignant about winning ten years after suffering one of the worst disasters to hit a football team.

Eight players perished in the Munich Air Disaster in February 1958, but Matt Busby rebuilt his side almost from scratch. Within seven years his team had won the First Division again, and three years later they were champions of Europe.

The final itself took place at Wembley, where United and Benfica, two-time winners in the early sixties, couldn’t be separated after 90 minutes, but goals from George Best, Brian Kidd and Bobby Charlton in extra-time secured a 4-1 win for the English side.

Read: Europa League final was a microcosm of the difference between Arsenal and Chelsea

See Also: Every English club to have won the Europa League and Uefa Cup since 1970