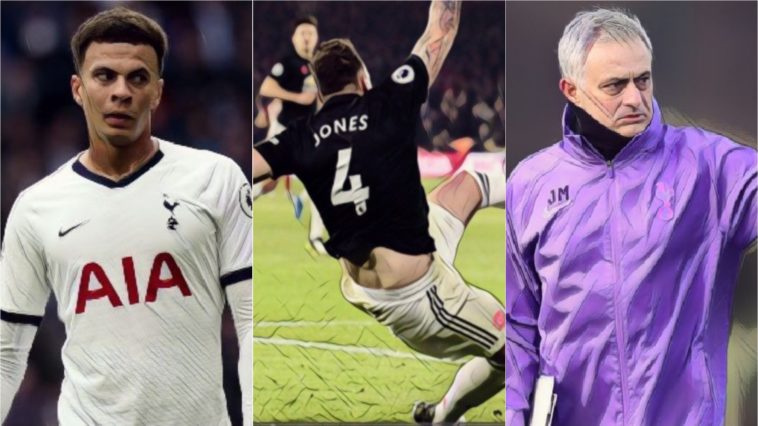 The breaks continue to fall their way, but it can hardly be considered a fluke that Liverpool scored yet another late goal to take home all three points on Saturday. Crystal Palace looked as if they were going to be the Reds’ bogeymen once again, but Roberto Firmino popped up with his first goal in eight league games to give the visitors a 2-1 victory.

Since August 2018, Liverpool have scored 32 goals in the final fifteen minutes of league fixtures, far more than any other team. They also lead the division in goals scored in the final five minutes of matches this season, having scored five times past the 85th minute.

Runner-up: Norwich City getting their first away win of the season at Everton. The start of a resurgence in their battle to stay in the top flight, or just the beginning of the end for Marco Silva?

“I asked him if he was Dele or Dele’s brother. He told me he was Dele. ‘OK,’ I said. ‘Play like Dele’.” Those were Jose Mourinho’s word of advice during the new manager’s first training session at Tottenham Hotspur – and it worked a treat.

Dele Alli assisted the opening goal for Heung-min Son, but he also made a ton of intelligent runs, occupying multiple defenders to create space for others, and did some trojan work throughout the game.

“Are you Dele’s brother? No, then play like Dele.”

The Prince is fucking Back 👑 pic.twitter.com/X6mDwhfahx

But it wasn’t just Mourinho’s pep talk that did the trick. The Portuguese tactician played Alli in his preferred position, essentially a quasi-10, where he can play as both a makeshift playmaker and a second striker. It will be interesting to see how he does against a team that isn’t on flames like West Ham, but it appears as if reports of his decline have been greatly exaggerated.

Saturday: Joao Moutinho does this.

What a sweet connection that was.

If there was one moment that summed up how re-energised Spurs were this week after the change in manager, then it was Dele Alli’s flick to not only keep the ball in play but to start an attacking move that finished with Lucas Moura scoring the team’s second goal of the day.

Read: How will Spurs play with Mourinho in charge?

One-on-one with Alisson and a chance to edge Palace in front against the league leaders, Wilfried Zaha fluffed his lines, blazing the ball over the bar. That miss would come back to bite them on the arse, as Liverpool inevitably won the match.

To be fair to the Ivorian international, so much of the attacking output is put on his shoulders, and it was his brilliant movement off the ball that resulted in him getting the shot on goal for the equaliser. Still, what a miss that was.

Zaha really missed the target from there pic.twitter.com/ZX0hztGWet

For a goalkeeper who conceded three goals at the weekend, David De Gea had a decent game in nets for Manchester United. The Spaniard made a terrific double save early on in the first-half, first from a John Lundstram effort before denying David McGoldrick from point-blank range.

The Spaniard keeps Man United out of trouble with a fine double save. Should McGoldrick score from there?

2019 has been a pretty miserable year for De Gea, but bit by bit he is regaining his form between the sticks.

It was an extraordinary week for howlers, in which it seemed the cock-ups would never end. In the history of this column we have never seen anything like it, so here we go:

No better place to begin that Phil Jones. When it was revealed the United defender would be making his first league appearance of the season, we all knew the game at Sheffield United would not go without incident. And so it was hardly surprising that he was at fault for the Blades’ opening goal.

The Englishman should have dealt with a simple long ball over the top with ease, instead he got absolutely flattened (with a fair shoulder) by Lys Mousset, and the move ended with John Fleck putting the ball in the back of the net.

Mousset gets in behind Jones and pulls it back for Fleck to eventually scramble over the line.

Fellow serial balls-up merchant Sokratis had his own moment of madness, needless losing the ball inside his own box against Southampton. He was lucky the Saints didn’t capitalise on it, but Arsenal drew 2-2 in yet another poor performance from the Gunners. It says an awful lot that the homes fan booed despite the fact their own team scored a 96th minute equaliser.

Then we have Kepa Arrizabalaga, who had the bold strategy of passing the ball straight to Sergio Aguero, of all people. The Argentine couldn’t take advantage of the absolute gift handed to him, hitting the post with his effort, much to the relief of the goalkeeper. Manchester City defeated Chelsea 2-1 nonetheless.

Read: Arsenal are worse now under Emery than they were with Wenger

All the respect in the world to Pep Guardiola for his achievements and how he’s evolved the world game over the past decade, but what in the name of jaysus was he thinking with that jacket he was wearing on the touchline against Chelsea?

I expected better fashion choices from you, Josep.