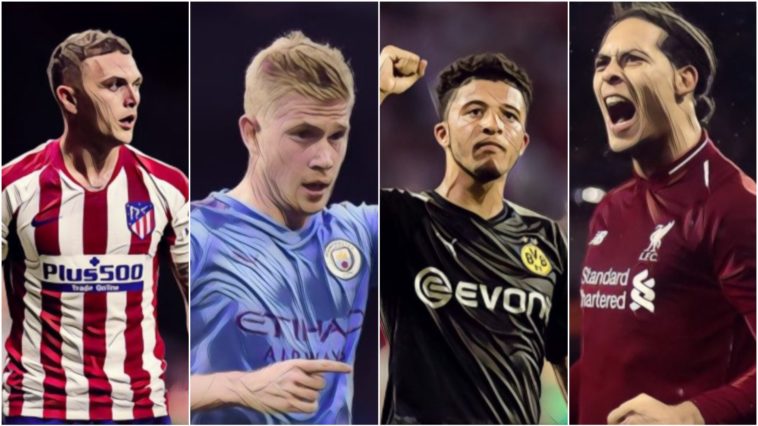 With the Champions League draw complete, we look forward to the tastiest fixture from each group ahead of the first kickoff on September 17.

All of the English clubs have at least one high profile game, while there are some very appealing fixtures in the other groups to salivate over in this year’s competition.

One mouthwatering Champions League game from each group:

A: PSG vs Real Madrid

There’s half a chance Neymar could be playing for Real Madrid by the time this fixture comes around, but let’s just assume for a moment he’s staying put (because, realistically, who wants all that drama anyway?)

The new Real look a lot like the old Real, despite spending a boatload of money on new recruits this past summer. Despite manager Zinedine Zidane openly admitting he no longer wants Gareth Bale, the Welshman started the first game of the LaLiga season alongside James Rodriguez, who had been thought to be on the way out as well.

Eventually Zidane will form a settled starting XI, but their Parisian foes should look at this game as a perfect opportunity to slay a European giant. Even with the Neymar stuff going on in the background, PSG still have a monstrous collection of quality on hand: Kylian Mbappe, Angel Di Maria, Edinson Cavani, Julian Draxler and Marco Verratti is an insanely talented cast to call upon, and the club have bolstered the base of their midfield by recruiting former Manchester United man Ander Herrera and Idrissa Gana Gueye, who they signed from Everton.

This is my lowkey pick for one of the most entertaining games of this year’s competition.

B: Spurs vs Bayern

Last season Tottenham Hotspur were drawn in the group of death alongside Barcelona, Inter Milan and PSV Eindhoven. They qualified for the next round by the skin of their teeth, before embarking on a crazy journey that featured VAR controversies, last minute winners, incredible comebacks and final heartbreak.

This year their task appears easier, with Olympiakos and Red Star Belgrade joining them in Group B. The Lilywhites will still have to face an almighty task in the form of Bayern Munich though, who look formidable after a solid summer of signings.

The Bavarian outfit brought in defensive supremo Lucas Hernandez, World Cup-winning full-back Benjamin Pavard, and no-nonsense winger Ivan Perisic. The marquee signing had to be Philippe Coutinho however, the ex-Liverpool man joining on loan from Barcelona.

Bayern will not only be tough to break down at the back — something we’ve seen Spurs struggle with early on this season — but they will be formidable up top too, as Perisic and Coutinho will be supplying centre forward Robert Lewandowski.

Uncertainty surrounds the futures of key players Jan Vertonghen and Christian Eriksen, but if Mauricio Pochettino can get new signings like Giovani Lo Celso and Tanguy Ndombele embedded in the starting lineup, then this should prove to be a close tie.

Let’s be honest: Manchester City got a plumb draw. Now we’ve seen the Premier League champions stutter at this stage before, namely last year when they surprisingly lost to Lyon, but they should have no problem facing Shakhtar Donetsk and Dinamo Zagreb.

Those teams will offer tricky away trips, but City have more than enough quality to account for them. Atalanta, on the other hand, might be underrated going into this year’s group stage. The Italian outfit are an entertaining side, scoring more goals than any other team in Serie A last season. Yes, that includes Juventus who have Cristiano Ronaldo to call upon.

Gian Piero Gasperini has done a magnificent job as manager of the Bergamo club, qualifying for the Europa League in successive campaigns and reaching the Coppa Italia final last season. Last year’s club record points total was beyond expectations, especially considering they were in Serie B as recently as 2011.

This is no fluke, however, and Atalanta deserve to be here. Unlike the stereotype attached to most Italian teams, they are an attacking side led by playmaker Papu Gomez, so expect plenty of goals in their upcoming matches. Defensively they need to tighten up, although they recently drafted in former Liverpool centre back Martin Skrtel. That might only make things worse, actually.

Atalanta visited Britain for their pre-season tour this year, beating Swansea and Norwich, before losing to Leicester City. To get an idea of what they are like, watch this highlights package of their wild comeback win in the first league game of the campaign:

A rematch from last year’s round of 16, in which Juventus pulled off an incredible comeback by winning the second leg 3-0 and overturning a two goal deficit from the first tie.

There’s a decent chance this meeting will not be as intense or entertaining as last year’s, but the great thing about this matchup is that we get to find out pretty early on how good each side is. Atleti have invested heavily in teenage attacker Joao Felix, as well as bringing in Kieran Trippier from Spurs.

Juve, meanwhile, have had another season of major upheaval, buying Matthijs de Ligt, Danilo, Adrien Rabiot, Aaron Ramsey and welcoming back Gianluigi Buffon. The question mark hovers over how well they can all gel under new manager Maurizio Sarri, as the Old Lady are clearly bidding for European success now, not down the line.

This fixture could give us an insight into how well placed either side is to challenge for the mouse ears come May.

Sadly the homogenisation of the Champions League means that repeat fixtures such as these are more likely every year. The same teams qualify year in, year out and invariably face each other again and again. That doesn’t mean this won’t be a cracking tie though.

The Napolitains could consider themselves a tad unfortunate to exit the competition at this stage last season, losing out to PSG and Liverpool. They drew with the Parisians twice and beat Liverpool at home, but a 1-0 defeat at Anfield sent them through the Europa League trapdoor.

With just Salzburg and Genk in their way this time, they should be fine, especially considering they look even stronger than last year. They somehow tied Kalidou Koulibaly down to a new deal despite being one of the most sought-after defenders in Europe. They also brought in Hirving Lozano and Kostas Manolas to bolster an already formidable squad, which features Dries Mertens, Lorenzo Insigne, Arkadiusz Milik, Allan and Jose Callejon.

With Carlo Ancelotti in charge, Napoli’s bid to gain a measure of revenge on the European champions should be a fascinating watch, as will their plan to stop the Reds’ high energy style.

It’s fair to say Barcelona are not as enjoyable to watch as they once were, but they still possess the pedigree to go far in this competition. After suffering devastating comeback defeats in back-to-back campaigns, there really is no messing about this year.

Dortmund might not be quite ready for a tilt at the trophy, but they’ll give plenty of teams a scare this year. Everyone is aware of Jadon Sancho’s ability at this stage, while they still have Marco Reus and Mario Götze doing the business. They brought back Mats Hummels from Bayern to strengthen their backline, while injecting some exciting youthfulness into the team by getting Thorgan Hazard and Julian Brandt.

Barça reject Paco Alcacer was banging in the goals in the Bundesliga at a phenomenal minutes-per-goal rate, but the Catalan outfit will be stronger through the middle this season. They spent big on Dutch player Frenkie de Jong, who should invigorate an aging midfield that was overrun in the second leg of last season’s semi-final.

This should prove to be a compelling contest between a serious contender and a hopeful pretender to the throne.

Group G, comprising Zenit St. Petersburg, Benfica, Lyon and Leipzig, features none of the competition’s heavy hitters, but neither does it contain a proverbial whipping boy. Each side is roughly on a similar level and would fancy their chances of qualification, making this one of the more interesting groups to watch over.

Benfica are coming off the back of a terrific season having won the Portuguese league, but have sold their best player in Joao Felix to Atletico Madrid, while you can never be quite sure what Russian teams will offer in Europe. That leaves Lyon and Leipzig as the most compelling teams of the four, and both will harbour ambitions of making a surprise run.

Zenit, Benfica, Lyon and Leipzig is going to be an absolute mess for qualification and I am all for it.

If Zenit were the side everyone wanted from the first pot, then the Germans were the fourth seed that no one wanted. As this is their first time in the competition they were entered into the final pot, despite being a better team than that suggests. Their counter-pressing style puts the opposition under serious pressure, while they also have the impressive Timo Werner, who has scored 50 Bundesliga goals in the last three campaigns.

Lyon, on the other hand, are an aggressive team that prefers to hold onto possession, which they will find tough against Leipzig’s press. Their main objective will be to get the ball to the wings, especially on the left-hand side where a familiar face to Premier League fans resides: Manchester United-reject Memphis Depay. The Dutchman has been on fire for Les Gones since joining in 2016, providing 37 goals and 31 assists. He already has four goal involvements in three Ligue 1 games this year.

This could either be a battle for top spot or a mad scramble to squeeze through in second place.

If there’s one thing we’ve learned from the opening few weeks of the Premier League season, it’s that Frank Lampard’s Chelsea™ are a work in progress. But they might also be one of the more fun teams to watch this season.

The Blues are employing a high pressing game plan under their new manager, but they are still working out the kinks as they go along. The 4-0 loss to Manchester United on the opening day was bad, but they’ve steadily improved with every performance since.

Allied with the fact Lampard is trusting the young guns to make it work — all of their league goals thus far have been scored by academy products — and this Chelsea team are a flawed but entertaining side to keep an eye on.

Ajax were the darling of last year’s Champions League, before losing in heartbreaking circumstances in the semi-final to Spurs, and now the team has been shorn of their best players. Daley Blind played in midfield in the qualifiers, which suggests they won’t have anyone near the quality of de Jong in the centre of the park this year.

It will be interesting to see how they do nonetheless, and if they can prove they are more than just a one hit wonder. That makes their tie with Chelsea all the more enticing.

Read: The Champions League group stage draw for 2019/20 in full