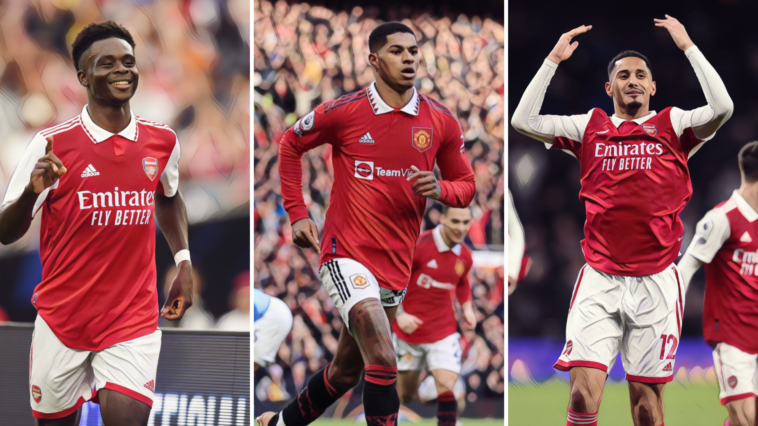 Arsenal and Manchester United meet in the Premier League this weekend, in perhaps the biggest clash between the old rivals since their time as the division’s dominant forces.

Arsenal are top of the table and extended their lead to eight points with a North London derby win at Tottenham last weekend, setting up a huge clash with a Manchester United side who have won nine of their last ten in all competitions.

Ahead of a huge showdown at the Emirates, we’ve picked our Arsenal and Manchester United combined XI.

David de Gea came to the rescue for his side in midweek with a fine performance at Crystal Palace, as the Spaniard’s shot-stopping earning the Red Devils a point.

De Gea’s distribution has often been criticised and he lacks behind Aaron Ramsdale for building from the back, but there has been evidence of improvement this season. In terms of reactions and saves, few in the Premier League are as capable as De Gea when it comes to spectacular stops.

What a save, David de Gea! 😲 pic.twitter.com/PBhTv7KwX8

His time in the Premier League has had peaks and troughs, though the 32-year-old has been one of the division’s best goalkeepers for a decade. Ramsdale – despite his impact on an improving Arsenal – has some way to go to match a list of achievements that includes five PFA Team of the Year inclusions and a joint-record four club Player of the Year accolades.

Ben White’s move to right-back has proven a masterstroke for Mikel Arteta this season, who has tweaked his backline to provide Arsenal with a solid foundation.

William Saliba has come in to form a fine partnership with Gabriel at centre-back, with White moved to a full-back role in which he has excelled. The 25-year-old has barely put a foot wrong in his new position, demonstrating his ability to adapt after previous periods in midfield (Leeds) and central defence (Brighton).

Comfortable, composed and with excellent distribution through defensive lines, White has taken to the right-back role with ease. Whether it is marauding forward to support Bukayo Saka or tucking inwards to form a central three, he has been a pivotal part of a defence that has conceded just 14 goals this season.

Arguably the pillar on which Arsenal’s defensive record has been built this season, William Saliba is enjoying a memorable first campaign in north London.

Three separate loan spells allowed Saliba to develop away from the glare of the Premier League spotlight and he has returned ready-made to make an impact on Arsenal’s season. Dominant in the air, graceful, and mentally mature enough to handle the big occasions, he has emerged as one of best young defenders in Europe this season.

Alongside Gabriel, his shutdown role on Harry Kane last week saw Arsenal claim a first league win at Tottenham since 2014 and he looks set to be a key figure in the Gunners’ development over the coming seasons. The north Londoners are looking to tie Saliba down to a new long-term contract and with good reason.

Raphael Varane has been one of world football’s finest centre-backs across the past decade and Manchester United have felt the full force of his presence this season.

Fitness problems plagued his debut campaign at the club, but Varane has produced a run of consistent performances that makes him Erik ten Hag’s go-to selection at centre-back. Few players in world football boast as successful a résumé as the Frenchman, who counts four Champions League titles and the World Cup among his extensive collection of honours.

The task now will be winning silverware with the Red Devils, who have a solid foundation on which to build with Varane snuffing out danger at the heart of the club’s back four.

Luke Shaw’s career with Manchester United has proven somewhat of a rollercoaster, but the left-back has blossomed this season into a defender producing top-class levels on a consistent basis.

His season began in disastrous fashion after he was dropped following the capitulation at Brentford, spending eight games on the bench before hard work on the training ground earned his place back in the side. It is a chance he has grasped with some of the best performances of his career, impressing both defensively and offensively.

Recent fixtures have seen him operate in an unfamiliar centre-back role and he produced a shutdown performance on Erling Haaland last weekend, leading the Manchester Derby for clearances.

Ten Hag has called Shaw a leader within his side, and on recent evidence, it’s difficult to argue against. He’s performed in two positions and done both to the highest standard.

Casemiro’s absence could be a decisive factor in this weekend’s crunch clash, after the midfielder picked up a suspension against Crystal Palace in midweek.

The Brazilian has been brilliant since his introduction into the Manchester United side, producing a series of monstrous midfield performances to underline his status as one of the world’s best defensive screens.

Whether it’s crashing into challenges or spraying passes out to the flanks, the five-time Champions League winner has proven the perfect general to lead Ten Hag’s troops this season.

Casemiro will miss Manchester United's game against Arsenal after picking up his fifth yellow card in the Premier League 😨 pic.twitter.com/MNb2Lmcc9n

Casemiro’s absence will deny neutrals the chance to watch a fascinating engine room contest, with Thomas Partey having had quite the season at Arsenal.

Having overcome the fitness issues which plagued his first two seasons with the Gunners, the Ghanaian has stamped his authority on Premier League midfields this season. Partey has bettered Casemiro for progressive passes, pass accuracy, possession won and duel success per 90 minutes during the current campaign.

Given the levels of the Manchester United midfield enforcer, it is evidence of Partey’s importance to Arsenal’s title challenge.

Is there a better player in the Premier League right now?

Martin Odegaard continued his fine form with a fantastic effort in Arsenal’s win at Tottenham, continuing his hot streak around goal. Odegaard has eight goal involvements in his last seven Premier League appearances and is now the leading goalscorer among midfielders in the division.

The 24-year-old has found an improved end product to match the subtle touches of class that define his game, operating in an advanced role in Arsenal’s midfield with the task of manufacturing chances.

What a finish this is! 💥

A leader by example in a team fast improving and looking more and more like potential champions with each game. He is looking to become the first man since Patrick Vieira in 2003/04 to captain Arsenal to the Premier League title.

Bukayo Saka just keeps on getting better and better in an Arsenal shirt.

The winger has returned to club action in fantastic form after some excellent displays at the World Cup and scored during Arsenal’s wins over West Ham and Brighton last month.

He has 13 goal involvements in just 18 league appearances this season and leads all u21 players in Europe’s top five leagues for assists in 2022/23.

No U21 player in Europe's top five divisions has provided more league assists this season than Bukayo Saka (7).

Only Kevin De Bruyne (10) has provided more than Saka’s seven assists in the Premier League this season. His decision-making in the final third and ability to beat players one-vs-one is already at a top-class level and there’s still much room for Saka to grow and reach the ceiling of his potential.

Arsenal’s young guns have led the club’s charge towards the top of the Premier League table and perhaps no player embodies Mikel Arteta’s side more than Gabriel Martinelli.

The Brazilian is an irresistible talent at his best, brimming with speed, skill and an infectious endeavour. Martinelli has started all 18 of Arsenal’s league games this season and has already bettered his total from last season with seven goals.

Electric and indefatigable in equal measure, it is a combination which has made Martinelli a thorn in the side of even the Premier League’s best full-backs. A pure pest, meant in the most complimentary of manners.

Marcus Rashford leads the line in our combined side with the forward moved into a central role given the lack of standout options in either squad.

Rashford has been in brilliant form this season and has scored 16 goals in his last 25 appearances for Manchester United, becoming the first player since Cristiano Ronaldo in 2008 to score in seven consecutive games following the season’s restart.

After a difficult 18 months, the 25-year-old appears better than ever, with Ten Hag having honed the forward’s attributes to turn Rashford into one of the Premier League’s most effective players right now.

.@MarcusRashford is in some serious goalscoring form 🔥 pic.twitter.com/2Qgk8GyIOc

His devastating runs from outside to in have tormented the division’s defences this season and the England international is on course to eclipse the best goalscoring campaign of his career (22).