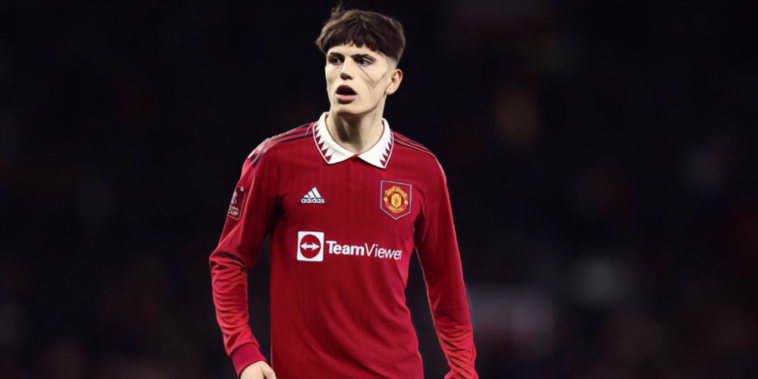 Garnacho has had a breakthrough season at Manchester United with the teenager having had a regular role in Ten Hag’s plans, impressing with his impact in the final third.

The 18-year-old – who was disciplined by Ten Hag during pre-season – came off the bench to set up Marcus Rashford’s winner in Saturday’s Manchester Derby and has averaged a goal or assist every 95 minutes across his 15 appearances this season.

Speaking ahead of the club’s trip to Crystal Palace on Wednesday, Ten Hag praised Garnacho’s development.

“He has a skill that I don’t see many players in the Premier League having — he beats players one on one,” the Dutchman said at his pre-match press conference.

“He’s learnt in the last months about how to play in a team, how to live, how to do the right things in the week, how to have the right attitude on the training ground and you see how he’s acting as a team player and with his individual skills that can make the difference.

THIS CITY IS OUR CITY!!❤️❤️@ManUtd

Assistance to one of the best in the world right now@MarcusRashford 😉 pic.twitter.com/EA46yHa0xz

“Also for him it’s to keep going in the process. It’s not done. There is a lot to come. There is a lot of room for improvement with him but he can help, he can contribute on the highest level already and I’m really happy.

“It’s a bonus for us as a club that you bring in young players and they can come not only into the squad but the team and I think that is a part of our project that has to contribute to our success.”

Ten Hag also praised the performances of Luke Shaw in recent weeks, with the full-back having impressed in an unfamiliar centre-back role. The England international has returned to form and favour after a difficult start to the season and Ten Hag believes the 27-year-old is a leader in his squad.

“I like that he’s so honest,” added Ten Hag. “After the second game he didn’t play and said: ‘I fully understand, my performance is not right’. But from the first day in training at pre-season he was working really hard and you can see when he has the right approach he’s a top players.

“I don’t mean only as a team player, he’s a leader. He’s showed a lot of leadership capacities — he’s the example at this moment — and with his skills and with his physical power he brings a lot to the team. But now also with his mentality. He’s an example of how to win big games. I’m really happy with his development. I think it’s been huge either at centre-half or left full-back, he’s a great player and a great personality for the dressing room.

“It was a big decision (to play Shaw at centre-back against City) but I think when you analyse the profile of Haaland and the combination with (Kevin) De Bruyne it was also the right decision because Luke has the physical power to compete with them and also has the tactical view to make the right decision and technical skills to play in that position.

“I think (against City) it matched really well but I think in other games he can contribute even more on the left in the wide positions so it’s a tactical choice and we can see from game to game what we need. And I think we have more players in our squad who have the capacity to be multi-functional and we can use that as a weapon in games.”